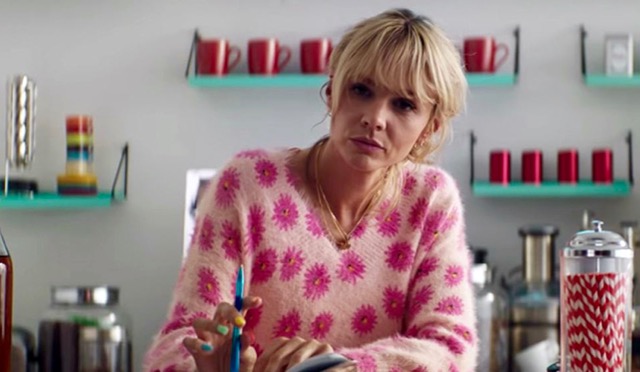 Where to Watch:Rentable on Amazon Prime

She Said: This black comedy suspense film from emerging creative powerhouse Emerald Fennell (Call the Midwife and The Crown) brought to mind the aphorism attributed to Margaret Atwood, “Men are afraid women will laugh at them; women are afraid men will kill them.” The film opens with Carey Mulligan’s Cassandra apparently drunk out of her wits, alone in a club, unable to find her phone. Three dude bros drinking at the bar notice her, and while two of them immediately start the lewd talk that includes a healthy dose of blaming her for anything they do to her while she’s drunk, the third, Jerry (Adam Brody from TV’s The O.C.), shows discomfort with the lewdness of their chatter and goes over to her to make sure she’s all right. He offers her a ride home, but in the ride share, he talks her into going to his place on the way for a drink. Plying her with a big glass of liqueur, he starts making out with her and transfers her to his bedroom. Once there, she asks him what he’s doing and expresses resistance, which he doesn’t heed. It turns out Cassie isn’t drunk at all, and when she demonstrates that the scene ends and we’re left wondering what happened to dude bro, aside from his shock and horror that his sex partner isn’t bombed out of her mind and might indeed be able to resist the sex he’s going to have with her.

I couldn’t help but think of Cassandra in Greek mythology, cursed to warn society of the bad things that would happen but not to be believed. Not only did people not listen to her, but they disliked her for sharing all the bad news. Promising’s young Cassandra is very similar, but her warnings take the shape of more or less complicated incidents in which she tries not only to avenge the rape of her best friend several years earlier, but also to make this revenge a real and meaningful learning opportunity for those who didn’t listen to the victim when the rape occurred—and who still aren’t listening now. Cassie’s got a book she records the names of those she’s tried to teach something to. The list is so long, the hashmarks go on for pages and pages. The task feels Sisyphian … never to be accomplished.

At her coffee shop job, Cassie runs into a former med school colleague, who is a pediatric surgeon now. He brings up a lot of names we can see are hard for her to respond to with polite conversation. And they begin a romance that we think may help bump Cassie out of her revenge lane. Even her friend’s mother tells her to let it all go and move on; no one can take her single-minded obsession with this pivotal event anymore. Her parents are so wildly hopeful over her new relationship for their 30-year-old daughter because their worry for her has been profound. She had obviously walked away from a very promising future.

But pulled back in time by her reacquaintance with her med-school alumnus boyfriend, Cassie hatches her biggest plan yet and executes it. The fulfillment of which brought confused tears of so many emotions to my eyes. It’s heartbreaking, satisfying, and most of all, validating. As a woman who knows that to navigate the world safely, I must make myself someone no man wants to attack…because that’s where the responsibility always seems to lie, on women, I felt more seen by a movie than I think I ever have in my life.

He Said: Dark comedy is one way to describe this film, and seems a fitting description of the first two thirds of it. But things take a still darker turn when Cassandra’s new old med-school boyfriend Ryan (Bo Burnham from The Big Sick) lets it drop that Cassie’s friend’s rapist, Al Monroe (Christopher Lowell of TV’s Glow) is about to get married. Cassie’s revenge-o-meter kicks into high gear, and the movie, or at least Cassie’s tight control of her well-planned retribution scenarios, lists toward chaos. The denouement is devastating, but somehow satisfying at the same time.

Fennell has been nominated for Golden Globes for both her screenplay and her direction of this film (one of an unprecedented three women nominated for the director award this year), and Carrie Mulligan for a Best Actress award. Mulligan is absolutely mesmerizing in this role, and coming as it does at essentially the same moment as her moving portrayal of the Sutton Hoo landowner in The Dig, it demonstrates her amazing range as an actor. It would certainly be no surprise to see her nominated for an Oscar for this role too.

Cassie’s quest for justice is in some ways heroic. At the same time, her obsession with revenge has eaten up her life—she dropped out of medical school, lives at home with her parents at the age of 30, and works in a coffee shop. She has no friends and no real relationships, and her reacquaintance with Ryan looks momentarily as if it may save her. But that breaks down. I have one question for you, Jones: We see a scene in which Albert Molina, playing the rapist Al’s defense attorney, admits that his actions were despicable, and demonstrates he lives in anguish, tormented by his sins. As a result, Cassie essentially forgives him, and calls off her revenge plot against him. If the lawyer can be forgiven, what about Ryan? Why shouldn’t it be in Cassie’s interest to forgive him as well?

She Said: The difference is in their own repentance and remorse. Molina’s character acknowledges his part in protecting the toxic masculinity that perpetrates these acts. But Ryan denies and defends himself. The refrain of “we were just kids” and “that’s what things were like,” and “what did she expect?” were used by many characters who wouldn’t face the part they played in wronging another. True to the classic comedy structure of characters who either join the new order or are defeated to create the new society, Molina’s attorney comes to Cassie’s understanding of the world.

But in terms of forgiveness, yes, they should all be forgiven. Cassie sacrifices her own potential in order to perpetrate consequences for all these characters, when wiping clean the debt they owe her would have served her much better. But women often sacrifice their own wellbeing trying to warn society of its noxious and poisonous ills.

He Said: Well actually (like that mansplaining opening?) I’m pretty sure they shouldn’t all be forgiven. Certainly not Al and his enablers. Even Albert Molina (I admit I raised the question as a kind of devil’s advocate) may not be truly forgiven, but Casandra spares him her own vengeance because he is already tormented daily. Basically he is in hell now, and nothing she can do will bring him out of it. Ryan, though, may only be guilty of having walked into the room to see what the commotion was about, and then not having had the moral courage to do anything about it in the midst of the mob psychology that was predominating. But then, a lack of moral courage is not exactly a good recommendation for a committed relationship, is it?

That “new society” reference is really interesting with this film. Is there really any new society at all in the end? Maybe there’s a distinction between those who accept their culpability (the new “chastened” society) and those who don’t. But it may be more tragic than comic in the end. Maybe that accepted culpability is the anagnorisis, the knowledge that comes through tragedy.

She Said:I give this four Hitchcocks. Please see it. Carrie Mulligan is once again perfection in a stunning film by Emerald Fennell.

He Said: I’ll ditto your four Hitchcocks. This is a film that deserves its “Best Picture” Golden Globe nomination. It raises all kinds of questions and makes us take a hard look at a society that gives tacit acceptance to toxic masculinity, and also consider just what kind of response might be acceptable.

This Week’s We Watched It and You Should Too:
He Said: One Night in Miami
Hot Take: Here’s another film by a woman director nominated for a Golden Globe. Regina King  directs a screenplay adapted from Kemp Powers’ stage play (the limited setting and long conversations give you the sense of a play throughout) depicting a fictional account of a meeting in a Miami hotel room between Cassius Clay (the soon-to-be Muhammed Ali), Malcolm X, Jim Brown, and Sam Cooke, following Clay’s upset victory over Sonny Liston to win the heavyweight boxing championship of the world. The characters discuss their views of, and their contributions to, the civil rights movement then reaching its peak. The film is fascinating and thought provoking, particularly in the conflict between Kingsley Ben-Adir (of TV’s Vera and Peaky Blinders) as Malcolm and Leslie Odom Jr. (Hamilton’s Aaron Burr) as Sam Cooke, who seem to represent the two extreme poles of the movement. This is definitely one you ought to see.

Here’s what the book is about:
When Sir Agravain leads a dozen knights to arrest Lancelot in the queen’s chamber, he kills them all in his own defense-all except the villainous Mordred, who pushes the king to make war on the escaped Lancelot, and to burn the queen for treason. On the morning of the queen’s execution, Lancelot leads an army of his supporters to scatter King Arthur’s knights and rescue Guinevere from the flames, leaving several of Arthur’s knights dead in their wake, including Sir Gawain’s favorite brother Gareth. Gawain, chief of what is left of the Round Table knights, insists that the king besiege Lancelot and Guinevere at the castle of Joyous Gard, goading Lancelot to come and fight him in single combat.

Ada Limón’s “Love Poem With Apologies for My Appearance”