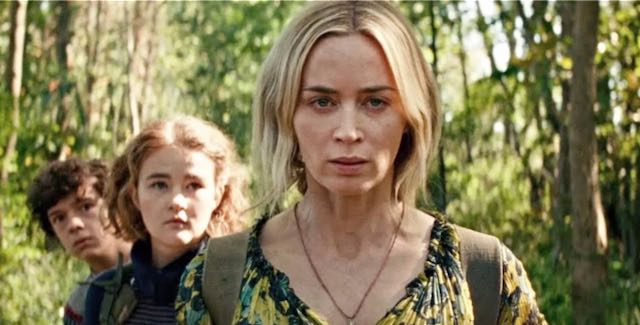 Where to Watch: Exclusive to theaters

She Said: I’ve been waiting for this film since it almost came out in 2020. When the pandemic shut down theaters, I was waiting for A Quiet Place II to hit a streaming service near me, expecting to pay $20-plus in rental fees to hunker down and see it. But its distributor, Paramount Pictures, kept the film back. It’s what motivated us to finally venture out to a movie theater for the first time since last February to see this film in person.

And it was worth our vaccinated trip. If you haven’t seen A Quiet Place, this prequel/sequel can stand on its own, but gives you the opening situation of the scenario the first film depicts (although not much information about how or why) as well as what happened after the first installment ends. Evelyn (Blunt, of The Devil Wears Prada fame) takes her family to find others in the apocalyptic world in which the slimiest of lizardy alien creatures descend on and kill humans if they make any noise louder than the press of bare feet on pebbled pathways. She and her children know there are other people out there, and with her home destroyed, widowed and with two teens and a new baby, she seeks the safety of community.

As with all quests, the Abbott family finds obstacles and new quests along its journey, friends and foes. I don’t want to spoil anything, but I will say that it’s been awhile since I screamed aloud in a movie theater from sheer shock and fear (maybe not since Aliens in 1986, when my high school friend Kim jerked so hard away from what she saw on screen that her glasses flew four rows back in the movie theater). I’m not much of a horror movie aficionado, but this one seemed to be working.

He Said: Funny you should mention Aliens, since I’m pretty sure that’s the effect Krasinski was going for—that jump-out-of-your-seat reaction to the sudden blitzkrieg assaults of thee aliens who look, to be honest, an awful lot like those creatures from the Alien series.

I agree that the first sequence, the “Day 1” prequel, in which the ballgame is “called on account of alien invasion,” is probably worth getting out of the house and going to a big screen at long last. The fast-paced action sequence is a thing of beauty and of terror. When the scene shifted to “Day 471” or so, I started to get the feeling of déjà vu all over again. We did know that other people had survived the alien onslaught, since Lee (Krasinski) exchanged signals with some of them in the first movie. In the sequel, we get to see how some of these people have survived. We meet again Cillian Murphy (The Dark Knight) as the Abbott family’s neighbor Emmett, who we met in the bleachers in the opening sequence, and who may be the chief purpose for having that sequence at all. Emmett doesn’t want to help them and wants them to go away—and in speaking of others who may have survived so far, he says coldly, “They aren’t worth saving.” Later, in fact, we meet some of those types. It’s a whole lot like The Walking Dead, where some of the other survivors in the Post-Apocalyptic world are worse than the monsters themselves.

Mostly I felt like the plot devices in this sequel all had the chief purpose of putting characters in situations where they had a good chance of meeting the alien monsters and had to 1) Be vewwy vewwy quiet; 2) Use some kind of electronic device with really loud feedback to paralyze the monster; and 3) Blow the monster’s head apart with a shotgun/rifle/pistol blast. This happened in the first film, and it happens a lot here. I will admit that Krasinski makes clever use of these motifs late in the movie when he has three parallel scenes in each of which one of the characters is trying to avoid the monsters, and he cuts back and forth between different scenes in a way that heightens the suspense exponentially.

Also, it seemed to me that the deaf teenaged Abbott daughter Regan (why name her after one of King Lear’s patricidal daughters?), played with impressive verve by Millicent Simmonds, makes an incredibly foolish decision to go off by herself to find an island of survivors somewhere “beyond the sea,” a possibility suggested to her by a radio broadcast that keeps repeating the Bobby Darrin song. It seems we are supposed to be admiring her initiative and gosh-darn pluck, but basically she gets a lot of people killed, so what was the point—except to create those situations where we might jump from fright?

You got any defense of these things, Jones?

She Said: This movie can’t be good at what it’s good for, Ruud, if it doesn’t suck you in and freak you out! And that to me is the value of the film, aside from a chance to enjoy my current favorite married couple of movie makers, Krasinski and Blunt. I loved this film as a suspense movie, largely because I care so much about the family at its center. The writing provides the fear and trembling, and the performances motivate me to care what happens to these people in a genre of film I generally dislike.

Three Soderberghs and half a Hitchcock for this one.

He Said: It is definitely good at making you jump, and I do like some of the thoughtful touches, like the way all background music or noises cease and the film is completely silent when we are seeing (and hearing) things from the deaf girl’s perspective. I can’t completely get over those plot holes or the sense of “this again” that some of the film gives me. At the risk of sleeping I the guest room tonight, I’m going to go with two Michael Bays and half a Soderbergh

This Week’s We Watched It and You Should Too:
He Said: Mare of Easttown
Hot Take: If you missed this series, what the heck have you been doing for the past couple of months? The final episode aired on HBO Sunday night, so you can now start at the beginning and binge the whole series (which is my personal preference anyway). There are a lot of cop/crime drama clichés in the series’ conception, but Kate Winslet is brilliant as an ex-high school sports hero now working as a detective in this working-class suburb of Philly (you can imagine Sly Stallone popping up just around the corner) where young girls are going missing o turning up dead. Mare knows everybody in town, and they all seem to be intertwined in one another’s lives. There are lots of twists and turns and red herrings that keep you guessing until he very end of the very last episode Definitely worth a watch—it’s a series that’s good for what it’s good for, as my awesome wife likes to say.