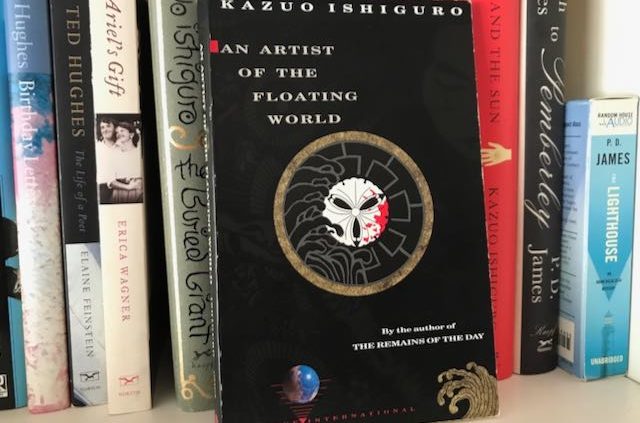 An Artist of the Floating World

Ishiguro’s second novel is not as well known as his Booker-prize winning Remains of the Day, or his popular and acclaimed Never Let Me Go, but it is in An Artist of the Floating World that Ishiguro hits the stride that will eventually lead him to his 2017 Nobel Prize in Literature. In his first novel, A Pale View of Hills, Ishiguro had included a sub-plot in which a former teacher is forced late in life to rethink the values according to which he had lived his whole life, and the author has commented that this was the seed for his following book, in which he devotes the entire narrative to a former significant artist reevaluating his life’s choices.

That protagonist and narrator is an aging artist who, as a producer of propagandistic art for the extreme right-wing party in Japan in the 1930s, did much to empower and justify the politicians who led the country to defeat in the Second World War. In particular, Ono was concerned with what he refers to as the “China crisis,” by which he seems to refer to the Sino-Japanese war of 1937-45—a war for which high officials in the Japanese government were convicted of numerous war crimes in post-war Tokyo trials, and a war in which Ono lost his son Kenji. Ono also lost his wife in an air raid at the very end of the war. The narrator never deals with either of these deaths in this book, and one wonders just how much those losses may be affecting him beneath the calm, unruffled surface of his unemotional narrative.

This is definitely a novel that conforms to Hemingway’s famous description of writing on the principle of the iceberg, only one-eighth of which is above the water, while seven-eighths is below the surface. Below the surface of Ono’s words—even, perhaps , his conscious thoughts in this novel—there lies the bulk of his life’s meaning. The story of the novel takes place on selected days over the course of about a year and a half in Ono’s life: Part one is set in October 1948, part two in April 1949, three in November 1949, and the relatively brief part four in June of 1950. The inciting incident for the narrative, which serves as Ono’s incentive to reexamine his own past, is the looming engagement of his younger daughter Noriko.

We learn that in the previous year, Ono had been in negotiations with the family of Jiro Miyake to marry Noriko to Jiro, which, it is implied would have been a love match. Those negotiations had broken down, however, and the Miyake family had pulled out. The reason those plans had broken down is unknown, but it is certain that Noriko believes her father to have somehow been responsible for the breach. In this she seems to be supported by her older, married sister, Setsuko (who is visiting from out of town with her son Ichiro as the novel begins). Setsuo is the more diplomatic and more deferential daughter, and hence more traditional than her outspoken sister Noriko, but both sisters are concerned that the same rejection does not happen with Noriko’s new potential marriage to Taro Saito. They advise Ono to make sure that none of his acquaintances might have negative things to say about him when private investigators for the Saito family question them about Ono’s character.

This is what sets Ono on to track down some of his old acquaintances. In doing so he relives his previous life, and we see the path that led him into what the younger generation in 1948 Japan, under the influence of American occupation, now sees as treasonous. We explore Ono’s memories of his childhood, his love of painting encouraged by his mother but squelched by his authoritarian father. We learn about his recruitment by the influential artist Seiji Moriyama, or “Mori-san,” who runs an art school at his run-down villa where a handful of young artists study under his direction. It is Mori-san who teaches that the transient beauty of late-night moments in the pleasure districts of the city, among the bars and the Geishas, are the ideal themes for painting. This he calls the art of the “floating world.” The phrase, it has been pointed out, is an English translation of the Japanese term Ukiyo-e, a style of painting and printmaking popular in the Edo period, at least a century earlier than Ono’s memories. The word Ukiyo, originally referring to the Buddhist notion “transitory,” was replaced by the character meaning “to float” in order to express the hedonistic joy artists wanted to glorify in their depiction of the pleasures of those evening debauches. Mori-san wants his pupils to engage in this old-fashioned style, but also wants to incorporate new western techniques, using blocks of color to replace the dark outlines traditionally used in Japanese prints. Mori-san expels any students who do not adhere to his teaching. But the decrepit state of his villa suggests the outmoded nature of his technique.

Ono recalls, too, his recruitment by the nationalist Chishu Matsuda, and how soon after their meeting he began to take a new direction in his painting, becoming more socially aware, becoming, too, more militant and nationalistic, after which he was cast out by Mori-san.  Apparently through the influence of Matsuda, Ono then worked with the nationalist government during the war, helping to create propaganda in the form of posters during when he refers to as the “China crisis,” presumably to build support for the war in Manchuria in which his son was to lose his life. Ono’s work won various awards, and he was later appointed to the Cultural Committee of the Interior Department. We learn, too, that Ono acted as a police informer, betraying one of his own students, Kuroda, to the “Committee of Unpatriotic Activities” when he disapproved of Kuroda’s less nationalistic bent in his art. Kuroda ended up going to prison, and declines to ever meet with Ono after the war.

Ono’s recounting of these various activities is quite matter-of-fact, and while readers may feel a distaste culminating in a kind of appalled horror as the revelations become more explicit, Ono seems oblivious to his own culpability in the national disaster his activities helped contribute to, or the personal suffering he caused for Kuroda—or even, indirectly, the death of his wife and son. But it’s clear by the time we are well into the book that this narrator is highly unreliable: we are certain that we cannot trust his evaluations of his own past actions, and when he surprises us at the crucial meeting with his potential son-in-law’s family when he actually admits he made mistakes during the war, it becomes clear that we can’t trust that he even believes what he is saying in his narration. But when later in the novel his daughter Setsuko calls into question things he has told us about his own conversations with her and others, we come to realize that it is possible all of his memories have been distorted by his own consciousness. Was he as important as he tells us? Did he even have some of the conversations he claims to have had? Has time rewritten his own life story in his mind?

In the end this is a brilliant tour de force in the realm of unreliable narration. It’s also a vivid picture of post-war Japan, and the changing cultural values. Noriko depicts the “modern” woman and Setsuko the traditional. Ichiro, whose relationship with his grandfather is one of the more lighthearted aspects of the novel, is a young boy completely immersed in new western values, with his interest in cowboys and in Popeye cartoons. In this child, Ishiguro seems to be channeling some of his own childhood in postwar Nagasaki, though the boy’s obsession with the new Godzilla movie is anachronistic (since the film did not come out until 1954, the year Ishiguro was born). But more than anything else, this is a novel that explores human beings’ great skill at fooling ourselves, and rearranging memories to fit our own later interpretation of things, and our reluctance to come to terms with our own failings in a world that is forever changing, forever transitory, forever “floating.” Four Shakespeares for this for sure.