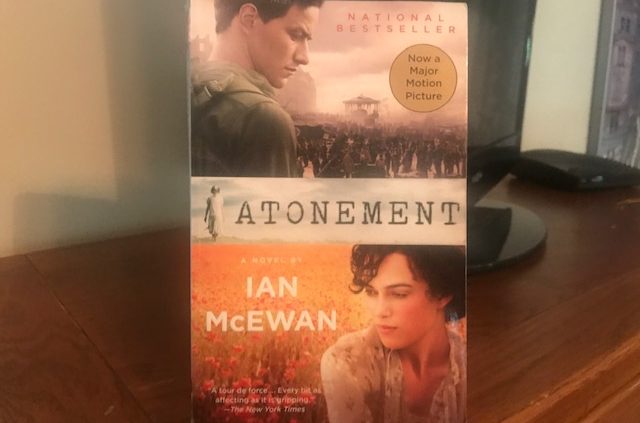 If you have read much of acclaimed contemporary novelist Ian McEwan’s work, you are well aware that Atonement, which did not win the Booker Prize, is a much better novel than his Amsterdam, which did win it. (Shortlisted in 2001, Atonement lost out to Peter Carey’s impressive True History of the Kelly Gang.) A wider ranging and thematically more challenging book, Atonement is the novel that McEwan seems destined to be remembered for, at least at this point in his career.

Anyone coming to the novel at this point in time is likely to have seen the 2007 Joe Wright film, nominated for seven Oscars, and so you may already be familiar with the outline of the plot, including its concluding twist. But I’ll try not to include many serious spoilers here—if that’s even possible with a book like this.

“Atonement” is of course a theological term, and refers to action taken to correct or repair the damage done by a previous wrongdoing, or injury one may have done to another. In Judaism, the holiest day of the year, Yom Kippur, is the “Day of Atonement,” prior to which one seeks forgiveness for wrongs done against God as well as those done to other people. Some Christians also engage in individual penance to help atone for sins, while in general Christianity teaches that the suffering and death of Jesus was performed as an atonement for the sins, the wrongs, done by the entire human race. In reading a book entitled “Atonement,” then, we can be pretty sure what we’re going to read about is somebody seriously wronging another, and ultimately attempting to repair the damage done by that wrong.

In this novel, the wrongdoer is a thirteen-year old budding author by the name of Briony Tallis. Briony lives on her parents’ estate in Surrey. When the novel opens in 1935, her sister Cecilia has just returned home from Cambridge. Her mother, suffering from migraines, and her father, a largely absent civil servant, are shadowy presences in her life, while the son of the family’s cleaning lady, Robbie Turner—who has also just returned from Cambridge, though with a First in English literature in contrast to Cecilia’s Third—is a more significant figure. Robbie, having caught the eye and interest of the Paterfamilias, was put through school via the noblesse oblige of the old man, and now is hoping to continue into medical school. There’s a sexual tension between Robbie and Cecilia that you can cut with a knife, but there’s a bit of a problem since the younger sister Briony has an adolescent crush on Robbie that he has tried to discourage.

On this particular day, the sisters are expecting from London their older brother Leon and his friend Paul Marshall (whose company has just invented a candy-coated chocolate that they hope will be a part of every British soldier’s kit bag). Also expected are their young cousins Pierrot, Jackson, and Lola Quincey, whose parents have separated and who’ve been sent to the estate to get them out of the line of parental fire. Lola is a year older than Briony and the two boys are younger twins, and Briony wants their help in performing for the rest of the house a verse play she has just written called The Trials of Arabella. If this all sounds a bit like Mansfield Park, it’s no accident. McEwan has put Austen in our heads with his lengthy epigraph from Northanger Abbey, beginning with the suggestive “Dear Miss Morland, consider the dreadful nature of the suspicions you have entertained….”

As the opening section of the book continues at its leisurely pace, we’re reminded not only of Austen but of Virginia Woolf and perhaps Waugh and ultimately Forster as well. One of the things the book is about is perspective: At one point we see through the eyes of the soon-to-be lovers Robbie and Cecilia as they quarrel over the breaking of an expensive family vase whose handle has fallen into a fountain; Cecilia in a pique strips down to the undergarments to wade into the fountain to retrieve it. At another point we are seeing the same event through gaze of young Briony, who sees but does not understand this adult world to which she longs to be initiated but remains outside of looking in. She interprets the scene as the humiliation of her sister by a sexually dominant Robbie. Robbie writes an apology to Cecilia and gives it to Briony to deliver, but unfortunately he has made the Freudian slip of sending an obscene draft he had written as a lark rather than his intended apology—a draft Briony reads. When later she also surprises Robbie and Cecilia in flagrante delicto in the library, she is convinced that Robbie is a sick sex maniac.

All this would merely be amusing, and we’d read it as a step in Briony’s maturing and her sexual education, if it weren’t for what happens later: When the entire household is off searching the grounds for the twins, who have taken off for home, Briony runs across her cousin Lola in the dark, being sexually assaulted. Lola claims not to have known who assaulted her, but Briony is convinced the culprit is Robbie. It is her Northanger Abbey moment. Despite Cecilia’s protestations to the contrary, the entire family unites behind Briony’s claim, which she maintains against all interrogations. It was Robbie. She saw him with her own eyes. And here’s where the book is also about class. As far as the family is concerned, who else could it have been? Robbie’s the son of a housekeeper. He’s not “one of us.” The police take Robbie away, and on Briony’s testimony alone (and the supporting evidence of his own foolish note), he is sent to prison.

Part two of the novel jolts us out of the glittering summer of the British countryside and into the fog of war. It is five years later and Robbie, paroled from prison in order to fight, like the other working-class blokes, is in the war that will make Paul Marshall yet richer. Gone are Austen and Woolf: We are in a gritty, hyper-realistic retreat to Dunkirk that’s more Hemingway or Stephan Crane (or Frodo and Sam dragging themselves through Mordor) than it is Kipling. Robbie is wounded, but heaves himself mile after mile to the burning Dunkirk, wanting only to get back to Cecilia, who has deserted her family and is in touch with him. Helping two out-of-their-depth corporals along with his own grit and determination, Robbie at last reaches the beach and finds there an army that “wandered about the sands without purpose, like citizens of an Italian town in the hour of the passeggio.”

And then part three: Here a grown-up Briony, tormented by her earlier perfidy and its consequences, has decided as a kind of expiation for her sins to put off Cambridge and train as a nurse in a London hospital, helping with the glut of wounded coming back from France. She is able to discover where he sister (also serving as a nurse) is living, and visit her, receiving a cold shoulder from Cecilia and from Robbie, who is here on a short leave from France. Briony says she will go to the authorities and withdraw her statement that sent Robbie to prison. She is not forgiven, but promises to do all they ask in atonement.

But wait. There is a part four, that takes place six decades later. Here an octogenarian Briony, now a well-known novelist, discusses her latest book—which, it is implied, we have just read. And here we discover that the novel is also about fiction itself. How much of what we have just read is true, and how much of it is the invention of the (fictional) author? And how much of that invention is in fact a gesture of atonement? You’ll need to read the book to find out. And to find out how much you yourself are willing to forgive Briony. Or McEwan.