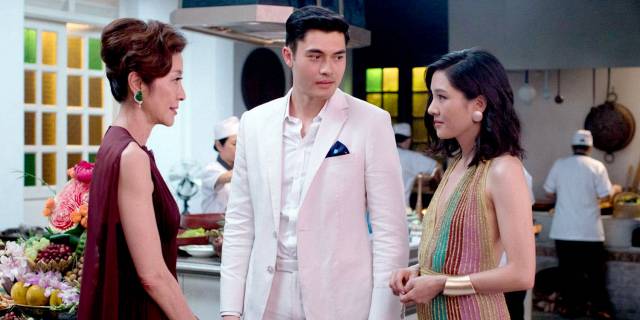 It’s a phenomenon worth remarking upon, as movie critics nationwide have already done, that Crazy Rich Asians, the box office champion for two straight weeks, is not a blockbuster superhero or action film but is, in fact, the first Hollywood movie with an all-Asian cast since 1993’s The Joy Luck Club. This is certainly a remarkable and surprising development, and one that has not been lost on Chinese-Americans, who reportedly see the movie as “empowering,” no less than African Americans saw Black Panther’s Wakanda as the Promised Land. At this point in history it’s a shame to have to say so, but there is no denying that this is a significant step in Hollywood’s social development. Who knew there were talented Asian actors out there somewhere? Who knew you could make a movie about Asians falling in love just like other people?

Okay, so I’m being just a little bit sarcastic, but it’s been within my lifetime that Hollywood decided Yul Brynner should play a Siamese king and Marlon Brando a Japanese houseboy—and that Mickey Rooney should give perhaps the most racist portrayal ever caught on film of an Asian neighbor in Breakfast at Tiffany’s. But then, admittedly, I am pretty old.

Speaking of Audrey Hepburn reminds me that there is yet another significant aspect to this new box-office champ: It’s the first highly successful Hollywood-produced romantic comedy in ages. Last year’s The Big Sick, a popular and critical success in no small degree, was an independent film (which, coincidentally, also featured Asians in significant comic roles). Where are the When Harry Met Sally’s and the Sleepless in Seattle’s of the 2010’s? Where, for that matter, the It Happened One Night’s and the Bringing Up Baby’s? Romantic comedies, for decades the bread and butter of the American film industry, are few and far between these days. The last really successful Hollywood rom-com that I can recall is 2012’s Silver Linings Playbook, which had the detail of the main characters’ bipolar issues to give it a unique twist. Crazy Rich Asians is actually a return to the more traditional rom-com formula—except, I guess, with Asians as the twist.

Just why Hollywood has all but given up on the rom-com genre is a complex question with, I am sure, highly complex answers. But since the bottom line governs all in the industry, it must be surmised that they have not found the genre lucrative. In part this may be because the typical audience for such films, assumed to be adult women, perhaps of middle age, just don’t go to the movies as much as they used to. This explains a film like this year’s Book Club, which featured four quite mature women still interested in a love life. That movie found an audience, but to tell the truth was really not very well written. It’s as if Hollywood can’t remember how to make such films any more, so when they do produce a badly-done rom com and it isn’t successful, they assume it’s the genre’s fault, not the writing or directing or acting. But the success of the remarkably well-written Big Sick proves that thinking wrong. And the surprising success of Crazy Rich Asians should be a good excuse to revitalize what has always been a very viable Hollywood genre.

The plot of the current film, based onKevin Kwan’s best-selling 2013 novel of the same name,follows Rachel Chu (Constance Wu of TV’s Fresh Off the Boat) who is a young professor of economics at New York University as she accepts an invitation from her boyfriend (do they still call them that?) to accompany him to his best friend’s wedding back home in Singapore. The boyfriend is Nick Young (newcomer Henry Golding), who unbeknownst to Rachel happens to be the son and “crown prince” of the most outrageously wealthy Chinese family in Singapore.

Rachel may not know who Nick is, but others certainly do, and as the couple sit in a New York diner, they are recognized by a pair of Chinese American millennials and before you can blink twice, their picture is all over social media and friends of friends of friends have been contacted all over the globe, and the news even ends up in the feed of Nick’s redoubtable mother Eleanor (Michelle Yeoh of CrouchingTiger, Hidden Dragon). Mom takes an immediate dim view of this upstart American nobody trying to sink her claws into the family’s golden boy, and is prepared to be as unwelcoming as possible when Rachel arrives.

Rachel gets a hint of her boyfriend’s actual wealth when she gets super-first-class treatment (a private bedroom on an airplane?) on the flight overseas. “Your family is, like, rich?” she asks him at this point. Duh. “We’re…comfortable…” he says ingenuously, which is of course exactly what he would say if he were Bill Gates’ son, or one of the Arkansas Waltons.

Since the warm-hearted Eleanor has told Nick that the house is being redone so there’s no room for Rachel to stay there,Rachel and Nick stay in a hotel. Meanwhile, Rachel reconnects with a college friend of hers who also lives in Singapore. This friend Peik Lin (played with comic abandon by Awkwafina, most recently seen in Ocean’s Eight) and her a nouveau-riche manic family, headed by a most manic Ken Jeong (TheHangover), clue Rachel in on just who it is she is dating—after they’ve picked their jaws up off the floor.

The film is essentially a Cinderella fairy tale story, with Peik Lin acting the part of the fairy godmother, who finds Rachel’s clothes for her to make sure she doesn’t look like a pumpkin when she goes to the ball, or the party at the Young family mansion and museum. And there are certainly wicked stepsisters in the form of Singapore socialites connected to the Young family for whom Nick is the Holy Grail of eligible bachelors, and who make it quite clear that they’d like Rachel gone. Most formidable, though, is Eleanor, who fills the role of Cinderella’s wicked stepmother and insists that Rachel is “not enough” for her son.

I won’t give away more of the plot, but you can probably guess how it’s going to turn out. It’s a rom-com, after all. Director Jon M. Chu (mainly known for directing Justin Bieber movies) does raise some interesting social issues, though: Eleanor is not simply a motivelessly wicked stepmother. Her problem with Rachel is that she, as the American-born child of a single mother who had to work hard to achieve the distinction of being the youngest professor at NYU, is more concerned with pursuing her own individual happiness than sacrificing for the sake of the family—the traditional Chinese way. At least that’s what Eleanor says. It often seems as if she is just using that as an excuse for being a snob.

Wu is charming and sympathetic as Rachel. Golding comes off a bit bland as Nick. Eleanor is the deepest and most dynamic character in the film, and Yeoh is memorable in the role Awkwafina is a standout in the “supportive friend” role, as is Nico Santos, who plays Nick’s gay cousin, “the rainbow sheep of the family.” The most sympathetic of all Nick’s family is the glamorous Astrid (Gemma Chan of Fantastic Beasts and Where to Find Them), whose story forms a kind of parallel to Nick and Rachel’s since her own marriage to a “commoner” is failing.

One thing that did bother me about the movie was the nearly obscene depiction of conspicuous consumption. I suppose it’s there to show how Rachel might be tempted to go after Nick for his money and give up her own values. But the film does seem to present this wealth and its excesses as something one might consider as a perfectly desirable and legitimate way of life for its own sake, one that Rachel never actually rejects. And that seemed problematic to me.

In the end, Crazy Rich Asians is not It Happened One Night. It’s not When Harry Met Sally either. It isn’t even The Big Sick. But it’s a serviceable and entertaining romantic comedy that at times even makes you think a little. Three Tennysons for this one.