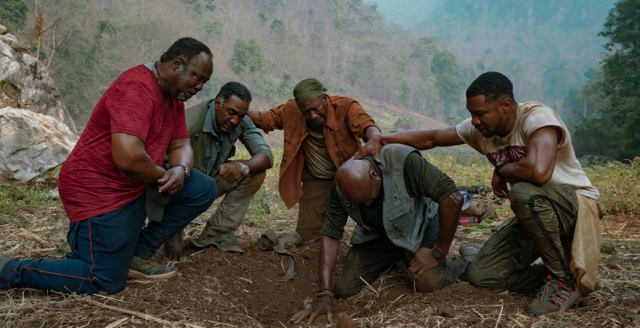 During the Vietnam War, African Americans comprised about 11% of the total U.S. population, but at one point made up 32% of the soldiers serving in combat. During the period from 1966 and 1969, when the defense department increased the draft in order to build up troops in Vietnam, some 41% of those drafted were Black. After this situation was decried by protesters, adjustments were made. The abolishment of college student deferments in favor of a draft lottery changed the character of the draftees and evened out the biases, but ultimately the total number of black combat deaths remained disproportionate to the population, at least in the bloodiest years.

Despite this history, none of the most significant Vietnam war movies—The Deerhunter, Apocalypse Now, Platoon, et al.—have focused on the black experience in Vietnam. Until now: Spike Lee’s latest effort, Da 5 Bloods, now available streaming on Netflix, closes that gap, and does so in a memorable way. This is the first great film of this bizarre year of 2020, and it comes, not accidentally, against a backdrop of cultural revolution in response to systemic racism embedded in American society and whitewashed in American history, including the way that history has been memorialized on film.

Spike Lee has certainly been doing his best to adjust that particular lens with films like Malcolm X or 2018’s BlacKkKlansman.In his latest film, Lee has four black septuagenarian Vietnam veterans meeting in a kind of bucket-list reunion in Ho Chi Minh City (the former Saigon), from where they plan to trek into the jungle in order to recover the remains of their revered squad leader “Stormin’ Norman” (Chadwick Boseman), killed in action on their last mission and buried in the jungle, after they had vowed to bring him home. But it turns out they also left something else in that jungle: a case of gold bars from Fort Knox, worth something in the neighborhood of seventeen million dollars, earmarked as payment to a jungle tribe for their help against the Viet Cong. But the plane carrying the gold was shot down in the jungle, and only the four remaining “bloods” know of its existence. And they have come to retrieve it after fifty years. With Norman’s encouragement, the foursome had agreed upon the laudable goal of using the money to enhance the lives of victims of oppression in their own neighborhoods back home. Think of it as a kind of “reparation.”

But in the decades that have passed, each of these veterans has had his own traumas to bear, and the quest for the gold and for Norman’s remains becomes, as all quests do, a quest into the psyches of the questers. Setting out on the search are Otis (Clarke Peters of TV’s The Wire), who is the de facto leader of the mission, and is dealing behind the scenes with a Vietnamese woman (his former lover) and a French businessman in order to fence the gold; Melvin (Isiah Whitlock Jr., who worked with Lee in BlacKkKlansman), who more than any of the others is trying to make sure everyone gets along; Eddie (Norm Lewis of TV’s Scandal), a businessman who likes everyone to think he’s the most successful of the group, and also (in what becomes an important detail later on) their former medic; and Paul (Delroy Lindo from Lee’s Malcolm X), the most disturbed and dangerous of the group, who is also its emotional center. It was Paul who held Norman as he died. It’s Paul who is still most afflicted by PTSD. It is Paul who wears a MAGA cap, for which he is berated by his fellows but which is merely a symptom of his profound sense of disenfranchisement. We soon find that Paul cannot relate to or reconcile with the Vietnamese people just as he is alienated from his own society, and from his family. The first surprise of the film happens when Paul’s son David shows up, hoping to take the trip into the jungle with his estranged father. David (Jonathan Majors from The Last Black Man in San Francisco), who is Otis’s godson and an African American Studies teacher, just wants to form a bond with his old man, though Paul isn’t really interested. But David becomes, for the audience, a kind of chorus figure, and it is largely along with him that we learn about the past.

The film makes generous use of flashbacks, which are signaled by the switch from widescreen to the traditional TV aspect ratio (a trick that takes those of us who remember those days back to the time when we watched the war on our TV news every night). In the flashbacks, the four veterans play themselves without any technology tricks to make them look younger. It has the effect of underscoring how vividly present those memories still are to the former soldiers. It is in these flashbacks that we get to know the beloved Norman, whom Otis, telling David the story, calls “our Malcolm and our Martin.” Chadwick, who has made a film reputation by playing mythic black heroes like Thurgood Marshall, Jackie Robinson, and James Brown—and the truly mythic Black Panther—is the perfect choice to play the revered Norman, who brought these men together, taught them how to stay alive in the jungle, taught them their own history (from Crispus Attucks to Martin Luther King) and gave them a social consciousness—“War is money. Money is war,” he tells them, and compares their white officers’ use of black troops as cannon fodder to their treatment at the hands of police back home. This is all stuff that David is well aware of, but that Paul and his bloods needed to be woke to in 1969.

There are so many twists and turns in this film that anything more I tell you about the plot takes us into spoiler territory. But unlike the blatant political message of the movie (which you’ve probably already got), one of the most interesting aspects of the film is Lee’s more subtle means of placing the film in context. Actually, into several different contexts.

The film begins with carefully chosen vintage news stills and clips that put us in the milieu of 1969, beginning with one of Muhammed Ali explaining why he refused induction into the U.S. armed forces as a conscientious objector, repeating his declaration that “I ain’t got no quarrel with them Viet Cong. They never called me nigger.” The series of clips also shows members of the Black Panthers in an eerily déjà vu moment decrying police brutality, as well as Stokely Carmichael and Angela Davis voicing opposition to the war. Other iconic images, like the South Vietnam National Police chief executing a handcuffed Viet Cong prisoner with a shot to the head during the Tet Offensive of 1968—an image broadcast into every home across the U.S. on the six o’clock news—and the famous photograph of the screaming, naked nine-year-old girl running in tears from an American napalm attack.

Lee also pays tribute to the films that inspired this one, including a scene that recalls another film about a treasure hunt, John Huston’s The Treasure of the Sierra Madre (“Badges? We don’t need no stinking badges!”), one that recalls the chaotic ending of another movie about a quest through a southeast Asian jungle, David Lean’s The Bridge on the River Kwai (“Madness! Madness!), and most particularly and most often that classic Vietnam War movie, Francis Ford Coppola’s Apocalypse Now, from the beginning of the quest in Saigon, through the boat trip down the river into the interior where they have a nearly disastrous encounter with native boats (and the score blares Wagner’s “Ride of the Valkyrie”).

So much goes on in this film that it’s impossible to do it justice in a short review. But I do want to mention the Terrence Blanchard soundtrack, which alternates classically orchestrated music that swells almost ironically to give a heroic sense to the action with popular music from the time of the war, including six songs from Marvin Gaye’s album What’s Goin’ On, including the title track, stripped of its instrumentation, sung in a single pleading voice of protest and pain.

And I want to mention one more thing: In a film filled with memorable performances (especially from Clarke, who is always worth watching), Delroy Lindo’s tortured, mad, bigger-than-life Paul must be singled out as the first Oscar-worthy performance of the year. In a climax inspired in part by Bogart’s maddened Fred C. Dobbs in The Treasure of the Sierra Madre and in part by no less epic a figure than King Lear, Paul rejects his former comrades, finds it sharper than a serpent’s tooth to have a thankless child, and storms off alone into the jungle, raging in soliloquy face-to-face with the camera as he moves. It’s a sequence worth the price of admission.

Trust me, you won’t want to miss this film. Four Shakespeares for this one.

The Night Watchman
Scroll to top