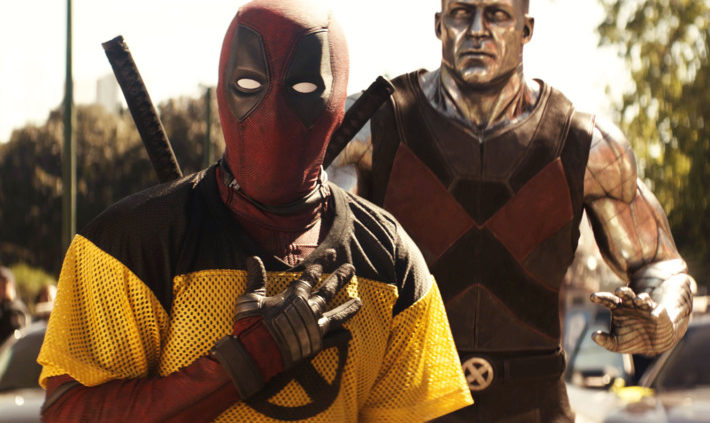 The original Deadpool was clever, irreverent, sardonically humorous and self-referential, breaking the fourth wall with impunity and refusing to take itself seriously. As Wade Wilson, aka Deadpool, Ryan Reynolds created a persona as memorable as any “serious” superhero without being forced to adopt any romanticized moralism or idealistic claptrap. Big crowds came out this past weekend to see how well that formula worked a second time in this week’s Deadpool 2. David Leitch (Atomic Blonde) was tapped to direct the film, co-written by Reynolds with Rhett Reese and Paul Wernick, the writers of the original Deadpoolas well as Zombieland, When Deadpool director Tim Miller dropped out after “creative differences” with Reynolds. What we have in Deadpool2, then, is Reynolds’ film—the distilled essence of what his vision for his superhero character is.

You probably do have to recall the gist of the first Deadpoolin order to be up to snuff as this one takes off. In the “origin story,” Wade Wilson, has just found the woman of his dreams in Vanessa (Morena Baccarin, no stranger to superhero narratives, being a TV veteran of both Gothamand The Flash), when he is knocked for a loop as he is diagnosed with stage-four cancer. In desperation he agrees to subject himself to an experimental treatment, which saves his life by giving him superhuman regenerative abilities, but also leaves him disfigured (“he looks like an avocado” says one character in the current film). He wears a mask and takes on the Deadpool persona, railing against pretty much everything in society in as foul-mouthed a manner as possible and hiding himself from Vanessa—until he finds that she still loves him anyway.

Here in move No. 2 in the Deadpool saga, Wade has got Vanesa but he keeps up the Deadpool persona (retaining that foul-mouthed abuse of the status quo—so let me emphasize that this film definitely earns its R rating with dialogue that’s raunchy but, let’s face it, hilarious). We learn that Deadpool has spent the two years since the release of his first movie by acting as a mercenary, knocking off targets all over the world. He makes the mistake of trying to squeeze in an assassination on his anniversary with Vanessa, and when he fails to do so, the target tracks him down to their apartment and in a furious gun battle accidentally shoots Vanessa and kills her. Heartbroken and blaming himself, Wade/Deadpool decides to end it all six weeks later by blowing himself up.

But dang it, it’s really hard to be a successful suicide when your super-power is regeneration, and Wade’s body parts are collected by Colossus (Stefan Kapičić), the metallic X-Man with the Eastern European accent, and he regenerates in the X-Mansion, exchanging snarky barbs with Negasonic Teenage Warhead (Brianna Hildebrand of TV’s The Exorcist)—whose unusually complex super-title is, by the way, never mentioned on screen, as far as I know, and who I guess we’re supposed to recognize from the comics—and pleasantries with Neg’s new mutant girlfriend Yukio (Shioli Kusuna) who inexplicitly seems to like Wade and whose relationship with Negasonic in the film, though little more than a cameo, has been lauded as the first LGBTQ relationship in Marvel superhero films. Speaking of cameos, Wade’s sojourn at the X-Mansion is relatively secluded, until his post-modern metafictional rant about how they couldn’t afford to pay any of the better-known X-Men to appear in the film is interrupted when he looks through an open door into another room where he sees Professor X, Cyclops, Storm and Quicksilver appear for a brief moment before Beast slams the door in his face. Oh, and while we’re at it, let me alert you that you should keep your eyes open for Brad Pitt somewhere in the film. But don’t blink.

As Wade recovers at the mansion, and tries to envision a meaningful life without Vanessa, Colossus persuades him to join the X-Men—abandon his mercenary ways and join the forces of Good. He decides to give it a shot, but it’s tough convincing Deadpool that he’s not supposed to kill anybody. He joins Colossus and Negasonic T.W. (who never lets him forget that he isn’t an X-Man, he’s just a “trainee”) as they rush off to intervene in a standoff between police and a 14-year-old mutant named Russell Collins, who, for reasons that become obvious, wants to be called “Firefist” (played by Julian Dennison of Hunt for theWilderpeople). Russell is the inmate of a kind of orphanage—a “Mutant Re-education Center,” where young mutants are detained and taught to despise themselves by a fanatical headmaster Eddie Marsan (who worked with Leitsch on Atomic Blonde). Is it just me, or is this a thinly disguised metaphor for camps involved in “gay conversion” therapy? In any case, Wade, trying to talk the boy down, realizes the kid has been abused by members of the staff and without a pause to think shoots one of the abusers through the head. Needless to say, this does not make Colossus very happy, and both Wade and Russell are taken away to be imprisoned in “The Icebox,” an isolated maximum-security prison for mutants in which they are fitted with collars that negate their mutant powers—in Wade’s case, this means his stage four cancer comes back.

It’s at the Icebox that the plot really kicks in, as a futuristic cyber-soldier named Cable (Josh Brolin, currently also being seen as the super-villain Thanos in Avengers: Infinity War, just down the hall in the next auditorium) breaks in and attempts in a subtle, destroy-everything-in-sight manner to find Russell and kill him. Cable, we learn, has come from the future Terminator-like in order to kill Russell before he becomes the mass murderer he is destined to be. Wade, released from his collar in the chaos unleashed by Cable’s attack, attempts to shield Russell, who does elude Cable’s grasp. The rest of the film involves Cable’s pursuit of the Russell and Deadpool’s attempts to save the kid and ensure his future safety.

Along the way Deadpool provides a nonstop commentary that, like the first film, includes meta-comments about the movie itself (“That’s just lazy writing” he’ll step out of the frame to complain), remarks that place this film in the context of others, past and present (he calls Cable “Thanos” at one point, alluding to Brolin’s role in Avengers; at another point he refers to Russell as “John Connor,” alluding to Cable’s Terminator-like quest; at still another he makes fun of Marvel’s chief competitor in the superhero-film genre when he comments to Cable “You’re so dark. Are you sure you aren’t from the DC Universe?”). This constant undercutting of the film’s very text, like other post-modern literary efforts, calls into question the meaning of meaning itself. But there is another level on which Deadpool 2delivers with sincerity some of the same sentimental, idealistic themes that it seems repeatedly to undercut: It really does seem better to reform Russell than to kill him. It really does seem that Wade’s love for Vanessa works to make him a better human being. It really looks as if acceptance of others’ differences is healthier than imposing a bigoted morality on everyone. In the end, one might be forced to see Deadpool’s sardonic humor as a kind of laughing in the dark, a way of shielding the soul from the agony of lost love and the grim reality of death? Or is that just lazy writing?

I think you really ought to see Deadpool 2, especially if you found the original Deadpoolto be interesting. Reynolds and Brolin are highly entertaining, and Zazie Beetz (from TVs Atlanta) as a Deadpoolally named “Domino,” whose superpower is being lucky, is a riot from the moment she appears onscreen. I’m pretty sure she’ll be a regular in all the coming sequels. Three Tennysons for this one.