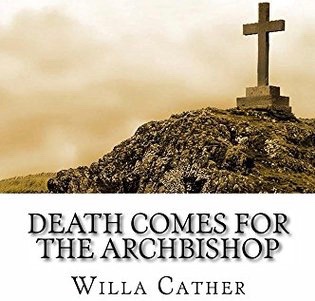 Death Comes for the Archbishop

If you’re a fan of Willa Cather, you most likely were introduced to her through her early novels that invoke pioneer life on the great plains of Nebraska where she grew up: O Pioneers (1913), The Song of the Lark (1915), and My Antonia (1918). Even her Pulitzer-Prize winning 1922 novel, One of Ours, is about a Nebraska farm boy who finally finds meaning in the war in France. So venturing into the book that is often considered her masterpiece, her 1927 novel Death Comes for the Archbishop, may seem at first foreign territory: Here is a highly episodic book that tells the life (not just the death) of a French Catholic missionary in America’s newly acquired New Mexico territory beginning in the 1850s.

An unexpected book from a Baptist-raised Nebraska prairie girl, this novel, told in Cather’s realistic, journalist-trained style, is also unusual for its time: It was published the same year as Virginia Woolf’s stream of consciousness classic To the Lighthouse and Sinclair Lewis’s scathing social satire Elmer Gantry, the year before D.H Lawrence’s scandalous Lady Chatterley’s Lover and the year after Hemingway’s tale of the post-war waste land of the dissolute and damaged, The Sun Also Rises. In terms of style and subject matter, Cather’s hagiographic historical novel seems from this perspective to have been out of step with her time.

Cather’s novel begins in the old world, where in a prologue, a French bishop working in America lobbies three cardinals in Rome to appoint his fellow countryman, the priest Jean-Marie Latour, to the newly created diocese of New Mexico, ceded to the United States when the Treaty of Guadalupe Hidalgo ended the Mexican-American War in 1848. The political realities necessarily demanded the redrawing of diocesan borders, and the French bishop is eager to have his own nominee appointed over the Spanish candidate proposed by the Bishop of Durango who held the see when it was in Mexican hands. And thus Latour is appointed.

Latour and his vicar and long-time friend Joseph Vaillant are Cather’s fictional names for Jean-Baptiste Lamy, the historical first bishop (and later archbishop) of the New Mexico territory, and his fellow Frenchman Joseph Projectus Machebeuf, who became the first Roman Catholic bishop of Denver. While the book follows the careers of the two priests fairly closely, it is somewhat fictionalized and, since she is not writing a strict biography, Cather chose to fictionalize the names as well. But the novel does follow the facts of their missionary work among the Native- and new Mexican-Americans in the southwest. Thus Lamy becomes “Latour,” i.e. “the tower”—implying that he stands as a tower of strength for the faith, while also perhaps suggesting something about his intellectual reserve, his “ivy tower” personality; while Machebeuf becomes “Vaillant,” or “the valiant,” suggesting the energetic courage with which he attacks all of his missionary assignments.

The narrative first follows Latour and Vaillant’s arduous journey from their previous mission in Sandusky, Ohio, where they were evangelizing among the Indians of the Great Lakes, to their new position in Santa Fe, at a time when the railroad reached only as far west as Cincinnati. They must journey by riverboat to New Orleans, are subsequently shipwrecked and lose most of their provisions at Galveston, and then travel west a thousand miles over land to Santa Fe, a journey that takes an entire year. And having reached his destination, Latour finds that the priests have been told by the Bishop in Durango not to submit to his authority. So he must make another thousand mile trip from Santa Fe to Durango to persuade the bishop there to recognize his credentials.

Even after these hardships, Latour still has an uphill battle to face in reforming or disciplining some of the established clergy in the territory. Father Gallegos, priest of Albuquerque, is a glutton enamored of the pleasures of life, whom Latour must ultimately remove from office and replace with his own vicar Vaillant. Father Martinez, the priest in Taos, believes that the rules of the old world must be revised for priests living in the new, and denies the necessity for celibacy, having fathered a number of children of his own. At the same time Martinez seizes a good deal of property for his own use from executed rebels. He is one whom Latour must ultimately excommunicate. Finally, there is the miserly Father Lucerno, priest of Arroyo, who also chafes at Latour’s authority but who repents on his deathbed and is given absolution by Vaillant.

Eventually the diocese is under control, and Latour is able to get enough monetary backing to build his dream: the Romanesque style Basilica Cathedral of St. Francis of Assisi in Santa Fe (before which a statue in honor of the real-life Archbishop Lamy stands today). But he also loses the companionship of his close friend Vaillant, whom he sends to Colorado to minister to the miners during the Pike’s Peak gold rush and who becomes the Bishop of Denver.

A number of striking and memorable scenes occur in this episodic narrative, including the story of how Latour and Vaillant narrowly escape being murdered by mass-killer Buck Scales and, in digressions, stories that they are told by others, such as the vision of Our Lady of Guadalupe, or the devastating story of the Long Walk of the Navajo when those people are forcibly removed from their native lands.

In the end this novel comes to no real climax, nor does it have a conventional plot or structural unity other than the stringing together of episodes that make up the biography of the novel’s protagonist. What, then, makes it worth reading, or indeed, what about it gives it a claim to be on these “Top 100” lists?

I would say there are three things: First, as is often the case with Cather, this story of American westward expansion is in part the story of human beings adapting themselves to their new natural environment, hence her books open up wide vistas of landscape to our imagination as we, too, adapt to the country along with the characters. Nowhere is this skill more on display than in the passage where the bishop, led by his young Indian guide, rides off to visit his Pueblo parishioners at Isleta, Laguna, and Ácoma for the first time: He sees wild pumpkin that appears “less like a plant than like a great colony of gray-green lizards, moving and suddenly arrested by fear.” He sees 700-foot mesas that look to him like “vast cathedrals” or the ruins of a great city. Moving among the huge rocks Latour sees each is “duplicated by a cloud mesa, like a reflection, which lay motionless above it or moved slowly up from behind it.”

More significantly, Cather presents Bishop Latour’s relations with the Indian people of his diocese—the Hopi, Navajo, and Pueblo Indians—as sympathetic and respectful. In addition to Latour’s scathing rebuke of the treatment of the Navajos on their “Long Walk,” which he calls an atrocity comparable to “black slavery” and his friend Kit Carson’s role in it “misguided,” Latour also displays a reverent view of Native American religion: When he says Mass at the Ácoma Pueblo, he feels an ancient spirituality there that he can scarcely touch:

“He felt as if he were celebrating Mass at the bottom of the sea, for antediluvian creatures; for types of life so old, so hardened, so shut within their shells, that the sacrifice on Calvary could hardly reach back so far. …When he blessed them and sent them away, it was with a sense of inadequacy and spiritual defeat.”

Cather’s expression of these kinds of attitudes in 1927, in a novel intended for her white American readers, was nothing short of groundbreaking, though it seems hardly to have been commented on at the time.

Finally, Cather herself would have probably seen the value of her story as its quiet depiction of an unostentatiously heroic life, of a man who accomplished great things through a long and persistent labor. It’s hardly the “grace under pressure” of her contemporary Hemingway’s fiction, but it is an ultimately successful spiritual heroism, as suggested in this passage late in the novel:

“But as he entered his study, he seemed to come back to reality, to the sense of a Presence awaiting him. The curtain of the arched doorway had scarcely fallen behind him when that feeling of personal loneliness was gone, and sense of loss was replaced by a sense of restoration. He sat down before his desk, deep in reflection. It was just this solitariness of love in which a priest’s life could be like his Master’s. It was not a solitude of atrophy, or negation, but of perpetual flowering.”

I’ll give this one three Tennysons.

The Wolf of Snow Hollow
Scroll to top