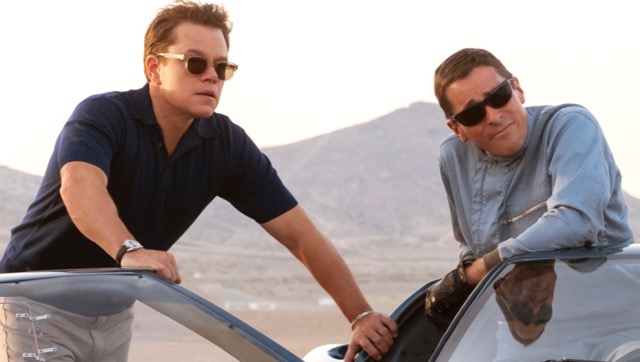 The Ford GT40 was the first car designed and built in the United States to win the storied 24 hours of Le Mans classic, and it ended up winning that race no fewer than four straight years in the late 1960s. James Mangold, director of such critically-acclaimed films as Walk the Line, 3:10 to Yuma, and Logan, here sets his hand to telling the story of the innovative American designer Carroll Shelby (Matt Damon) and the difficult but dauntless driver Ken Miles (3:10 to Yuma’s Christian Bale), who together produced the car that was finally able to end the apparently unstoppable Le Mans reign of legendary designer Enzo Ferrari in 1966.

If you think this sounds like a film aimed chiefly at racing fans, but less appealing to those who   find watching a bunch of cars turn to the left for 24 hours the rough equivalent of watching paint dry, think again. The Damon-Bale showcase seems destined to take its place alongside Paul Newman’s Winning, Steve McQueen’s Le Mans, and most notably James Garner’s Grand Prix as the best auto-racing films of all time. Ironically, or perhaps deliberately, Mangold’s film is set the same year—1966—that Grand Prix came out, netting three Academy Awards and earning John Frankenheimer a Best Director nomination from the Directors Guild of America.

And Ford v. Ferrari feels like a throwback movie, one that might have been made in the late ’60s, on a par with Tarantino’s Once Upon a Time in Hollywood earlier this year. It has a bromantic, Newman/Redford vibe with Damon and Bale, it has a technological challenge reminiscent of The Right Stuff—particularly in its sense of the individual vision striving not to be eclipsed by the grand bureaucracy. And it has a welcome nonreliance on comic book characters and CGI effects. Oh sure, the race scenes almost certainly use some such effects, but they aren’t overpowering, and the chief story is about adult men without super powers, who take on a difficult project and succeed through hard work, knowledge and individual experience. Screenwriters Jez Butterworth and brother John-Henry Butterworth (Edge of Tomorrow) and Jason Keller (Mirror, Mirror) give us a film so old-fashioned that people actually talk to each other with dialogue and stuff. Jez began as a playwright, so that might explain it. Also, the film is actually realistic in the classic sense. How often do you see that nowadays? And by the way, get off my lawn.

I did say it was a film about adult men specifically. You have to search pretty hard to find an actual woman in the cast. And then you’ll only find one. It’s Caitriona Balfe (of TV’s Outlander), who plays Mollie Miles, Ken’s wife. She doesn’t have a lot to do, but she makes the most of what she has. Frustrated at the way Miles seems to self-destruct, blowing his chances at making a good living in racing by his irascible personality, she does manage not to fall into the poor-wife-wanting-to-keep-her-husband-from-doing-this-dangerous-thing mold so ably acted, for example, by Claire Foy in last year’s First Man. Mollie is a formidable spouse with significant knowledge of her husband’s profession, and a healthily ironic view of his cranky fits of testosterone, bringing out a lawn chair in order to watch in comfort his boyish wrestling match with Shelby.

But other that it’s a man’s world. The story begins when Henry Ford II (Tracy Letts of The Post), frustrated at falling behind Chevy in sales, shuts down his factory and tells his workers not to come back until they can bring him an idea. It’s Lee Iacocca (Jon Bernthal of TV’s The Walking Dead) who brings Ford the idea of getting into racing. People should see driving a Ford as something cool: “James Bond,” he tells Ford and his executives, “does not drive a Ford.”

The first thought is to buy the financially troubled Ferarri. But when Iacocca and his team arrive in Italy to make their offer to Enzo Ferarri, played with suitable imperiousness and disdain by veteran Italian actor Remo Girone, spies in Ferarri’s business report the offer to Fiat, who step in to better Ford’s offer and buy Ferarri’s company from under them. And through Iacocca, Ferarri sends a smug message to Ford: He makes ugly cars in ugly factories, and as for the CEO himself? “Tell him he’s not Henry Ford. He’s Henry Ford the second.”

And oh, now it’s on. Ford decides to put all his resources into building a race car that can end Ferarri’s domination of the sport at Le Mans, as much out of spite at the insult as for any solid business reasons that Iacocca might have had. And to build this machine—in just a couple of months—Ford seeks out independent designer Carroll Shelby (Damon), a retired race driver who had previously won the 1959 24 Hours of Le Mans, but had retired shortly thereafter when a heart condition sidelined him from racing. Shelby takes on the challenge and insists on hiring the brilliant but difficult Ken Miles (Bale) as his lead driver. Miles, a cantankerous Brit who’s managed to alienate everybody who could do him any good (with the exception of the mellow Shelby), wastes no time in getting on the wrong side of the somewhat slimy Ford senior executive Leo Beebe (Josh Lucas of TV’s The Mysteries of Laura), whom Ford, of course, had put in charge of the project. As a result, although Miles’ fanatical work on improving the car has been instrumental in its development, Beebe insists that Miles cannot represent the corporate image Ford desires, and therefore cannot be part of the driver team at Le Mans. Naturally, Ford loses big in its Le Mans debut.

Ford himself, of course, is ready to scrap the entire program, until Shelby convinces him that “you can’t win a race by committee,” and talks Ford into giving him carte blanche in continuing the program. Ford’s promise lasts about as long as his nose, and Beebe is back again way too soon. The screenwriters have eschewed the black/white, either/or implications suggested by the film’s title and given us instead a much more complex, thought-provoking situation that suggests an actual respect for their audience. How refreshing is that?  What ultimately develops is not an all-out competition between Ford and Ferarri, between American know-how backed by the unlimited resources of American capitalism and the old-world craftsmanship of the nearly bankrupt Ferarri. What it amounts to instead is a modern day parable of individual ingenuity and creativity resisting the smothering power of capitalist bureaucracy that seeks to assimilate and incorporate. Shelby and Miles, in their way, are a pair of Ferarris resisting the corporate greed of Ford.

Overall, the racing scenes are heart-pounding and seem authentic enough to satisfy even the staunchest racing enthusiast, for which Mangold’s cinematographer Phedon Papamichael (Nebraska and Walk the Line) must be given a good deal of credit. Damon is likable as Shelby,  giving such a laid-back performance in his cowboy hat and smooth charm that it looks effortless, a quality much to be admired. Bale, on the other hand, is so frenetic as Miles that he seems over the top at times, with his exaggerated accent and facial expressions reminiscent for all he world of Michael Palin in a Monty Python sketch. The contrast in acting styles was no doubt intended to stress the significant contrast between the two men, and it works most of the time. And Miles’ few quiet scenes with his young son Peter (a refreshingly non-cloying Noah Jupe of A Quiet Place) serve to humanize him. The rest of the ensemble cast (especially Letts, Balfe, Lucas, Bernthal and Girone) all deserve special mention.

This may not be the best picture of the year, but in many ways it’s one of the most exciting. Three Tennysons and half a Shakespeare for this one.