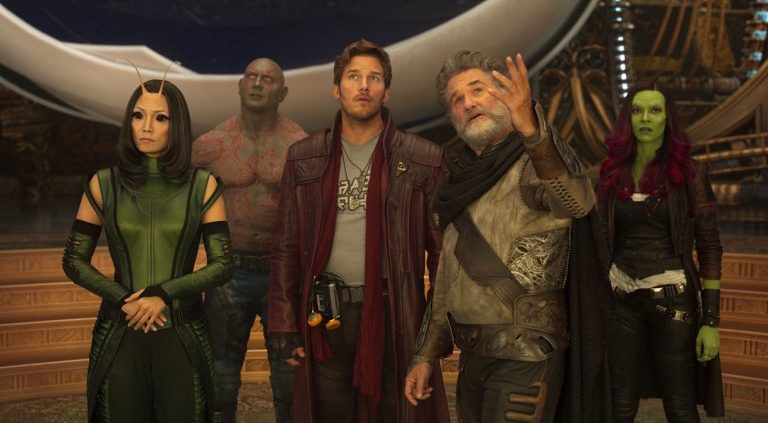 Guardians of the Galaxy, Vol. 2

The original Guardians of the Galaxy grossed more than three-quarters of a billion dollars worldwide in 2014, making this sequel inevitable, and clearly volume three is in the works, to judge by the closing credits of the current film. Volume two, which made nearly $150 million its opening weekend, has not disappointed its backers, and promises to make an even bigger fortune in the weeks to come. There is enough of what made the original film successful carrying over into part two to ensure the continued success of Star Lord and his crew.

Chris Pratt is back in his role as Peter Quill (aka “Star Lord”), and he is joined by his kind-of sort-of love interest, the green-skinned alien Gamora (Zoe Saldana), the terribly literal strongman Drax (Dave Bautista), along with the engineered raccoon-like scaliwag Rocket (voiced frenetically by Bradley Cooper). You may remember, too, that the original Guardians included a giant talking tree named Groot (voiced by Vin Diesel), who sacrificed himself to save the others at the end of that film. Being a tree, Groot provided a cutting that the other Guardians kept, which has now grown into a new Baby Groot—still voiced by Diesel, though, as a baby, the infant Groot has a very limited vocabulary, so Diesel doesn’t get many lines, beyond a baby-talk “I am Groot” kind of thing. But Baby Groot pretty much walks away with this film, he’s so incredibly cute. Preparing us, we can be sure, for a massive marketing campaign of Baby Groot action figures in the very near future.

Another popular aspect of the first film was the mixed tape that Quill’s mother left him at her death in 1988, creating a best-selling soundtrack of ’60s and ’70s songs that were the soundtrack of Quill’s life through the adventures of Volume One. Volume Two begins with two set pieces: The first is an idyllic love scene set in 1980, played out to the tune of Looking Glass’s hit song Brandy, involving a liaison between Quill’s mother and a CGI-youthened Kurt Russell (as a visiting humanoid space lover) that recalls the popular 1984 film Starman, for which Jeff Bridges received an Oscar nomination. How awesome would it have been to have gotten Bridges to play this role in Guardians? But I digress. Russell shows up later as Quill’s fugitive father, but more of that anon.

The second set piece incorporating the mixed-tape soundtrack is a battle that the Guardians fight against a giant slug-like monster while they are trying to protect essential batteries for a gold-skinned race of obnoxious little snobs called “the Sovereign” that takes place in the background while Baby Groot is grooving out to the vibes of ELO’s “Mr. Blue Sky.” And, in the meantime, the opening credits roll.

If you see the film in 3D, which I am unconvinced is ever worth the exorbitant surcharge laid on it by the profit-obsessed Hollywood film industry, you will actually be entertained by the way things swing out at you and Baby Groot during this battle. And that is the third aspect of Film One that carries over into this one: top-of-the-line action sequences and CGI effects that dazzle the viewer, making this film a true feast for the eyes. If, and that’s a big if, it is ever advisable to pay for the 3D version, this is the time. Trust me, I wouldn’t tell you if it wasn’t true.

But what really made the original Guardians of the Galaxy such a huge popular hit, more than any of these qualities, was the irreverent attitude and tongue-in-cheek cynicism of the characters, especially Quill, and at base the ironic view of the whole film toward the conventional “it takes a bunch of superheroes to save the galaxy” theme inherent in these comic-book movies: A healthy awareness of the absurdity of the basic notion behind these kinds of fantasies—the feeling that, if you can’t make a joke about it, it doesn’t belong in the film—is a healthy perspective to keep. Indeed, that’s what originally differentiated Marvel from DC comics in the first place. Those straight-as-an-arrow, super-serious DC heroes like Superman and Batman were really expected to be taken seriously in their quest to save the world. But Spiderman? Is he strong? Listen Bud: he’s got radioactive blood. Marvel heroes had more psychological complexity, and were wise enough to laugh at themselves. That essentially has held true of the films coming from these two traditions. Iron Man, for instance hits that irreverent note pretty strongly. And the first Guardians hit it out of the park.

Not so much this one. Somewhere around Act II, Kurt Russell shows up riding an egg-shaped craft and saving the Guardians from the hot pursuit of the Sovereign (from whom Rocket has cavalierly stolen a precious battery), and he no sooner meets Quill than he announces that his name is Ego (seriously—do you think that might signify anything?) and that—hold onto your hats—he is Quill’s father.

The revelation underscores the theme of the whole movie, affecting each of the characters in his or her own way. Quill must deal with suddenly having a father when he has grown up without one, and come to terms with his father’s abandonment of his mother. In the meantime, Gamora is at odds with her criminal cyborg sister Nebula (Karen Gillan), whom she has arrested and plans to turn in and with whom she is engaged in a kind of “Dad liked you best!” sibling feud. Even Rocket begins to examine his emotional traumas as a fatherless youth, and Yondu (The Walking Dead’s Michael Rooker), the blue-skinned disgraced Ravager who kidnaped Quill as a child, emerges as a kind of long-lost father figure for our hero. This is balanced against the new “family” that the Guardians have forged themselves into, a relationship underscored by the presence of Baby Groot and the need for all the Guardians to watch over him as the new baby in their family. The chief question of the film becomes whether Quill will be forced to make a choice between his newly revealed father and the group of misfits who have become his surrogate family.

Ego himself raises even more serious questions—questions of a theological nature, and questions that may suggest a spoiler alert on the way, so if you want, you might skip this paragraph until you’ve actually seen the movie. Ego, you see, is not simply a humanoid alien being. Essentially Ego is a god, and his motivations are the sort of motivations that human theologians attribute to the creator God as they try to understand him. Even the father’s name—Ego—recalls Yahweh’s declaration to Moses that his name is “I am.” This is all fine for an omnipotent being, but as it turns out Ego is not omnipotent, and the “Ego” name may suggest a darker side, a kind of sociopathic Narcissist. But I don’t want to give too much away.

If all this seems a bit heavy for this little band of sardonic misfits to carry, that’s probably the one real drawback of this movie. It seems out of character for the wisecracking Quill to be so bogged down with existential angst, and when it affects Rocket, well, that might just be going too far. Fans of the original Guardians are still going to find enough here to delight them. And Russell, Rooker and Pom Klementeiff as Ego’s timid little servant girl Mantis give winning performances to complement the lead ensemble. Some may find that the serious turn takes away from the irreverent cynicism that made the first film such a treat, but I’m sure they’ll all be back for Volume Three. It will be interesting to see whether that installment continues this new introspective trend or returns to the cheeky tone of the first Guardians. But for now, I’ll give this one three Tennysons. It’s definitely worth a look.

Richard Crashaw’s “On Our Crucified Lord, Naked and Bloody̶...
Scroll to top