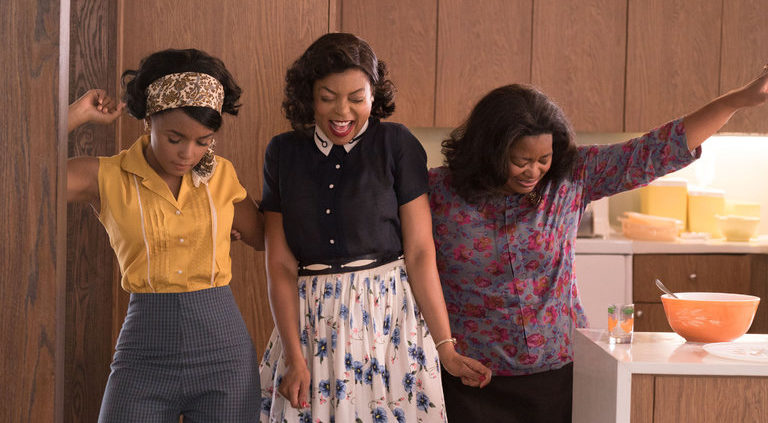 1961 was that moment in history when the federal government was drawn reluctantly into the Civil Rights movement and, under president Kennedy, began to challenge state laws, particularly in the South, that institutionalized racism in direct violation of the provisions of the 14th amendment. There are occasional allusions to this wider movement in Hidden Figures—a brief mention of Martin Luther King, references to violence against freedom riders and the like, and of course pictures of the president in offices throughout the film. That is all background, but it is important background, because NASA, an arm of the federal government, is the setting for this film, and Kennedy, who two years later would declare that “This nation was founded by men of many nations and backgrounds. It was founded on the principle that all men are created equal, and that the rights of every man are diminished when the rights of one man are threatened,” is the same president who vowed, after the Soviet Union put the first man in space in May of 1961, “I believe that this nation should commit itself to achieving the goal, before this decade is out, of landing a man on the moon and returning him safely to the earth.”

From this world comes the story of Katherine Goble Johnson (Taraji P. Henson, known mainly from TV’s Person of Interest and Empire), Mary Jackson (R & B singer Janelle Monae, who also appears in this season’s Moonlight), and Dorothy Vaughan (Octavia Butler, Academy Award winner for The Help), three NASA employees working at the Langley Research Center in Virginia, who overcome institutionalized racism (and sexism) both to achieve personal career advancement and to contribute to the American manned space program.

All begin the story working in a pool of human “computers”—about twenty African-American women housed in a basement on the “West Campus,” far from the hub of activity. The main task of these women is doing the math—mainly double checking human calculations to verify their accuracy. Dorothy (Spencer) is the unofficial supervisor of these women, who runs into a roadblock when she asks to be promoted to supervisor in order to get paid for the job she is already doing. She also sees the writing on the wall when NASA begins installing its first room-size mainframe computer. Suspecting that she and the women in her group are about to become obsolete, she “borrows” a book on FORTRAN from a “whites only” library and prepares herself and her colleagues to keep pace with the inevitable loss of their current jobs. Jackson (Monae) is promoted out of the pool to the engineering corps, where, showing surprising aptitude for working on the Mercury capsule design, she is encouraged by her immediate supervisor to get an advanced degree in engineering—a step she cannot take without first completing certain required courses offered in the evenings at a local “whites only” high school, a rule she challenges in a Virginia court before a judge who insists that his state’s laws trump any federal mandates.

But these two stories are really secondary to the chief plot of the film, which focuses on Johnson (Henson). Katherine, whom we are shown in the beginning of the film as a math prodigy at an early age, is promoted to the all-white and virtually all-male “Space Task Group” at Langley, where she uses her gift for analytic geometry to check the calculations and rocket trajectories worked out by the scientists in the room. Led by Al Harrison (Kevin Costner), these scientists (as depicted early in the film) are in a heated race to answer the Soviets, who resoundingly announce their advantage in the space race by putting Yuri Gagarin into orbit in April of 1961. Johnson meets resentment and quiet contempt in her position, except from Harrison, who is too focused on the problem of putting a man in orbit to notice the difficulties Johnson is having—in particular, her need to run half a mile to the West Campus to find a “colored bathroom” whenever the need arises.

The story of these women’s struggles, told in the best-selling nonfiction book by Margot Lee Shetterly, was adopted for the screen by director Theodore Melfi (Saint Vincent) and collaborator Allison Schroeder. They have made it into a pretty straightforward feel-good movie about the triumph of hard work and natural ability over unfair barriers that have been set up to keep them down. From the beginning there is little doubt that these women will triumph, and there is little complexity to the story or the characters, particularly the white ones.

The most important exception to this is Costner, who gives one of his more memorable performances as Harrison. In a climactic scene, Harrison berates Johnson for being absent from her desk when he wants her, grousing “What do you do for 40 minutes every day?” In a somewhat out-of-character breakdown, the very shy but frustrated Johnson lets him have it about the “colored” restroom problem, after which he takes a crowbar to the “colored ladies” sign in the West Campus and declares that all bathrooms are now integrated.

Another sympathetic white face is supplied by Olek Krupa as Karl Zielenski, who encourages Jackson—even puts the idea in her head—to get her engineering degree. But Krupa is only in one brief scene. Significantly, another figure who encourages Johnson to contribute to the conversation, and who will not agree to embark on his historic orbital mission without being assured that she has checked the math, is John Glenn himself (played by Glen Powell of Everybody Wants Some).

All of the other whites in the film, though, are essentially unsympathetic, as represented by Vivian Mitchell (Kirsten Dunst), Vaughan’s supervisor, who doesn’t actively injure Dorothy or her chances for advancement, but passively accepts the racist status quo as “just the way things are” and, in allowing it to continue unchallenged, makes herself part of the problem. In a rare moment of empathy, or at least self-defense, she tells Dorothy that she is just following established procedures, that she is not racist herself, to which Dorothy responds with scathing candor, “Yes, I’m sure you think so.”

Jim Parsons (of TV’s Big Bang Theory) has a somewhat more complex reaction: As Harrison’s head engineer appointed Katherine’s immediate boss, he resents having his work checked by anyone, let alone a woman who to top it off is also black. To him she is a threat and a rival, so that his animosity is more personal than passive or institutional. I expected a road-to-Damascus scene showing a reversal and change of heart, but didn’t get one—we are led to imagine that Parson’s character came out of his own resentments gradually over time.

But the film doesn’t belong to him or to Dunst or even to Costner. It is the three women who own this film. Each of them projects a likeable and sympathetic aura, a distinct personality and a sympathetic plight, which the audience pulls for them to overcome. Their work is excellent: Spenser is always good, alternating here between feisty bluntness and calculating coolness; Monáe has several scene-stealing moments as the most confident and most ambitious of the three; and Henson shines as the most gifted but most introverted of the three, who ultimately finds ways of becoming more assertive as her story develops.

Perhaps one flaw in the movie is that we are seldom exposed to any anger or resentment felt by these characters, or any active evil on the part of their oppressors. It’s just a feel-good story about women overcoming adversity through their own innate talents. It might have been less sugar-coated: the struggle for basic civil rights on the national level might have been allowed to encroach a bit more into the story. Even the upbeat score by Hans Zimmer and Benjamin Wallfisch, with songs by Pharrell Williams, contributes to the lighthearted atmosphere of the film, with Williams’ song “Runnin’” playing humorously as Katherine makes her daily dash across campus to the “colored” restroom. It all combines to make us feel that victory is inevitable and that obstacles will be brushed away like gossamer. At the same time, events have played out to make this film far more topical than its distributors imagined upon its release. The recent death of John Glenn, last of the Mercury astronauts, and the resumption of distrust and suspicion of the Russians, coupled with timely new concerns about human rights in what is apparently a new “post-civil” society, are reminders that these things must be taken very seriously.

Geoffrey Chaucer’s “Wife of Bath” from the General Prolog...
Scroll to top