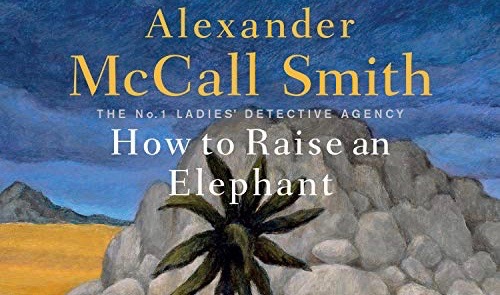 How to Raise an Elephant

This latest installment in Smith’s enormously popular No. 1 Ladies’ Detective Agency series—the 21st—is newly released (as of November 24), and if you are a fan of the series, you will find it a very comfortable read. Within a few paragraphs you are back in Botswana with Mma Ramotswe and her friends, where you can have some bush tea and a slice of Mma Potokwani’s fruit cake and discuss Charlie’s latest  misadventure. But if you aren’t already familiar with the series, you might want to save this book until you have read several of the previous volumes in the series. Otherwise, this will seem a strange “detective” book to you, since there are no clients in it and no real mysteries to be solved—just a few personal questions and problems that need a solution. And the very leisurely pace will puzzle you, until you realize that the meat of the book is actually in the discussions about life taking place between the characters and not in the action of solving crimes.

The questions/problems/mysteries to be solved in this installment of the series are, first, what’s going on with the couple who move in next to Mma Ramotswe and her husband, Mr. J.L.B. Matekoni, who seem to be at war with one another? Second, what is Mma Ramotswe to make of the request from her distant cousin, Blessing Mompati, who comes to the agency to ask for money to pay for a hip replacement for another relative, Tefo Kgomo? Tefo, a native of South Africa who has lived in Botswana for many years, cannot get the operation paid for by the Bostwana health care system because he was once convicted of stealing a goat. And finally, there is the issue of the elephant.

It seems that Charlie—part-time mechanic in Mr. J.L.B. Matekoni’s garage and part time detective in Mma Ramotswe’s agency—has agreed to take care of an orphaned baby elephant in his uncle’s back yard, though how he can possibly care for the elephant long term, or stop it from causing damage or harm to others as it grows larger, is beyond the young man. This is a problem, especially since the friend who stuck Charlie with the elephant has been talking to butchers about how much they might pay for elephant meat.

The most trying of these difficulties for Mma Ramotsswe personally is the request for money from Blessing, a request that both Mr. J.L.B. Matekoni and Mma Makutsi believe to be some kind of scam, a belief that for Mma Makutsi becomes a certainty when she begins to look into Tefo’s criminal conviction. As for her neighbors’ hostile relationship, Mma Ramotswe finds only a kind of intractable resentment for which she can see no solution.

The orphan elephant, however, may be a problem for which a solution might be found, if Mma Ramotswe can consult the local expert on orphans (though mainly of the human variety), Mma Potokwani. If Charlie, Mr. J.L.B. Matekoni, and the young mechanic Fanwell can get the elephant to Mma Potokwani’s orphan farm secretly at night in Mma Ramotswe’s little white van, all may turn out all right. But can the old van—almost as much a character in the series as the rest—get the job done?

If you know this series, you won’t be surprised that by the end of the book, lessons have been learned about living charitably and with honor, about not prejudging people based on details you may not understand, and about living peacefully with our fellow beings, including individuals of the pachyderm persuasion. Mma Ramotswe’s neighbors demonstrate the noxious atmosphere that an unforgiving nature can create, and Mma Makutsi has a revelation that undercuts her tendency to judge others harshly.

But perhaps most memorably, we as readers learn something about elephants. It is difficult to imagine how anyone, after reading the later chapters of this novel, can ever think of elephants as dumb brutes who might be destroyed for their valuable ivory, especially after reading of how orphaned elephants who are raised by humans and let back into the wild will return to their benefactors to show off to them their own new calves.

The story is told at a leisurely pace, perhaps even more leisurely than usual, and as in the earlier novels, one is left with the impression that the little, everyday things in life are the things that life is truly made of. You may even learn something from the conversations between the characters—such as whether or not men are worth having around. That is why I say that if you haven’t read other books in this series, this is probably not the one you should start with. Much of the enjoyment here depends on your familiarity with these characters, and in term of plot not as much happens here as in some of the other books. It’s still worth reading if you’re a fan of Botswana’s No. 1 Ladies Detective Agency. And McCall-Smith’s evocative prose always brings Bortswana’s capital city of Gabarone alive for me—which is a bonus during a pandemic when we can’t physically travel anywhere  So I’ll give How to Raise an Elephant three Tennysons.