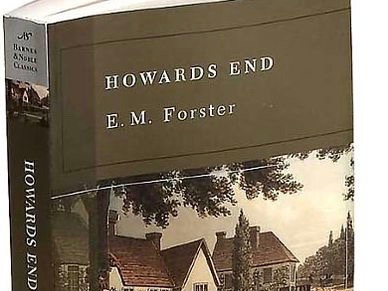 When E.M. Forster was four years old, he moved with his mother into a country house north of London called “Rooksnest.” He later wrote that from the time he moved in, “I took it to my heart and hoped…that I would live and die there.” Forster only lived in the house for ten years, but it remained an ideal to him of English country life and morality—as opposed to the encroaching values of industrialization—and it was Rooksnest that formed the basis in his mind of the house known as Howard’s End, which is the central symbol of Forster’s breakthrough novel of 1910, the book that made him famous.

Many readers consider Howard’s End to be Forster’s masterpiece, though there are always some who prefer A Room with a View and others who, like me, are proponents of his more epic Passage to India. Nevertheless, it is Howard’s End that was ranked number 38 on Modern Library’s list of the “100 greatest English-language novels of the 20th century.” Does it deserve this lofty rating? Does the novel hold up today, after more than a century?

Forster was dealing with important social questions of his time, in particular the question of class differences and the question of which of these classes would ultimately define the England of the twentieth century. Three distinct classes are represented in the book by the three individual families involved in the action of the novel: the intellectually and culturally elite Schlegel family who maintain the older virtues of the upper classes; the materialist capitalist Wilcox family, who maintain the pragmatic virtues of the conventional middle class; and the Bast family with working-class origins though possessed of a soul striving for something finer, but ground down by brutal economic forces.

Forster himself had spent a good deal of his time among the intelligentsia, the Schlegel-like writers and artists who would become the Bloomsbury group and with whom Forster had much in common, so his initial attitudes must have been in sympathy with them, but he was, by the time he wrote Howard’s End, rethinking those sympathies, realizing that without the capital produced by the middle class the intellectual class would hardly be able to maintain its position and, further, well-meaning sympathy toward the working classes would not bring about any real relief of their condition without true societal change. And so we have the character of Tibby, the Schlegel brother in the book, who essentially does nothing at all that benefits anyone, and is happy simply living on his inherited fortune and studying music for his own enjoyment; and  Helen, the big-hearted sister who takes on the improvement of Leonard Bast as a kind of private do-gooder project and ultimately destroys him. Thus Forster seems to suggest that the learning of the intelligentsia is pointless if it is simply for the sake of learning itself, and the beneficence of this class is useless unless it has a wider and well-conceived strategy to it.

Thus Margaret, the Schlegel sister who is the novel’s true protagonist, is a kind of Everyman (Everywoman?) figure in Forster’s Morality play, torn between the extremes of her sister Helen, idealistic, impulsive and emotional, and the man she ultimately marries, Henry Wilcox, the capable, responsible, and practical businessman who owns Howard’s End. Forster structures the novel in a way that compels Margaret to act as a buffer and a bridge to reconcile the extremes of Henry and Helen—a merger that seems to be Forster’s recommended policy in the novel. Margaret is certainly far more practical than her sister. “More and more,” she says at one point, “do I refuse to draw my income and sneer at those who guarantee it. . . . Hurray for riches!” In her marriage to Henry, Margaret (and Forster with her) sees a merging of the salient characteristics of the classes they represent. “Only connect,” she says. “Only connect! That was the whole of her sermon. Only connect the prose and the passion, and both will be exalted, and human love will be seen at its height. Live in fragments no longer.”

Surely there are similar class distinctions in the contemporary world. It’s a matter of opinion, I suppose, whether contemporary readers will be satisfied by Forster’s fictional proposal. But it is certain that no contemporary readers will find the book interesting chiefly as a comment on social conditions. We are certain to look at Margaret, Henry, Helen and Leonard as individuals, not representatives of class, and we are going to react to them accordingly.

And the fact of the matter is this, folks. Whatever there is in Henry Wilcox that may have been admirable to Margaret Schlegel, or to readers in 1910, is inconceivable to readers in 2020. Let’s face it, Henry is a bigoted, misogynistic, self-important philistine. He’s a boor with no redeeming features except for the dubious honor of being not quite as reprehensible as his son Charles, being less quick to see the worst in other people. It may be that tiny, tiny hole in the massive dyke of his inflexibility that Margaret expects her indiscernible trickle of compassion to burst through. But it seems a long, long shot.

Henry is rich, and he has become rich through his business, the Imperial and West Africa Rubber Company—which, as is clear simply in its name, is a colonial enterprise that depends on Wilcox’s exploitation of the native peoples of places like Nigeria for his own profit. He has no use for social reform—if the poor deserved anything, they would have enough money to buy it. They were as little his responsibility as those African natives were. He sees no reason to treat his own servants with any common decency, though he demands that he himself be treated with deference. As for women, they are subject to hysterical fits and the idea of giving them the vote is preposterous. Of course, in much of this he is a man of his times, but that’s not much of an excuse. When his first wife, Ruth, who owns Howard’s End, writes out a (witnessed) codicil to her will on her deathbed, leaving the house to her new friend Margaret Schlegel, Henry destroys the paper, with the eager support of his family, declaring that it cannot be legally binding, and that there is no need to tell Margaret about it. Most egregiously, during his marriage to Ruth he had a mistress, Jacky, while he was in Cypress on business, and when he left there he abandoned her and left her to fend for herself as a “fallen woman.” She is now living with the working-class Leonard Bast, who, though he is not married to her, does feel he has a responsibility to her.

The novel’s greatest irony lies in this indiscretion of Henry’s. When Margaret is made aware of it before their marriage, he believes she has deliberately set a trap for him (one can only reason that, since this is something he would do, he expects it must be what someone else is capable of). But when Margaret forgives him, he eventually comes to view the affair as nothing to be concerned about—he is no more responsible for Jacky’s fall than he is for Leonard Bast’s unemployment, even though it was his own (mistaken) pontificating about Bast’s place of business being unstable that led to Bast’s resigning his position. He has no personal responsibility for anything that happens to anybody. Let them fend for themselves. Nor does he see the blatant hypocrisy of his later attitude toward Helen for her own sexual indiscretion.

I won’t go into any “spoilers” here in case you’re reading this before reading the book, but  suffice it to say that the biggest flaw in the novel is our difficulty, as readers, to suspend our disbelief enough to accept Margaret’s marriage to this guy, and her defense of him to Helen. It’s not enough to say simply that times have changed. There were people in 1910 who were more evolved than this—the Schlegels themselves are a case in point.

The only way I can make sense of this is to think of Chaucer’s “Clerk’s Tale”—the story of patient Griselda, a woman essentially married to a monster named Walter who torments her for twelve years before her patient virtue breaks him and turns him into a decent human being. Margaret is not as patient as Griselda, nor is Henry as abusive as Walter, and Henry’s change takes something outside their relationship to blossom, but maybe it’s more believable. Three Tennysons for this one.

From Matt Rasmussen’s “Elegy in X Parts”
Scroll to top