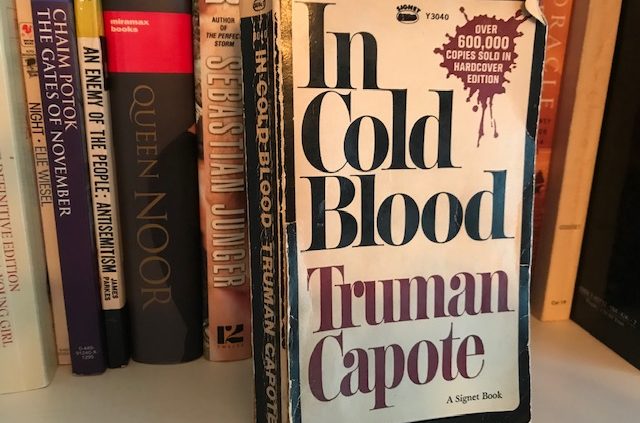 It’s now more than fifty-five years since Truman Capote’s In Cold Blood created a sensation seldom equaled in the history of American letters. The book made six million dollars in the mid- 1960s—the equivalent of, say, $48 million today. It’s hard to argue with that kind of success. But although the book was nominated for a Pulitzer Prize, it lost out to Bernard Malamud’s The Fixer, much to Capote’s chagrin. Still, the novel made Capote such a celebrity that he never finished another book for the 19-year social whirl that made up the remainder of his life.

What Capote did in In Cold Blood is spawn two major new genres: One of these is the genre of “true crime,” which has become wildly popular in the twenty-first century, not only in books but in television series, in podcasts, in media of all kinds. The other is what Capote called “the non-fiction novel,” as he labeled In Cold Blood. The genre, which depicts actual historical persons and events presented having imagined conversations and using the narrative techniques of fiction, had its moment in the late 1960s and ’70s with books like Norman Mailer’s Armies of the Night and The Executioner’s Song, and Alex Haley’s Roots.

Capote’s book explores the brutal and apparently motiveless killing of the Clutter family—father, mother, teenaged daughter and son—in the small rural town of Holcomb in western Kansas: Two ex-convicts walked into their unlocked farmhouse in the early-morning hours of November 15, 1959, expecting to find a safe with a good deal of cash. There was no safe, and the two thieves, Richard Hickock and Perry Smith, walked away with between forty and fifty dollars, a pair of binoculars, and a transistor radio—and left four corpses, all shot in the face at point-blank range by shotgun blasts because, well, they didn’t want to leave any witnesses.

Capote traveled to Kansas after reading about the murders in a newspaper, accompanied by his childhood friend Harper Lee—whose novel To Kill a Mockingbird would win the Pulitzer Prize during the process of their investigating the murders. It was Lee who helped Capote earn the trust of the Clutters’ friends and neighbors, and later the police investigating the case and ultimately even the murderers themselves. Capote spent six years researching the case, interviewing everyone involved and compiling some 8,000 pages of notes—even being present, at Smith’s request, at the perpetrators’ hanging—before publishing the complete book, first as a four-part serial in The New Yorker in 1965, then in book form in 1966. Then he spent a good deal of time promoting the book, foolishly making the unfortunate claim that “every word” of his novel was true.

Any reader thinking about that claim had to know before making significant headway into the book that such a claim was absurd. Capote dramatizes virtually every plot point of the story with detailed, often lengthy conversations between the killers in their haphazard road trip to Mexico and back subsequent to the murder, between members of the Clutter family and their friends, between law enforcement personnel and others. That’s unavoidable in a novelization of historical events. But Capote went further still, adding scenes that never happened at all but that helped establish the book’s mood or theme: Most notable of these is the concluding scene in which the lead investigator on the case, Alvin Dewey, is depicted visiting the Clutters’ graves, where he meets and has a conversation with Susan Kidwell, Nancy Clutter’s best friend—a scene Dewey says never happened. Similarly, Josephine Meier, the wife of the Finney county Undersheriff Wendle Meier who was charged with overseeing Smith’s incarceration, is depicted as forming a close and sympathetic relationship with the prisoner, yet Mrs. Meier denied that any such relationship existed, and said she seldom spoke with Smith and spent very little time with him.

But it seems to me that if these inaccuracies ruin the book for you, you’re grabbing at the wrong end of the stick. Sure, I suppose the majority of that mass of readers who bought the book on its initial publication did so because they were anticipating reading all the facts behind this famous brutal murder. But the book lives on because it is highly readable, remarkably engrossing. And that’s not because it’s a list of facts. It’s because it reads like a novel.

Capote uses a literary style. He is able to build suspense even though we already know who committed the murders, that they were tracked down by law enforcement, found guilty in a court of law, and executed. We know all of this and yet are carried along by the narrative specifically because of those dramatized scenes and imagined conversations. The real-life Josephine Meier never had those sympathetic moments with Perry Smith, but Josephine Meier the character in Capote’s novel does have them. Alvin Dewey never had that conversation with Susan Kidwell in the graveyard on the authentic Kansas plain, but the conversation between the character Dewey and the character Susan is important for the final effect of the novel. In Cold Blood is a work of literary art. There is no more need to believe in its unadulterated veracity than there is to believe in the absolute historical truth of a film that claims to be “based on a true story.” The book does what that film does: It takes a historical situation and explores it for its thematic significance in a work of art.

Capote first deals with the easy part of the story—he introduces us to each member of the Clutter family: Herb, the wealthy farmer who is active in his church, respected by his community, and kind to the men who work for him. Bonnie, the delicate wife. Nancy, the popular and talented teenaged daughter, and Kenyon, the equally popular and athletic teenaged son. We meet some of their neighbors and friends, including Nancy’s boyfriend, an initial suspect until he passes a lie detector test. But mostly we are struck by the terrible waste and incomprehensibility of their fate. Capote quotes one neighbor as saying “That family represented everything people hereabouts really value and respect, and that such a thing could happen to them—well, it’s like being told there is no God.”

You might say that the rest of the book is Capote’s attempt to respond to that statement. Why and how could such a thing happen to a family like this? He moves us to the point of view of Alvin Dewey, the chief investigator, who has never seen a crime like this, and vows to hunt down the killers, though he has little success until another convict, who had once been employed by Herb Clutter, admits to having discussed Clutter’s wealth with his cell mate—Richard Hickock. We move to Hickock and Smith’s life on the run, and are struck by their cavalier attitude about the murders—they seem to have no remorse at all and hardly think about it. They are mainly worried that they might get picked up for passing bad checks. Then comes the capture, the trial, the conviction, and ultimately the execution by hanging of the two murderers.

Along the way, Capote goes into some detail about the backgrounds and life events that created these two criminal minds and explores their psychology. He examines the trial itself and questions about its fairness, as well as court’s reliance on the anachronistic M’Naughten Rules (formulated in the 1840s) that make it virtually impossible to be found not guilty by reason of insanity—Kansas being one of only a few states still relying on these rules. And Capote’s details, especially regarding Perry Smith, with whom he seems to have formed a sympathetic bond, call into question the justice of capital punishment even in a case like this—a stance Capote had reached by the time he finished this book.

This is a book that will color your views of these kinds of issues for all time once you have read it. It’s a book whose characters will haunt you. It’s impossible to ignore Perry Smith’s statement, or completely understand his mental state, regarding his first victim, Herb Clutter:

“I didn’t want to harm the man. I thought he was a very nice gentleman. Soft-spoken. I thought so right up to the moment I cut his throat.”

Patricia Smith’s “Emmett Till: Choose Your Own Adventure (p.48)...
Scroll to top