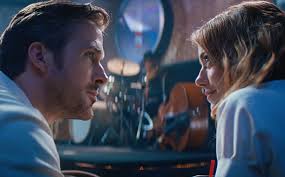 Damien Chazelle, last seen directing the intense and sometimes excruciating Whiplash in 2014, is not exactly the person you would expect to create the romantic, diaphanous musical fantasy La La Land, recently nominated for seven Golden Globe Awards (including Best Picture, Best Director, and Best Actor and Actress in a musical or comedy) and recipient of the New York Film Critics’ Award for Best Film of 2016. Five years ago, that same group gave the award to another film that I was reminded of more than once in watching La La Land: The Artist—Michel Hazanavicius’s black-and-white tribute to the era of silent films, which also won five Oscars including Best Picture for 2011. Like that film, La La Land is unique: There is nothing like it anywhere in the contemporary film scene. And like The Artist, La La Land pays tribute to the past, to the era of great movie musicals—the films of Vincent Minelli, Fred Astaire and especially Gene Kelly. And like The Artist, I expect no follow-up copycat films to appear. Like Chicago and Les Miserables, and to a much less successful extent Rent, The Producers and Jersey Boys, the musicals Hollywood produces will continue to be rare, and continue to be film versions of already highly profitable Broadway hits, rather than the American in Paris and Singing in the Rain of the bygone Hollywood era invoked by this film.

And who would have expected such a film at a time like this? At the end of what many have seen as a disastrous year, into a pessimistic if not cynical atmosphere, comes this nostalgic romp that most moviegoers have found to be uplifting and optimistic, despite its eschewing of the perfect Hollywood ending (I hope that’s not too much of a spoiler).

The film opens with a traffic jam on a Los Angeles freeway, with people sitting in their cars as if in a parking lot. But the camera comes to rest on a single woman on top of her car singing, and from this beginning a whole production number develops, including a band playing from the back of a van and dancers all over the freeway. It’s as if in this opening scene the film is announcing its intention of turning the mundane world into a musical extravaganza—one traffic jam at a time. The opening scene ends as the camera focuses in on Mia (Emma Stone), who is an actress going over her lines in her car, and then on Sebastian (Ryan Gosling), in the car behind her. He is annoyed when she ignores the fact that the traffic has begun to move, and he honks at her and passes her while she flips him off. Obviously, these two are destined to fall in love.

The plot revolves around these characters and their impossibly romantic love affair, which seems predestined as they keep running into one another by chance. Mia is a wannabe actress working as a barista in a coffee shop on the Warner Brothers backlot. But having been raised on a steady diet of classic Hollywood films, she has that dream of stardom that pushes her on from one failed audition to another—until she stakes everything on a one-woman show that she writes and finances herself. It is an effort that seems to end in abysmal failure, though all along she is cheered on by Sebastian. When she asks him if he thinks her script is too nostalgic, he tells her “That’s the point!” And, for good measure, who cares what anybody else thinks?

As for Sebastian, his own nostalgia governs his personal obsession, which is to become a great “pure” jazz pianist and to open his own club. Unfortunately, he is stuck playing Christmas music in restaurants, or ’80’s remixes at parties (there’s an interesting little cameo by J.K. Simmons, star of Chazelle’s Whiplash, playing a cranky restaurant owner who fires Sebastian for wandering from the set list of holiday tunes he’s given him). Sebastian gets what for anybody else would be a big break when his old friend and rival Keith (played by Academy Award winning singer-songwriter John Legend) wants him to join his jazz-pop band The Messengers as their keyboardist. Sebastian’s problem with Keith is that his jazz just isn’t “pure,” it’s not the old time music he loves. But he makes a lot of money, goes on tour with them and is part of a lucrative record deal with a major label, so he suffers through it. His time away from Mia does their relationship no favors, and it doesn’t help that he is conflicted about the kind of music he is playing. He has money now—why doesn’t he open that jazz club he’s always wanted?

But the plot isn’t the important thing about this film. It’s the whole atmosphere of this fairy-tale kind of world where at any moment a song may break out, and magical things happen, like Mia and Sebastian dancing among the stars at Los Angeles’s Griffith Observatory. More than that, it’s the chemistry between Gosling and Stone, who have shown it before in Crazy, Stupid Love and 2013’s ill-fated Gangster Squad. Both are strong and believable—and sympathetic—in their parts, she as a wide-eyed idealistic ingénue who develops into a significant actress, he as an uncompromising artist who sets aside his idealism for practical matters. Together they are a likable couple, maybe the new Bogart and Bacall, with the rough edges polished off.

Which leads me to the biggest pleasure of the film: its own nostalgic obsession with classic Hollywood. There is an unmistakable Casablanca moment late in the film, and images of memorable movie musicals throughout, from the moment early in the film when Gosling holds on to a tree with his right hand while leaning to his left as he sings in a perfect counterfeit of Gene Kelly in Singing in the Rain, to the sequence late in the film that recaps their entire relationship in dance, like the culminating number of An American in Paris. Then, of course there is the most obvious tribute, when Mia and Sebastian sit in the Rialto theater at a showing of Rebel Without a Cause and the film breaks during the scene at the Griffith Planetarium, and they jump in their car and drive to the actual planetarium for their own scene.

But in the end, this greatest pleasure of the film is also in some ways its most glaring weakness. The film works mostly as a tribute to the bygone days of the great musicals, not so much as a great musical in itself. The fact is that the songs, lively or romantic as they may be, are not particularly memorable in themselves. Gosling and Stone, though trained and rehearsed so make those musical numbers smooth and glitzy, are not Fred and Ginger, or Gene Kelly or Debbie Reynolds. Their singing voices are passable, but we’re not talking about Judy Garland or Bing Crosby here. What we have is a pleasurable imitation of greatness and an evocation of nostalgia. Which is why I don’t think, as some critics have suggested, that La La Land marks the return of the great Hollywood musical, any more than The Artist marked a return of the black and white silent film.

And what about that plot? Two romantic idealists work through the whips and scorns of reality that tries to knock them down or force them to compromise, but somehow they win through in the end and achieve their goals? That kind of fairy-tale outcome is not unlike the endings of countless Hollywood fantasies of the past—Singing in the Rain included. But in this film, there is a nagging voice that stays in the back of our minds, that comes from John Legend’s character, who asserts to Sebastian “You’re so obsessed with Kenny Clarke and Thelonious Monk—these guys were revolutionaries. How are you going to be a revolutionary if you’re such a traditionalist? You’re holding onto the past, but jazz is about the future.” One wonders if that is in fact the voice of Chazelle himself, warning us that the nostalgia of this film is pretty, but that film needs to be about the future? That theme may be what echoes in the film’s conclusion, in which it becomes clear to the audience that there are limits to the fulfillment of wishes, and that any dream that comes true leaves casualties in its wake.

I’m going to respectfully disagree with the New York Film Critics about this being the best film of 2016. But it is a very good one, and I’ll give it three Tennysons and half a Shakespeare.