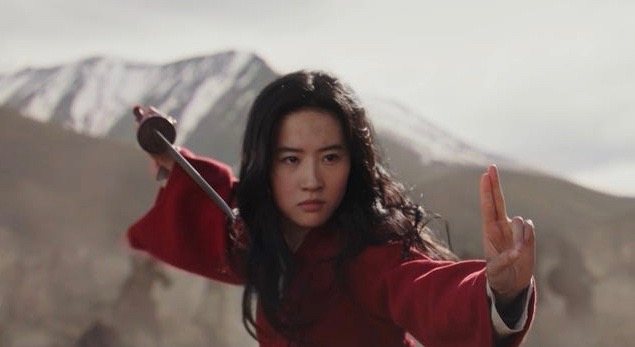 Milan is the latest installment in Disney’s ill-advised obsession with remaking all its classic animated features as live-action films, a trend that seems at best a mistaken reading of current popular tastes as preferring computer-generated effects to animation, and at worst a cynical ploy to recycle previous successes to squeeze every last ounce of money from them. This apparently unstoppable mania has mostly yielded terrible results, a la 2019’s Dumbo, and even when its results are palatable, as in 2016’s The Jungle Book, the product has been significantly inferior to the original animated version.

Such is the case with Mulan. Originally released in 1998, the animated Mulan capped a decade during which Disney’s “princesses” had cast off their familiar “Some Day My Prince Will Come” image, beginning with the Gaston-busting Belle in 1991’s Beauty and the Beast and moving through the John Smith-rejecting Pocohantas in 1995 to the cross-dressing woman warrior Mulan in 1998. And while the film drew criticism for Westernizing or “Whitewashing” an original Chinese legend, there is no question that it went a long way in empowering Asian girls in the United States who had seen precious few role models in the popular media.

The idea of a live-action Mulan first surfaced in 2010, but got nowhere. It grew legs in 2015 and, wishing to avoid past mistakes, Disney tried to hire an Asian director, first approaching Oscar-winning Ang Lee, who declined with regret, unable to fit it into his schedule. Disney also approached acclaimed Chinese director Jiang Wen (Let the Bullets Fly), who had recently appeared in their Star Wars saga Rogue One, but that didn’t work out either. On Valentine’s Day 2017, Disney announced that Mulan would be helmed by New Zealand director Niki Caro, who had made Whale Rider and North Country.

Without an Asian director, it was doubly important for Disney to get the casting right, particularly the lead. They wanted an ethnically Chinese woman who could speak good English and who exhibited passable martial arts skills. They interviewed and tested some 1,000 candidates on five continents until finally settling on the Chinese-born American actress Liu Yifei—a choice the company may have since regretted, since her controversial support of Hong Kong police on social media sparked a widespread movement to boycott the film. The Chinese government launched a rival pro-Mulan campaign, ensuring the film will get plenty of play in the People’s Republic, if not Hong Kong itself. But I digress.

The new version keeps the same basic concept as the old one: Facing a foreign invasion, the Chinese Emperor decrees that one male member of every family in the country must join the Imperial Army to defend against the attackers. Mulan’s father, a war hero, is the only man in her family, and so prepares to join the emperor’s forces, even though his previous service has left him barely able to walk. Mulan disguises herself as a man and joins the army in her father’s place. She eventually becomes an honored warrior and a hero for her family and country.

But that is essentially all that the two films have in common. The writers of the screenplay—and there are a committee of them—have chosen to eliminate some of the most popular features of the original film: the songs, which won an Oscar in 1998, and the talking dragon Mushu, who, voiced by Eddie Murphy, brought some humor to the animated film. Mushu did not go over well in China, and Disney decided to go in a different direction with the live-action film. And director Caro, aiming for realism, chose not to include soldiers singing about going off to war. The dropping of these elements has resulted in an atypically sober film more evocative of Game of Thrones than the Mulan cartoon, and it has decidedly not pleased fans of the original movie.

The screenplay that replaces the original is, frankly, something of a mess, which is not surprising for a script written by a committee. It was put together by Rick Jaffa and Amanda Silver (who teamed up to give us the recent Planet of the Apes movies), and Lauren Hynek and Elizabeth Martin (who teamed up on the TV movie Christmas Perfection and the short Boy Eats Girl: A Zombie Love Story). How they divvied up the work is anybody’s guess—I suppose it may have been something like “OK, Jaffa and Silver, you work on the action scenes, and Hynek and Martin, you do the relationship stuff,” or some such thing.

But it all seems to have been done as a kind of paint-by-number production, where the parts get put together but there’s not a lot of spirit behind the outside shell. Put in humorous early scene where girl is a disappointment to parents. Send her off disguised as a man and give her some embarrassing moments trying to avoid being seen with her pants down. Have a scene where she bonds with her fellow soldiers. Have her save the day, but get banished when they find out she’s a girl. Give her a romantic interest. Give her an antagonist who is enough like her to make it interesting. Throw in some Crouching Tiger, Hidden Dragon martial arts stuff. Explain her superhuman martial prowess by calling it “ch’i,” because that sounds pretty Chinese. Give her a triumphant return. OK, that script’s done. What should we churn out next?

To be sure, the film looks great: There are some magnificent cinematic shots filmed in both New Zealand and China. The costumes are beautiful and the fight scenes skillfully choreographed. But this is the appealing outer shell of a film that has no heart. The weakest parts of the generic script are the training scenes in which Mulan is supposedly bonding with her fellow troops. In a change from the original story, in this film she has an inborn ch’i-abundance that gives her great abilities, which she essentially has to hide while training. So the only reason to show her training is to show her bonding, and there are perhaps two scenes in which she speaks to her fellow soldiers, but so little is said in those exchanges that none of the other soldiers is distinguished as an individual, except Chen Honghui (Yoson An of TV’s The Luminaries), who becomes Mulan’s rather lukewarm love interest, and her commanding officer Commander Tung (famed martial arts choreographer Donnie Yen), an old comrade of her father, and the man who exiles Mulan when she is revealed to be a woman. Both characters are based on Li Shang in the animated film—perhaps the writers were afraid having a single character who was both commander and love interest might make him into too memorable.

The one memorable character other than Mulan and her sympathetic father (Tzi Ma of TV’sThe Man in the High Tower) is Xian Lang, a ch’i-powered shapeshifting witch played by China’s best-known actress Gong Li (who starred in films like Farewell My Concubine), who is aiding Bori Khan (martial artist Jason Scott Lee), the one-dimensional villain invading the empire. In two of the most promising scenes in the film, Mulan confronts Xian Lang, and we learn how much the powerful Xian resents being in a subservient role simply because she is a woman. Unfortunately, the scenes play like rip-offs of scenes between Luke Skywalker and Darth Vader in Disney’s recently acquired Star Wars franchise, and “ch’i” comes off as simply a kind of Chinese translation of “the Force.” Perhaps such scenes might have seemed less derivative if one of the myriad writers of the film had actually been Chinese, or at least Asian.

Disney took a big gamble releasing this film on streaming rather than on the big screen, which movie houses worldwide had anticipated as a chance to lift them from pandemic financial woes. Instead, Disney made it the first major streaming release after launching Disney Plus with the live-filmed Hamilton several weeks ago. And the company gambled that people sitting at home watching their computers were going to be willing to spend thirty dollars to see the film. The film cost $200 million to make (it is the largest-budget movie ever made by a woman director), and it is still too early to know how well the gamble has paid off. But if you want my advice, unless you have four or five kids who are going to gather around the little screen and make it worth your while, I’d save the thirty bucks and wait a few months until you can stream it for free. Two Jacqueline Susanns for this one.