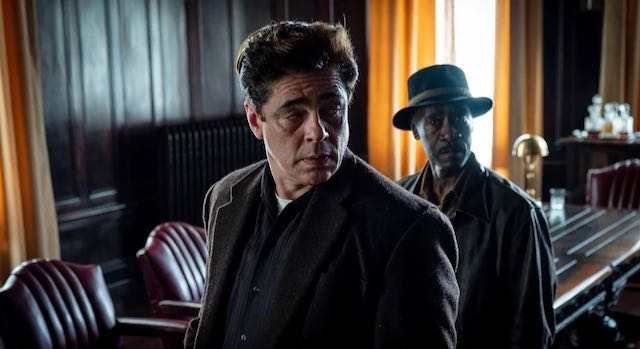 Where to Watch: HBO Max

He Said: It is the mid-1950s. Three criminals invade a family’s suburban home and hold the family hostage at gunpoint while they await the delivery of an important package. There is some tension among the criminals, and the one in charge seems bent on not letting the family get out of this situation alive.

That’s the premise of William Wyler’s classic noir film The Desperate Hours, with Humphrey Bogart and Frederic March. It also turns out to be the premise of Steven Soderbergh’s neo-noir film No Sudden Move, starring Soderbergh veterans Don Cheadle and Benicio Del Toro and, in a small but crucial role, Matt Damon.

The first thing I noticed as the film opened was the cars, and that will probably be the case with most viewers. Soderbergh rustled up a lot of vintage early ’50’s cars for this film, all of them in pristine condition, and my first reaction was, “Ah, a film set in the early ’50’s,” shortly before “Detroit 1954” flashed up on the screen. Wyler’s film appeared in 1955, and was based on a 1954 novel of the same name by Joseph Hayes. The Bogart film came out toward the end of the classic noir period, so when the home invasion occurs, alluding to that time and place, it sets up our expectations for our own noir story.

But Wyler’s film was set in suburban Indianapolis, and Soderbergh’s is set in Detroit, and the initial foregrounding of the automobiles also lets us know something else: Detroit’s most important industry will play a huge part in this film. I want to try to limit the number of spoilers in this review, which is a little difficult because there are a lot of twists and turns that happen here. But let me give you a thumbnail sketch of the plot:

The story opens with a small-time crook named Curt Goynes (Cheadle) being recruited by another gangster, a go-between named Jones (played by an almost unrecognizable Brendan Fraser), who will pay him $5,000 simply to “babysit” with two other guys at a house for three hours—“nobody gets hurt.” One of those other guys is another small-town crook named Ronald Russo (Del Toro)—who we learn is being paid $7,500. The third member of the group is Jones’s own guy, Charley (Kieran Culkin of Succession). Charley is supposed to take Matt Wertz, the father of the family (David Harbour of Black Widow) to his office to steal something important (never mind what) from his boss’s safe while his family is held hostage.

Things begin to go south when it becomes clear to Curt that Charley has very different instructions from his own “nobody gets hurt” promise, and that not only the family but Rosso and himself as well are being set up. Curt makes a sudden decision that sets himself and Russo on a course to “go rogue” and collect this important document from the safe for themselves and find our who and what is behind this tangled web.

In the convoluted events that follow, we are forced, with Curt and Russo, to try to figure out how much they can trust each other, just what this valuable item is, who wants it, what will they pay, and who exactly wants them dead, and why? Things eventually involve local crime bosses played by Ray Liotta and Bill Duke, and a federal agent played by Jon Hamm, who is able to finagle some information out of Matt’s son Matthew (Noah Jupe of A Quiet Place).

I’m impressed by the old-fashioned tone and mood of this film, hearkening back to the noir days, and by the working out of the complex plot of Ed Solomon’s screenplay. Soderbergh’s all-star cast is also memorable, wouldn’t you say, Jones?

She Said: I LOVE the cast. I’m all in on anything Don Cheadle and Jon Hamm are in. Honestly, Ruud, I didn’t notice the cars per se, but rather got the message loud and clear that this was in A TIME GONE BY from their placement in the shots. But they aren’t just time signifiers, as the viewer soon finds. I found the tone rather stylized, and yet still very accessible and engaging. This movie was a great way to spend a Saturday evening.

I did find the many, many, many wrinkles of this movie a bit demanding, though definitely worthwhile. If you’re watching this while doing other things, prepare to be lost. The beauty of this film is how it folds in and in and in on itself, while become more and more significant and societally relevant. Didn’t you think, Ruud?

He Said: Yes, the rather disturbing twist that Matt Damon’s character brings in toward the end, which means absolutely nothing to our petty crooks Cheadle and Del Toro, turns out to be a criminal act by the power mongers of American capitalism, happily supported by a government represented by federal agent Hamm, so much greater than anything the Cheadles and Del Toros of the world that the comparison is ludicrous. And, it turns out, it’s actually true. And only by the way, no consequences for the real crooks. There’s a terrible irony at the end of the film when crime boss Bill Duke asks Cheadle’s character why Curt trusted him, and Curt answered it was because he was trustworthy. You know who isn’t in this movie? The people who actually control our world.

It might not be quite Bogart and March, but Cheadle and Del Toro are both great and underrated actors. I think, inevitably, I’ll give this film three Soderberghs.

This Week’s We Watched It and You Should Too:
He Said: The Last Kingdom
Hot Take: I’m a big fan of Bernard Cornwell’s novels, having read his entire series of Richard Sharpe novels as well as his full Last Kingdom (or Saxon Chronicles) series, which he just brought to an end last November with its thirteenth and final installment, War Lord. Last November. Having finished reading those books, I was compelled to try the TV series, originally a joint production from the BBC and Netflix, and then only from Netflix for the past two seasons.

Although the TV series contain important characters who do not appear in the novels, and also leaves out some important figures and events from the books, it does generally follow the complex plotlines of the novels, devoting an eight or ten episode season to dramatizing two novels per season for the first four seasons of the series. If you are interested in the history of Anglo-Saxon England during the reign of Alfred the Great and his immediate successors, you should give this series a look. It has the tone and feel of Game of Thrones, and dramatizes the gritty and violent Middle Ages through the fortunes of the protagonist Uhtred of Bebanburgh (Alexander Dreymon), a fictional Saxon raised by Danes who becomes Alfred’s reluctant ally.

The first four seasons of the series are available on Netflix with your regular subscription. The fifth and promised final season finished filming in June. No official release date has been announced, but it is likely to premier on Netflix late this year, perhaps November.