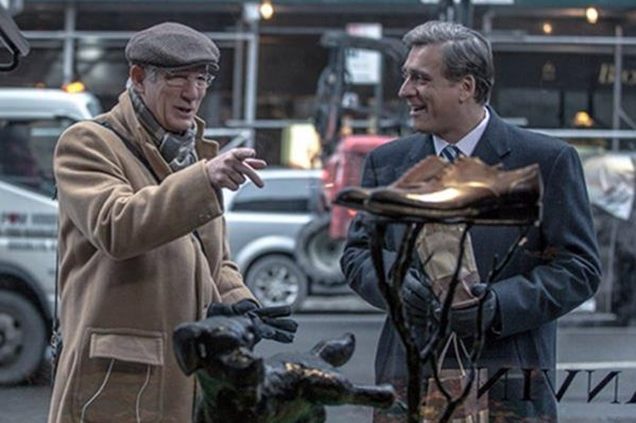 Norman: The Moderate Rise and Tragic Fall of a New York Fixer

It’s nice to know that, amid the dreck of movie selection this Memorial Day weekend, led by the poorly reviewed and disappointingly attended new Pirates of the Caribbean movie, and the even more poorly reviewed and more disappointingly attended Baywatch, there is a decent film that the grownups might go to in Central Arkansas. Of course, it’s only at Riverdale and you wouldn’t have known it was there on Saturday because they did not think to mention it on their Flixster site. Besides, it’s been in circulation since April 14 and has finally made it to Little Rock: it’s called Norman, and is subtitled “The Moderate Rise and Tragic Fall of a New York Fixer.” If it piques your interest I recommend that you run to see it within the next few days, since, unlike the atrocious King Arthur, for example, which is likely to be hanging around theaters for months, Norman will probably exit Arkansas within a week.

Which is too bad, since it’s a worthy film with smart dialogue, a realistic plot, admirable character development and praiseworthy acting. But it lacks superheroes, CGI effects, explosions and mass destruction at video-game pacing, and pure escapism, which the juvenile summer audiences demand. Or at least which they have been conditioned to demand by a film industry that consistently underestimates its audience’s intellect and attention span. But I digress.

Norman is written and directed by Israeli director Joseph Cedar, best known for his 2008 film Beaufort, which was nominated for the Academy Award for best foreign language film that year. As the rather ironically quaint subtitle suggests, Cedar seems influenced significantly by the classical structure of literary tragedy, and he actually divides the film into five acts, each of which has its own subtitle, just in case you’d be inclined to miss the traditional structure of the film’s plot.

The incredibly unlikely tragic hero in this case is Norman Oppenheimer (Richard Gere), a New York “Fixer” as the subtitle suggests. The term implies someone who makes arrangements for other people, someone who gets things done, who finds ways to bring people together to make deals, who makes money if those deals work out. Norman carries around stacks of his business cards that read “Oppenheimer Strategies.” We see him in the beginning of the film trying to be put in touch with rich New Yorkers who will purchase the entire projected tax bill of a small country for eighty cents on the dollar. He typically tells people that he is well acquainted with some other person of influence through his dead wife, who babysat for that man, or had some other connection. He always knows somebody who knows somebody that he wants to put you in contact with. All for his own seven percent “finder’s fee.”

Of course, Norman is only a wannabe fixer. He really doesn’t know anybody, and he seems to spend all his time wandering the streets of New York in a long camel coat with a plaid cap and scarf, trying to make deals on his cell phone because, well, he doesn’t seem to have an actual office. But he always has some new plan, and remains optimistic no matter how many failures he has. And after a failure, he seems to regularly seek some comfort in his local synagogue, where Rabbi Blumenthal (Steve Buscemi) is sympathetic but realistic about who Norman is. When Norman’s nephew Phillip Cohen (Michael Sheen), who actually does seem to have the ear of at least one important financier, tells him he’s like a drowning man trying to flag down an ocean liner, Norman responds “But I’m a good swimmer!”

Still, Norman does manage to score a success almost serendipitously. Early in the film he follows a low-level Israeli politician named Micha Eshel (Lior Ashkenazi), catching him in front of a high-end men’s clothing store admiring an expensive pair of shoes in the window. In a brilliant scene without words, we observe him from inside the store looking out, the shoes in the center of our frame, and watch Norman greet Eshel as if running into him by coincidence, flatter him, touch his arm, then his shoulder, change focus to the shoes, and convince Esher to come into the store and take a look at the shoes. We have just observed how Norman works, and Gere has made us know this character through pure pantomime alone. Norman ends up buying the shoes, convincing Esher to take them as a gift (one that, as his face shows when he looks at the price tag, he can ill afford). But imagine Norman’s surprise when, three years later, Esher becomes the Prime Minister of Israel.

This is, for Norman, the turning point. It enables what the subtitle calls his “moderate rise,” for at an event in New York, the Prime Minister recognizes Norman and greets him warmly, promising to make him his special liaison to the Jews of New York. What practical advantage this gives Norman in his daily conniving is hard to put your finger on, but it does seem at last that the schmuck has found a degree of credibility.

It also gives him some extra confidence, and he makes promises to his loved ones that it seems unlikely he’s going to be able to keep: his nephew wants to get a rabbi to marry him and his Korean girlfriend. His rabbi needs 14 million dollars to keep the local synagogue afloat and Norman says he has an anonymous donor who’ll contribute half. Neither of these seems likely as things begin to spin out of control. The subtitle includes the “tragic fall,” so this shouldn’t be much of a spoiler.

Aristotle argued that the tragic hero should be someone who in some way is superior to the average person, so that the fall is more pitiable and fearful. Norman’s tragedy is more along the lines of Willy Loman’s in Arthur Miller’s Death of a Salesman—a tragedy of the common man. The common man, too, has hopes and dreams and dignity, and the failure of those dreams may be as tragic as Hamlet’s is for him. Whether we feel that with Norman, I will leave to you to decide if you choose to watch this film. Suffice it to say that, as with most tragic heroes, Norman’s fall is the result of the same dominant characteristic that caused his rise in the first place: his penchant for talking up everyone he meets and trying to sell them something.

The tragic hero, too, should experience what Aristotle called anagnorisis: the truth or knowledge gained from tragedy. Norman who, like King Lear, has “ever but slenderly known himself,” is brought face-to-face with a mirror image of himself near the end of the film, in the form of Hank Azaria in a cameo role as Srul Katz, even more of a schlemiel wannabe than Norman ever was, trying Norman’s own tricks on Norman himself, now perceived, apparently, to have some connections in his own right. It takes Norman back for a moment just before the inevitable fall.

Norman is a wise and well-constructed tale that succeeds because of good writing and exemplary acting. Ashkenazi is excellent as an over-trusting politician (Norman has “a tremendous heart!” he says at one point to his skeptical wife). Buscemi gives his customary rock-solid performance as Rabbi Blumenthal, and Michael Sheen is appropriately annoyed and sympathetic by turns as Norman’s long-suffering nephew. And Charlotte Gainsbourg shines as Alex Green, a no-nonsense Israeli intelligence officer stationed in New York. But Gere’s performance makes the film: playing against type—it’s hard to see People’s “sexiest man alive” from the days of An Officer and a Gentleman and Pretty Woman here in the grey-haired, bespectacled, slump-shouldered Norman. Much easier, actually, to see Dustin Hoffman from his Death of a Salesman days—but meeker. In fact, as I watched the film I kept imagining Hoffman in the role, but must admit that even that two-time Oscar winner couldn’t have done better with it than Gere does.

Three big Tennysons for this one. I recommend you see it—it’s a refreshing little oasis in the summer blockbuster desert.