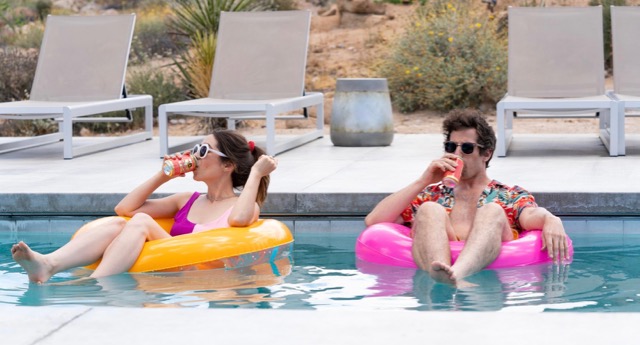 After a hundred days or so of social distancing at home, my wife and I began to sing “They say we’re young and we don’t know, won’t find out unti..i..il we grow” every morning when we woke up, knowing that each day was going to be a carbon copy of the one before. Oh yes, we were going through a Groundhog Day experience, and just as Bill Murray awoke every morning to the same Sonny and Cher serenade that signaled the repeat of February 2, we felt that redundancy as well. That’s why Palm Springs, the new blandly titled film from director Max Barbakow, is perfect for streaming during the current pandemic: We can all really relate to the monotony of the same day being lived through over and over and over again ad infinitum.

The one industry that has seen something of a boom in the current pandemically-sponsored worst economic slump since records have been kept is of course streaming content. This year may not have given us any of those traditional summer blockbusters, but it has given us a taste of what it’s like to debut new streaming films in our own living rooms or on our own laptops, and provided us with small screen blockbusters in their own right, like Hamilton or Spike Lee’s Da Five Bloods, or this film: a small romantic comedy that takes as its inspiration Harold Ramis’s classic comic precept, the man caught in a frustratingly perpetual time loop.

This isn’t the first time that this essentially sci-fi motif has been rebooted since Ramis’s 1993 film. Most notably and most successfully, the 2014 Tom Cruise vehicle Edge of Tomorrow had Cruise reliving the same battle again and again till he got it right. But the same motif was used in the 2017 slasher pic Happy Death Day, and Doctor Strange deliberately causes a time loop in his 2016 film. But Palm Springs is the first really successful return to the use of a time loop in a romantic comedy.

This is the story of Nyles (Andy Samberg—like Murray an alumnus of Saturday Night Live, but, you know, like 35 years later) is the one trapped in a loop that keeps repeating November 9 at a posh desert resort in Palm Springs, California. He is here accompanying his self-involved cheating girlfriend Misty (Meredith Hagne fom TV’s Search Party), who is a bridesmaid at the wedding of her friend Tala (Camila Mendes from TV’s Riverdale). The day of the wedding is the day that Nyles keeps repeating: Each morning begins the same way, as he is awakened by Misty, who reluctantly agrees to have sex with him but, careful not to smear her makeup or break a sweat, she cuts it off because he is taking too long. Apparently each night he watches her through a window engaging in, shall we say, untoward activity with the wedding officiant.

Apparently Nyles has been repeating this day through hundreds of loops before we see him for the first time. But unlike Bill Murray’s weatherman, Nyles is not alone in his loopy status. During the first wedding day we witness, he befriends the bride’s older sister Sarah (Cristin Milioti of Wolf of Wall Street and TV’s How I Met Your Mother) after stepping in to give a rousing wedding speech when she, as Maid of Honor, is clearly reluctant to perform that duty herself. Some of the guests find it odd that he is dressed in a Hawaiian shirt and yellow swim trunks, but at this point he’s clearly just taking things as they come. Afterwards he calmly shows Sarah where Misty is having her little tryst, and he and Sarah go for a picnic in the desert night.

All seems to be going well until out of nowhere a homicidal maniac named Roy (the always watchable J.K. Simmons), shoots Nyles twice with a bow and arrows, chasing him out of his pleasant tête-à-tête with Sarah and into a strangely glowing cave. A screaming Sarah runs after him to the cave mouth, and he warns her not to come in.

The next morning, when Nyles rises to Misty’s wake-up call, Sarah bursts into his room, wanting to know what in the f— he f—ing did to her. Clearly she did follow him into the cave after all, and now is caught in the loop just as he is. She first tries to escape the time-loop by driving all day back to her home in Austin, only to wake up the next morning in Palm Springs on the day of the wedding.

Nyles is already at the acceptance stage of his own imprisonment, and takes everything in stride because he’s become convinced that nothing actually matters. Roy turns out to be another wedding guest with whom Nyles got high one night and who made the mistake of telling Nyles he wished the feeling he had at the time would never end. Nyles took him to the cave and doomed Roy to an eternal loop. This is why Roy periodically tries to murder him in painful ways. Death in this loop is only illusory, but pain is real.

Since Nyles and Roy are both jaded veterans of the Palm Springs loop, it’s Sarah whose development we follow as she tries to adjust to her new life. She finds she can’t change her fate by moving elsewhere, so she tries to kill herself, which after a few attempts she gives up on, since, as Nyles told her, pain is real.

In Groundhog Day, Bill Murray finally breaks the loop by becoming a selfless person and showing a truly selfless love. In Palm Springs, Sarah believes she might break the loop by becoming a truly good person herself. It doesn’t work. The attraction between her and Nyles grows, and it is clear at the end that they truly love each other. But that does not seem to break the loop either. Unlike Nyles, Sarah cannot give in and accept her fate. She has good reason to want to escape from this day that repeats endlessly, but I don’t want to feed you any spoilers so I won’t say what that is. But I will say that Sarah ends up doing something that Bill Murray never thought of: She throws herself into a study of quantum physics, where the idea of time loops has its origins.

And so we come full circle. Palm Springs may seem like a metaphor for the COVID-19 quarantine, and just like the pandemic, the only escape from this loop is found in science. Follow the dictates of science and we will get out of this mess. Now of course, screenwriter Andy Siara and director Max Barbakow (in their first feature film) did not have the current pandemic in mind when they made the film in the spring of 2019 and premiered it at Sundance this past January. But as Tolkien said about Lord of the Rings, it may not be allegorical but it is applicable. If the shoe fits, stream it.

This is a highly enjoyable film: It’s funny and sometimes touching, and the world-weary Samberg and earnest, soulful-eyed Milioti have a pleasing chemistry between them. The plot twists are amusing, though I have to say that the whole glowing-cave-as-cause-of-strange-loops concept seemed a little lame to me. But overall, this is an enjoyable and, it turns out, timely story. Three Tennysons and half a Shakespeare for this one.

Richard Eberhart’s “The Fury of Aerial Bombardment”
Scroll to top