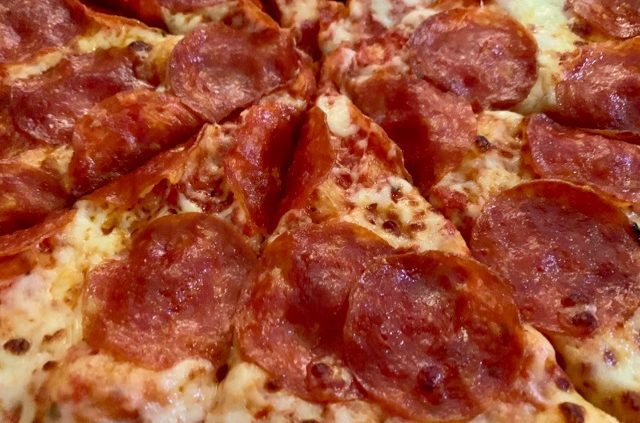 She Said: We were watching our twin preschool grandsons for the weekend, and we needed an easy meal in Conway after taking them to church with my 93-year-old mother. I figured Papa John’s would be a good thing we could pick up on the (slightly out of the) way home.

He Said: Papa John’s is the fourth largest pizza chain in the United States, with more than 5,000 locations, including franchises in Europe, Latin America and Asia as well. It’s been around since 1984 and is headquartered in a suburb of Louisville, Kentucky. There has been some controversy over the past year concerning some of the actions and remarks of the company’s founder and then CEO, but he has been replaced and the company has tried to insure a new image by, among other things, putting former NBA star Shaquille O’Neal on its Board of Directors and employing him in ads for the company. I had thought that Papa John’s in Conway was closing, but in fact it has simply moved from its old spot on the corner of Donaghey and Bruce to the current location on Farris. They do deliver, but we chose to pick up our order.

She Said: As you walk in you are faced with the counter and large menu display. Since I had ordered on the phone, I didn’t need to peruse the offerings. The restaurant seems efficient and focused on churning out those pizza pies. What I found most interesting was the display on the wall that tracks their drivers, because, of course, Papa John’s delivers.

He Said: Since She Said picked up the pizza, there’s really nothing much I can add here, other than things were getting a little tense with the hungry 4-year-old twins in the car.

She Said:While Papa John’s has many different pizza offerings, we were playing to the preschool and OG crowd in the minivan when we decided to go old-school pizza-pie in our choices. And, honestly, I just really like pepperoni pizza… and I don’t like sausage, so I didn’t try that. I was super hungry and stress eating after chasing the boys for 24 hours, so I applied three pieces of the pizza to my face fast. I’m not proud of it; that’s not me living my best food life, but in the end, isn’t that what pizza from Papa John’s is for? Because it’s not my favorite in town, even among chains. The crust is too chewy and doughy, the cheese is too greasy and the pepperoni is only occasionally crispy. The cheese bread was very similar in quality. It smelled great in the restaurant and in the car, but after I ate it, I didn’t feel good about my choices.

He Said: I’d have chosen something less fatty than pepperoni or sausage for the sake of my fat-challenged pancreas, but those were in fact the choices She Said gave me. I had the pepperoni, and it was certainly fine as far as the flavor went—unmistakably pizza with mozzarella and pepperoni, but my tastes run similar to She Said’s and I do prefer a much thinner crust to the thick and chewy. I found the pepperoni on mine to be fine, so I may have enjoyed it a little more than She Said. It’s not my first choice in town either, but if you like think and chewy pizza crust you will probably be quite satisfied with a pie from Papa John’s.

She Said: Where Papa John’s excelled was the service. I called the store up without a menu in front of me and asked basic questions, “Are your sizes small, medium and large?” “Do you have any bread sticks? Cheesy bread?” And the man on the other end was helpful and patient, even though I knew he was pretty busy. He said the food would be ready in 15 to 20 minutes, and I walked in about 13 minutes later and he cheerfully presented me with my order. A+ for this guy and for Papa John’s on service!

He Said:Yes, service was great. The pizza was even ready before they said it would be, which was a bonus for the hungry children.

What We Got and What We Paid: One medium pepperoni pizza, one medium sausage pizza and one order of cheese bread for $23.34. (The wonderful clerk who took the order, input my choices and then looked for ways to get me a deal, so this price reflects a discount of about $6.)

Elapsed Time from Our Arrival to Food Arrival: 13 minutes.

She Said: If you want a convenient, low-priced junk-food pizza option with excellent service, Papa John’s is your place to go!

He Said: It’s a good place if you want to pick up or deliver, and you like thick crusts.

Is Papa John’s Pizza good at what it’s good for? Yes, if you like junk food served up efficiently and reasonably priced—and chewy!

The Secret Life of Pets 2
Scroll to top