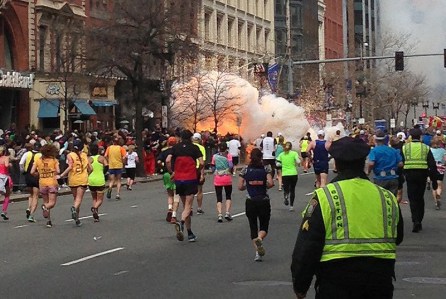 If you have ever been in a big marathon, a half-marathon, or even a 5K, with thousands of other runners, or stood around the crowded finish line cheering on somebody who was running, especially on a sunny spring day when the weather is cooperating, you know the soaring spirits that govern the scene, and the atmosphere of good will that surrounds that place where thousands of people are celebrating the completion of a difficult achievement and experiencing the joy of their physical accomplishments. That atmosphere is recreated in sensual detail in Peter Berg’s new film Patriots Day, to the extent that you as viewer feel as if you are really there at the finish of the Boston Marathon in 2013, and you are as stunned by the explosions as you might have been had you been present that day.

Berg’s film focuses chiefly, though, on the four-day investigation that followed the Boston Marathon bombings that led to the apprehension of the Chechen brothers responsible for the attack, and does so in great detail, moving among the various levels of law enforcement and the dizzying perspective of officers, agents and agencies connected with the investigation. To help us keep up with and integrate all of this detail, Berg creates a role for his favorite collaborator, Mark Wahlberg (star of Berg’s earlier Deepwater Horizon and Lone Survivor), who plays a fictional Boston police detective named Tommy Saunders. For some unexplained act of insubordination, Saunders assigned to don a uniform (a “clown suit” as he calls it) and patrol the finish line of the marathon. Everybody in the department seems to know Tommy, from the police commissioner to the officers walking the beat, and this in part explains how he gets involved at so many points in the investigation. He is Berg’s “chorus” figure in the film, through whom the audience experiences and makes sense of the various strands of the story. He’s also there to mirror the audience’s feelings: since the other cops tend to be all business as they work on tracking down the terrorists, it’s Tommy that we see breaking down, shaken by the carnage, the three killed and 250 injured, ensuring those human faces are not lost to us in the minutia of the investigation.

The film’s other characters are all real people who were involved in the actual investigation. John Goodman, in an uncharacteristically understated performance, plays Boston Police commissioner Ed Davis, who must deal with FBI Special Agent Richard DesLauriers (Kevin Bacon), who will take over the investigation if it is determined to be an act of terrorism—which ultimately, it is. J.K. Simmons plays Watertown Police sergeant Jeffrey Pugliese, who becomes largely responsible for the taking down of Tamerlan Tsarnaev (played by Georgian-born actor Thermo Melikidze), the brother responsible for conceiving and planning the bombing. Michael Beach (of T.V.’s Sons of Anarchy and The Game) plays Massachusetts governor Deval Patrick. The plot proceeds, like the investigation itself, by fits and starts, sometimes in ways that seem random, but always sticking very close to the facts of the case, and always with Wahlberg’s Tommy as a moral and emotional center.

I realize in thinking back on the film with a bit of perspective that what remains of the movie for me is not an overall impression but vivid individual scenes. One of these involves the FBI investigation, to which Tommy is called in after agents, having collected cell phones from the crowd around the finish line and studied the videos taken on all those cell phones, find a suspect when they notice one young man in the crowd who is not startled by and does not look toward the bomb blast. DesLauriers, having mapped out the area of the blast on the concrete floor of the large warehouse he has made his headquarters, asks the streetwise Tommy to work back from the site of the blast to call out to the FBI agents any businesses that are known to have surveillance cameras as he backs up down the “street.” We see the agents immediately tap into those cameras and find the same two suspects as they made there way down the street prior to the explosions. The scene is a bit astounding, suggesting the kind of surveillance of which law enforcement is capable in this post-9/11 world.

Another scene that is masterfully done is the shootout at night in a residential neighborhood in Watertown between the Tsarnaev brothers and members of the Boston and Watertown police forces. As the cornered brothers toss homemade bombs at the police, the officers fire back into the darkness in a chaotic maelstrom of violence–chillingly in an ordinary neighborhood.

And while we’re talking chilling, consider the scene in which Katherine Russell, Tamerlan Tsarnaev’s American wife, is interrogated by a Muslim woman from an undisclosed government agency. Russell (played by Melissa Benoist of T.V.’s Supergirl) is unrepentant and impassive, ironically insisting on the rights granted her by the system her husband is devoted to tearing down. Perhaps even scarier is the interrogator, who makes it clear that terrorists have no rights.

But by far the most memorable scene in this film is the long sequence following the Tsarnaevs’ carjacking of the Chinese app designer Dun Meng (played by Jimmy O. Yang of T.V.’s Silicon Valley). We follow the subdued and terrorized Meng from his kidnapping, through the ATM machine where the brothers empty his account, to the gas station where they stop to stock up for their trip to New York where they plan to bomb Times Square, all the time feeling with Meng the possibility that any second these loose cannons might decide to shoot him if he becomes an inconvenience. Yang’s performance is the most memorable in the movie.

Of course, one of the reasons for that is that his is one of the few characters we get to see beyond the surface. Berg seems to have chosen highly recognizable actors (Bacon, Simmons, Goodman) to play the parts of significant figures in the investigation so that we could easily tell them apart, since they really have no recognizable characters apart from their functions in the plot. Only Wahlberg has a backstory and a personality, but as an Everyman figure his emotions are those of the city of Boston, or the American public in general, as much as they are the individual character’s.

Berg and his co-screenwriters Matt Cook and Joshua Zetumer do try to give some depth to Tamerlan and his younger brother Dzhohar Tsarnaev (Alex Wolff), who are shown living a fairly normal home life, except of course for the bomb-building. We are made to see that there is a human element there, rather than simply a faceless evil, but their motivations are still obscure. I left thinking that the whole thing was simply done for the sake of achieving notoriety, but I’m not sure why. Maybe that’s the point. The “why” will always be obscure.

In the end, this is a better film than I expected from Berg and Wahlberg, whose previous work, and this film’s title, led me to expect an oversimplified flag-waving flick about our men in blue, America’s heroes. But there is little of that, beyond a fairly sentimental soliloquy from Wahlberg three quarters of the way through. Instead it is a fairly nuanced look at the many aspects of the bombing, at the investigation itself, at the bombers, at individuals like Meng and Russell and Pugliese and the parts they played in the story’s outcome. It will be interesting to see how Berg’s film will compare with David Gordon Green’s forthcoming film Stronger, with Jake Gyllengaal, which takes on the same subject. As for Berg’s film, I’ll give it three Tennyons.  It’s worth seeing on a big screen.