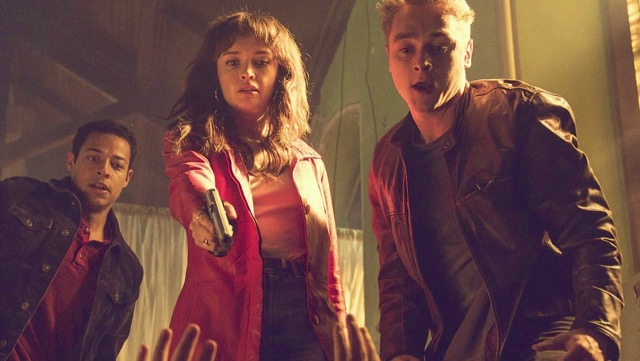 Where to Watch: Rent on Prime Video

He Said: Barnaby Thompson, a successful British producer of such films as Wayne’s World, Hope Springs and An Ideal Husband, tries his hand at directing with a script written by his son, Preston Thompson (Kids in Love) in this new indie Irish film—set, as we are told in beginning credits, “Once Upon a Time in the west…of Ireland.” The allusion to the classic 1968 Sergio Leone film lets you know that you are probably in for scenes of sudden and unexpected violence, but this movie has nothing else in common with the Leone’s somber, slow-moving spaghetti western with its long scenes devoid of dialogue. Its quick-paced, almost manic plot, full of what we are meant to see as witty banter, is more clearly intended to evoke Quentin Tarantino’s Pulp Fiction, with a probable dash (it isIrish, after all) of Martin McDonagh’s In Bruges into the bargain.

But while all three of those films were original in their conception and inspired in their execution, Pixie does little more than emulate them while serving up a comic-heist flick that is only mildly entertaining but ultimately forgettable.

The plot here begins with Pixie Hardy (Olivia Cooke of this year’s Sound of Metal, and easily the best thing in this film) standing over her mother’s grave and vowing vengeance, although we never really know exactly what happened to her mum. Cut to a couple of masked bandits disturbing an apparent synod of Catholic priests and trying to figure out where a bag of money is that they were instructed to snatch, and the priests turning out to be actual gangsters as the scene erupts into a shootout in a very Tarantino-esque conclusion. When the two intruders get away with what turns out to be 15 kilos of MDMA, with a street value of £1,000,000, we learn that one of them is Pixie’s ex-boyfriend Colin (Rory Fleck Byrne of TV’s Harlots) and the other her apparent new lover Fergus (Fra Fee from Les Miserables). We also learn that Fergus was apparently supposed to eliminate Colin and that Pixie intended to take the money and dump Fergus at the airport as she flew off alone to attend art school in San Francisco.

That particular plan having fallen through, Pixie takes up with two other hapless confederates, Frank (Ben Hardy of TV’s The Woman in White) and Harland (Daryl McCormack from TV’s Peaky Blinders), who, having found the bag of drugs, wade in cluelessly and blunderingly into the world of drug criminals to try to sell back the loot. Fortunately for them, Pixie is a little more savvy, and after a scene in which she pins a drug dealer’s hand to his desk with a butcher knife, a la Lucca Brazzi in The Godfather, the three escape and go on a merry road trip across western Ireland, during which Pixie displays a cavalier attitude toward cold-blooded killing of pretty much anybody who gets in her way that would be shocking if the script didn’t portray it in a flippant, comic tone.

We do learn that Pixie’s stepfather is crime boss Dermit O’Brien (Colm Meaney for you Star Trek fans out there), who brings his whole gang to finally confront the outlaw gang of priests and nuns headed by Father Hector McGrath (Alec Baldwin for you SNL fans out there), who has been chasing Pixie to get their stash back. There’s a Gunfight at the OK Corral ending here that kind of makes you wish Meany and Baldwin had had a bit more to do in the film, and during which Pixie shows an inexplicable reluctance to kill the person behind her mother’s murder after she’d taken every other killing in the movie in stride. I don’t know, Jones. Did you believe that?

She Said: I can’t remember… Honestly, I agree with you that this movie was rather forgettable. I remember enjoying it at the time, mostly Pixie’s character in terms of her moxie and brazenness. She runs whatever room she’s in, and she captivates the eye of the viewer, too. But I do not remember what I thought of specific plot points. It was a violent romp, with charming Irish accents and clever plot turns. It was a fun way to spend a Saturday evening at home (No. 53 in a row, I think), but it did not change my life. Or make any kind of imprint on my noggin, it turns out.

He Said:I guess that proves my point. But I do agree that Olivia Cooke as Pixie dominates every scene, not only because I guess she’s supposed to given the script, but also because her screen presence is just so much brighter than anybody else in the scene. She does a wondrous job with what she’s given. Problem is, I don’t think she’s given all that much. She’s a character of much, as you say, moxie and brazenness, but her family background, which is supposed to motivate her, remains pretty fuzzy, and she also remains an object of lust for her two witless accomplices, who essentially just want to have sex with her. So despite the pains that seem to be taken to make her into a kind of Wonder Woman of the Under World, she’s presented at the same time as Jessica Rabbit: A kind of cartoon object of lust who’s not bad, she’s just drawn that way. It’s hard to decide what this film is trying to say about women. If it’s trying to say anything at all.

She Said: Maybe it’s saying there are all kinds of women, and Pixie is one of them…? I’ll give this two Michael Bays for the movie, and half a Soderbergh for Olivia Cooke’s performance.

He Said: I think it’s saying that Pixie is all of them. Or it can’t decide what it thinks Pixie is. Anyway, I agree that Olivia Cooke is outstanding. But the film is a derivative cliché that leaves too many things unclear and ends up without a clear takeaway. I’m with you, Jones: Two Michael Bays and half a Soderbergh for me as well.

This week’s We Watched It and You Might Want To

She Said: The Pembrokeshire Murders

Hot Take: We watched this newly available three-episode Britbox miniseries via our Britbox add-on from Amazon Prime. Starring The Hobbit’s Luke Evans, the police drama, set in 2006, deals with WelshDetective Superintendent Steve Wilkins’ reopening of two unsolved double-murders from the 1980s, which he believes new advances in forensic evidence and DNA technology can help him finally to track down the serial killer responsible. The suspect, imprisoned for burglary convictions, is about to end his sentence, and Wilkins and his team race to find he evidence to convict him before he is let out to kill again. Well made and definitely worth watching.

W.S. Merwin’s “When the War is Over”
Scroll to top