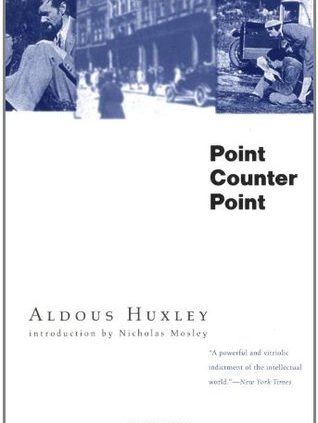 Considered by many to be Aldous Huxley’s greatest novel, despite the appeal and popularity of Brave New World, Point Counter Point is unquestionably his longest and most complex book. It was published in 1928 to mixed reviews, with some hailing the novel as a significant examination of contemporary society—Cyril Connolly in New Statesman called it Huxley’s “most important” novel, while Joseph Wood Krutch in the Nation called it a “comprehensive analysis of the contemporary soul.” But others were less impressed. In Spectator, Rachel Annan Taylor complained that Huxley’s characters were types taken “from the pathology textbooks,” and in the Saturday Review L.P. Hartley called Huxley’s fictional world “a hospital.” Even Huxley’s friend D.H. Lawrence was harsh with his praise: “I do think that art has to reveal the palpitating moment or the state of man as it is,” he wrote to Huxley. “And I think you do that, terribly.”

One has to wonder whether Huxley was amused at the divided reactions to his novel. After all, the reviews themselves engaged in their own “point-counterpoint,” as if under the influence of his novel. In any case, history has been kind to Huxley’s book, and the Modern Library did include it as number 44 on its list of the 100 best 20th century novels in English (they do, it is true, list Brave New World as number 5 on that same list). Yet despite its reputation, the novel is actually out of print. Even the most recent editions promoted on Amazon are available only in used copies. Nor can you get an audible version of the book. So if you’re going to read it, you’re going to have to get it used, or take the shocking step of getting it from your library.

The first thing you should know about this book is that it is a prototypical “novel of ideas,” and that those ideas come at you full on in discussion after discussion among the various characters of the book. The vast majority of the book seems to be characters discussing things (at this point I can hear my own readers crying out, “Physician, heal thyself,” but I digress). Things do happen, of course, but the narrative is not made up of interconnected plot points, but rather of infidelities, betrayals, grave illnesses, artistic triumphs, even a murder (but I won’t say whose or give away any motives), all occurring more as illustrations, refutations or causes of the various characters’ viewpoints.

Hence, of course, the title. At first blush, Point Counter Point refers to the flow of arguments in a debate, and there are plenty of debates in the novel, concerning politics, science, art, religion, in which the various characters will take one side or the other as in a debate. The overall theme seems to be the dichotomy of reason vs. emotion, mind vs. body, as they effect those other themes. It was a constant concern of Huxley’s.

But the title also suggests another meaning of “counterpoint,” as it is used in musical composition. Merriam-Webster’s online dictionary defines musical counterpoint as “one or more independent melodies added above or below a given melody,” or “The combination of two or more independent melodies into a single harmonic texture in which each retains its linear character.” That Huxley had this definition in mind in the composition of his novel is not in doubt. One of the characters, Philip Quarles, a novelist himself, makes notes at one point as he plans the structure of his novel:

“The musicalization of fiction. Not in the symbolist way, by subordinating sense to sound. . . . But on a large scale, in the construction.  Meditate on Beethoven.  The changes of moods, the abrupt transitions . . . More interesting still, the modulations. . . . Get this into a novel…   All you need is a sufficiency of characters and parallel, contrapuntal plots….More interesting, the modulations and variations are also more difficult.  A novelist modulates by reduplicating situations and characters. He shows several people falling in love, or dying, or praying in different ways ….Or, vice versa, similar people confronted with dissimilar problems.  In this way you can modulate through all the aspects of your theme, you can write variations in any number of different moods. Another way: The novelist can assume the god-like creative privilege and simply elect to consider the events in the story in their various aspects—emotional, scientific, religious, metaphysical, etc. He will modulate from one to the other…Put a novelist in the novel. He justifies aesthetic generalizations, which may be interesting—at least to me.”

I quote at length because this is Huxley’s own explanation, put into the mouth of the novelist character in his novel, of exactly what he is doing.

It should come as no surprise that Philip Quarles is usually regarded as a representation of Huxley himself in the novel. Other characters are presumed to be fictionalizations of Huxley’s acquaintances. The character of Mark Rampion, a writer and artist who is perhaps the most respected debater of the novel and is a critic of modern society in general, finding no value in industrialization on the one hand or religion on the other, is generally thought to be Huxley’s fictionalized version of Lawrence, and the section of the book that depicts Rampion’s wooing and wedding of his wife Mary seems to recall Lawrence and his wife Frieda. One wonders if that is one of the details Lawrence had thought Huxley had done so terribly.

The young journalist Walter Bidlake, has scandalously been living with a woman, Marjorie Carling, who has left her husband is bearing Walter’s child. But the relationship is falling apart because Walter is in love with the free-loving Lucy Tantamount, who is based on the aristocratic British writer Nancy Cunard, with whom Huxley had a similar relationship. Walter’s father is the well-known painter John Bidlake, who has had his own multitudinous affairs, and who is based on the Welsh painter Augustus John, the toast of Britain’s art world prior to the first World /war but who work, like Bidlake’s, was in decline in the post-war world. Denis Burlap, Walter’s editor, is a hypocrite who mouths Christian morality in public but is scheming, greedy, and lecherous in his private life. Burlap is purportedly based on author and magazine editor John Middleton Murry, a friend of Lawrence’s and of Katherine Mansfield’s.

One of the more controversial figures in the novel is Everard Webley, political activist and founder, in the novel, of the right-wing Brotherhood of British Freemen. Quarles’ wife Elinor is tempted to have an affair with Webley, who has often been compared with Oswald Mosley, bounder of the British Union of Fascists. However, that organization was not founded until 1932. There were, however, plenty of smaller Fascist movements in Britain in the 1920s to give Huxley fuel for his fire.

Another major character is Maurice Spandrell, purportedly based on the French symbolist poet Charles Baudelaire, whom Huxley would not have known. In the novel, Spandrell is obsessed with finding evidence of God in his own life, and deliberately commits outrageous acts hoping to provoke God to punish his vices. He consistently tries to get Rampion to admit that something in the world is actually evidence of the existence of God, Ironically, if there is anything in the book that suggests this, it’s the fact that when Elinor considers adultery with the Fascist Webley, her young son is stricken with meningitis—evidence, if at all, of a cruel and vindictive deity.

The novel has no traditional protagonist, as each character represents a kind of position on the point-counter-point dialectic. Some, however, do represent positions quite meaningful in today’s world as well as in Huxley’s. It’s somewhat surprising, for example, to find the amateur scientist Lord Edward Tantamount taking an environmentalist position that could easily be pronounced even now, nearly a century later:

“No doubt,” he said, “you think you can make good the loss with phosphate rocks. But what’ll you do when the deposits are exhausted?…What then? Only two hundred years and they’ll be finished. You think we’re being progressive because we’re living on our capital Phosphates, coal, petroleum, nitre—squander them all. That’s your policy.”

This novel is a worthwhile read—providing you can get your hands on a copy. I’m not recommending it replace Brave New World in our curricula, but this is a fascinating book in its own right. Three Tennysons for this one.