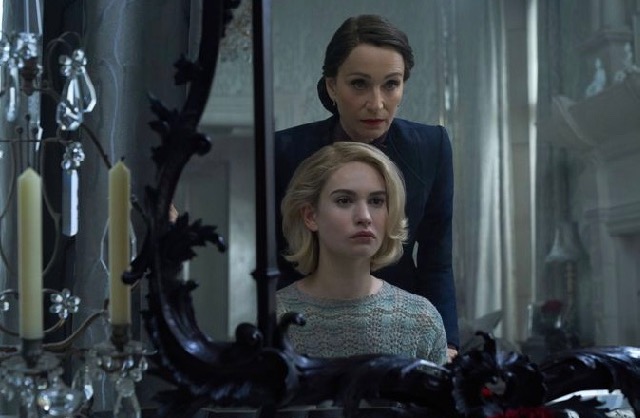 If you’re an Alfred Hitchcock fan, you know that the master of suspense, one of the most respected auteurs in the history of film, never won a Best Director Oscar, despite being nominated five times. He does have four films on the AFI top 100 American Movies list (two of them in the top 15), but the one movie he directed that won the “Best Picture” Oscar is not among them: That film was Rebecca, his 1940 adaptation of the 1938 worldwide best-selling novel by Daphne du Maurier. (In case you need the information for a trivia game sometime, Hitchcock lost the director Oscar that year to John Ford for The Grapes of Wrath.)

Still, Rebecca had eleven Oscar-nominations, with memorable (Oscar-nominated) performances by Lawrence Olivier, Joan Fontaine, and a spooky Judith Anderson as the domineering Mrs. Danvers. I offer all of this backstory as compelling evidence that, though it is 80 years old this year, this is a film that was in no need of a remake. I’m going to go out on a limb and predict that nobody remakes Citizen Kane next year for its 80th. And so director Ben Wheatley (High Rise) has the shadow of Hitchcock looming over him from the beginning of this remake, not unlike the looming presence that Rebecca herself casts on the marriage of the second Mrs. de Winter, the book’s unnamed narrator and protagonist.

That role is taken here by Lily James (Cinderella), who does a competent job as a woman thrust into a mysterious situation with an enigmatic, distant husband and a domineering housekeeper. The role of her husband, Max de Winter, is filled by Armie Hammer (Call Me by Your Name), who has the unenviable task of re-enacting a role originally created by Lawrence Olivier, perhaps the most venerated performer of his generation. Hammer always looks good in a part, though I can’t say that his performance here comes off as well as James’ does. It seems a bit wooden, perhaps without much direction, as he shuts his new wife out and leaves her to the mercy of Mrs. Danvers, played here by Kristen Scott Thomas (Darkest Hour, Gosford Park) whose insidious, scheming, undermining Danvers is easily the best thing about this movie.

One difficulty in the casting of Hammer and James is that anyone familiar with the novel (like my wife, a devoted Rebecca aficionado since her girlhood) knows that Max is supposed to be twice the age of the second Mrs. de Winter. In Hitchcock’s version, Joan Fontaine was 23 while Olivier was 33—but he was made up to look older, with graying temples and the like. In the two-part TV miniseries from 1997, Charles Dance (Game of Thrones’ Tywin Lannister) as Max was 51 while his Mrs. de Winter, Emilia Fox (from TV’s Silent Witness) was 23, so that worked. Here, Hammer is 34 (and looks it) and James is 31. My wife’s first reaction: “That’s not right.”

Still, for the most part, this adaptation remains quite faithful to the novel, at least through the first half. The narrator dreams she goes to Manderlay again, and then begins her story in Monte Carlo, where as a traveling companion to the overbearing Mrs. Van Hopper (Ann Dowd, one of the little gems in this production, as execrable as she is in TV’s The Handmaid’s Tale), she seems beaten down by life until she chances to meet the wealthy widower Maxim de Winter, who sweeps her off her feet with drives along the cliffside beauties of the French Riviera until, in defiance of her employer who wants to take her away from Maxim’s charm, she agrees to become the second Mrs. de Winter.

What this film touches on only slightly, both here and once the narrator is inserted in Maxim’s grand estate at Manderlay under the sway of the disapproving Mrs. Danvers, is the class distinction between the very common narrator and the aristocratic de Winter. Mrs. Van Hopper chides the girl, saying “Do you honestly think he is in love with you?” She’s only a “rebound girl,” Mrs. Van Horner says, and encourages her to come with her to New York, where there are plenty of boys—the implication being that they will be boys of her own class. Class is certainly one of the chief objections Danvers has to this upstart trying to take her beloved Rebecca’s place. Rebecca had all the poise and natural superiority of her class, Danvers implies with her every look, while this new wife, whom she takes for a former maidservant, is barely worthy of her contempt. What is perhaps more apparent here than in previous dramatizations is the sexuality in the obsessed Danvers’ devotion to her dead mistress. Indeed, it’s possible that that in itself provided the impetus behind this particular remake at a time when these implications will be more easily picked up by a more attuned audience.

But midway through the movie things go terribly wrong. And I’m not talking about the plot. In what is perhaps an ill-advised attempt to give the second Mrs. de Winter greater agency, screenwriters Jane Goldman (Kingsman), Joe Shrapnel and Anna Waterhouse (partners on Race and Seberg) turn her into Veronica Mars: When her husband seems implicated in Rebecca’s death, the narrator does some sleuthing of her own, but it results in no information that wasn’t about to be found anyway, so you have to wonder what that was about. Ms. du Maurier would have been scratching her head.

But as if that were not enough, at the end of the film the writers perform an even  more egregious faux pas. Don’t expect to see the iconic scene of Mrs. Danvers stubbornly dying in the fire that destroys Manderlay—the scene that every person who’s read the book or seen the Hitchcock movie is waiting for. I won’t tell you what does happen, but I will tell you that it sure as heck does not measure up. Ms. du Maurier is probably rolling over in her grave.

The film does look pretty. James has some nice-looking period pantsuits to model. And the vistas of the cliffs around Monte Carlo are impressive. Down is fun to watch, and Thomas as Danvers almost makes the film worth your time. But James and Hammer just don’t really click, and the absurd changes in the story turn it into something that really isn’t Rebecca at all. If you don’t actually know the story, you haven’t read the book or you haven’t seen the infinitely superior Hitchcock film, you might think this film is OK. You’d be wrong, but more power to you. Two Jacqueline Susanns for this one.