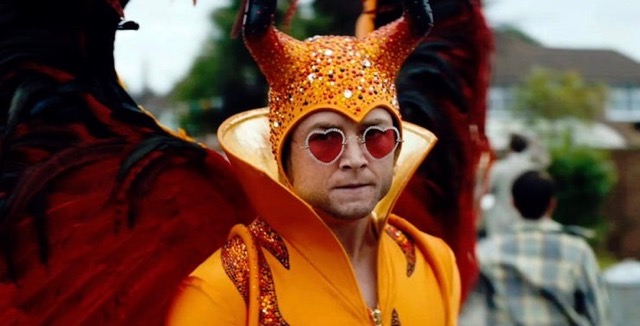 Rocketman, the jukebox musical biopic of Elton John, begins with Taron Egerton (Kingsman), dressed in an orange-and-maroon outfit of feathers, plumes, wings, and demonic horns, walking purposely down a long hallway, and my mind immediately flashed back to last year’s biopic about another gay British rock star of the ’70s, Bohemian Rhapsody, which opened with Rami Malek as Freddy Mercury, suited for the stage and walking through a long passageway until he emerges onto the Live Aid stage for Queen’s most memorable set. Knowing that Rocketman’s director Dexter Fletcher was the man responsible for taking over the last few weeks of Rhapsody’s filming and steering it to its successful conclusion when original director Bryan Singer self-destructed, it might be natural to assume that Elton is about to open a door and walk out on stage. Instead, he opens a door and walks into a group therapy session, announcing that his name is Elton Hercules John and he’s “an alcoholic, a cocaine addict, a sex addict, and a shopaholic.” It’s a bit of a surprising twist, and illustrates the slightly lighter touch behind this film as compared with Rhapsody. But yes, like Freddy Mercury’s bio, it’s the same old story of how musical stars with all the money in the world end up crashing into personal disaster when faced with the allure of drugs, pills, and alcohol. The story is as old as the original 1930s’ A Star is Born, and as timely as…well…the 2018 version of A Star is Born. Look forward to seeing it again in the upcoming biopic of Judy Garland—speaking of A Star is Born.

So the general arc of the movie is awfully familiar. But the details are fascinating and Fletcher does have a number of tricks that keep the movie from being the same old same old. The therapy session, which Elton, as one would think, takes over as he fills the room, acts as a frame for the story as Elton gives a roughly chronological view of his life story, removing more and more of his costume as he goes along—stripping away his façade and stage persona to find the Reginald Kenneth Dwight beneath the Elton John disguise. In many ways the film is structured more like Jersey Boys than Bohemian Rhapsody, since the performances in the latter film are all on stage, but in Rocketman many of John’s songs are presented as in a classic musical, as part of the dialogue or as illustration of character points. In a poignant moment early in the film, Reggie is singing “I Want Love,” and the rest of his family take up the song as the camera wanders about the house to the musical stylings of his self-centered mother Sheila (Bryce Dallas Howard of The Help), his unbending father Stanley (Steven Mackintosh of TV’s Wanderlust), and his sympathetic grandmother Ivy (Gemma Jones of the Harry Potter and Bridget Jones films). That song, as it turns out, dramatically underscores the ultimate theme of the film: Elton does what he does because he’s searching for love, something he never gets from Mom and Dad. When he comes out to his mother and tells her he’s “a poofter, a fairy, a queer,” she’s not surprised, but tells him that no one will ever love him “properly.” And nobody ever does, at least in the film.

So if you’re expecting to hear the original Elton John songs, you’ll be disappointed, since it’s the cast members’ versions you’re going to get. Egerton, however, has a perfectly entertaining pop singing voice, and in the 2016 film Sing he performed one of Elton John’s songs, “I’m Still Standing.” So although Elton’s first pick to play him in a biopic was Justin Timberlake, Egerton gives notable renditions of several numbers, including the title song—performed as a kind of voice-over as Elton plunges into a swimming pool in a half-hearted drug-induced suicide attempt in the middle of a huge blowout party at his house—or of “Crocodile Rock,” which the film depicts him introducing at his 1970 American debut performance at the Troubadour in Los Angeles, which  Fletcher presents as so uplifting that Elton and the entire audience end up floating in the air.

Yes, there are moments of fantasy in the film. There is no actual record of any audience members literally leaving the ground during that number—which, to be totally accurate, did not actually occur at all, since “Crocodile Rock” was not written until 1972. This is just one of several places where screenwriter Lee Hall (who had previously teamed up with real-life Elton on Billy Elliot the Musical) takes some liberties with the story. Hall and Fletcher had unprecedented access to Elton John for purposes of the film, and John is listed an Executive Producer in the credits, so it’s unlikely there is anything in the film that Elton John did not approve. But it’s also true that the film is officially billed as a “musical fantasy” about Elton’s “fantastical human story.” Plausible deniability there when it comes to getting the facts straight.

One of those facts, as the film makes clear, is that  while the music is Elton’s, the lyrics of all Elton’s hits were written by his collaborator Bernie Taupin (played here with warm sympathy by Jamie Bell—who, in a great piece of trivia, played the title role in the 2000 film Billy Elliot, written by Rocketman screenwriter Hall). So the film’s application of all those song lyrics to Elton’s own life is ingenious but somewhat ironic, since the lyrics are really coming from Taupin’s life experiences. But that’s just part of the overall fantasy.

But aside from Taupin and John’s classic songs dazzling our ears, and Julian Day’s recreations of Elton John’s spectacular costumes dazzling our eyes, Egerton’s dazzling performance as the man who at one time was responsible for 5 percent of all record sales worldwide is what holds the film together. It is very much on a par with Rami Malek’s Oscar-winning turn as Freddy Mercury last year. Fletcher, who directed Egerton in 2015’s Eddie the Eagle, seems to have known just how to get a remarkable performance from him as Elton.

The younger portrayers of Elton—or Elton when he was still Reggie—also turn in commendable performances. Matthew Illesley, 9, does a surprisingly lively rendition of “The Bitch is Back,” aimed at his mother. And one of the most memorable scenes in the film involves 14-year-old Kit Connor as Reggie who, neglecting to bring any music for his piano audition at the Royal Academy of Music, sits down and plays exactly what the interviewer had been playing when he came in, purely by ear after hearing it once.

Other members of the cast give creditable performances as well. Howard does so well playing someone you love to hate that she’s perfect as Elton’s narcissistic mother, and Mackintosh is heartlessly cold as his distant father. The other real villain in the film, Elton’s music manager John Reid (played here by Richard Madden, best known as Rob Stark in Game of Thrones), who becomes Elton’s lover but cares only for the money he can make off him, is smoothly diabolical. But each of these roles is little more than a caricature, and together they form a bevy of unrequited loves in Elton’s life. More memorable, and less one-dimensional, are the two characters—Granny Ivy and writing partner Taupin—who actually do show Elton some love, but whom he hardly seems to notice.

Thus “Looking for Love in all the Wrong Places,” though hardly an Elton John song, might well be the theme song of this film. Ultimately, the endnotes of the film inform us that Elton has been sober for decades and has finally found David Furnish, someone to love him properly and to whom he has been married for some time, and, by the way, someone who also produceD this film. Bohemian Rhapsody ultimately won four Academy Awards and grossed more than $900 million worldwide. Rocket man tells a similar story in a more creative way. It remains to be seen whether it and capture the same kind of success. But I’d recommend that you see it. Three Tennysons for this one.