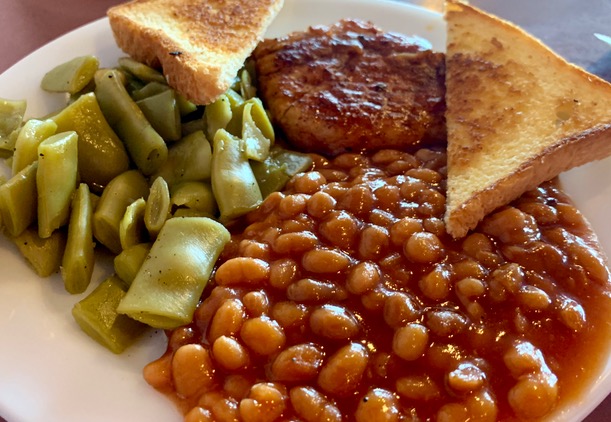 He Said: I didn’t really know much about Shorty’s Bar-B-Que—hadn’t even noticed it before, since, though the address is on Harkider, it’s not actually onthat road but slightly off on a short side street. But it was on the list She Said had compiled, and came up on our radar this week. Since barbecue places are almost as numerous in Conway as Mexican restaurants and pizza joints, I had a feeling of déjà vu all over again walking into the place.

She Said: Yes, we’re getting to a point in the restaurant list where we’re hitting lots of chain pizza joints with the odd barbecue and bakery thrown in. I like to go for meat and veggies on days I’m eating low-carb, so Shorty’s was on deck for a recent Tuesday lunch.

He Said: It’s a pretty bare-bones interior, with only a few small old historic pictures and a few UCA Bears items on the walls, and one TV set tuned to some daytime talk show aimed at old folks, with the volume turned up fairly high. You order your meal from a guy at the counter, who hands you your drink and takes your cash or check (they do not accept credit or debit cards here—keep that in mind before you go or you’re going to be disappointed), hands you your drink, and then brings the food out to your table.

She Said: This place is very “down home.” There’s a large dining area with booths and tables, and the counter to your right as you enter has a friendly man behind it to take your order. I think if you walked in here without a clue what the cuisine was, you’d know in a moment that you were about to nosh on some barbecued meats.

He Said: They have Pepsi products here as fountain drinks. I had a Mountain Dew, as is my wont when Pepsi is at hand. It was 9/10 ice, but what actual soda was there was tasty.

She Said: I had a pretty strong unsweetened iced tea, so I was careful with it so I could go to sleep that night.

He Said: My usual go-to at a barbecue place is some kind of pulled chicken sandwich, because that is likely the lowest-fat item on the menu. That was not an option on the menu here. So I opted for a grilled chicken plate, which came with barbecue sauce on the chicken, and two sides. My wife often considers me full of beans, so I went that direction and ordered baked beans and green beans as my sides. I also had the choice of a roll or toast, and on a whim I picked the toast (there was no choice of what kind of toast—i.e., white, wheat, or rye—and what came was white).

The grilled chicken could have been a little more tender, but it was fine, and the barbecue sauce gave it a nice but not overpowering tang. The baked beans were also fine—the sauce they were in was not as thick as some others I’ve had in town but it was tasty. The green beans were actually my favorite part of the meal: They were not your typical green beans but rather Italian or Romano beans, the flat-green bean variety. They might have come from a can for all I know but they were still a pleasant surprise and tasted quite nice.

The toast was nothing to write home about, as my mother used to say. If I’d had some butter or jelly to put on it I’d have been happier, or if I’d been able to order rye or wheat toast. I think if I come back to Shorty’s I’ll try the roll next time—and also hope for some butter.

She Said: I went for the pulled pork plate, and I also chose the green beans, but skipped the baked beans for cole slaw, as I wanted to eat it with the meat, as I would if I had a sandwich. I skipped the toast and roll, and He Said’s toast experience assured me I hadn’t missed anything there. At Shorty’s, we weren’t given a choice of sauces, but I liked the house’s offering, which was tangy-sweet. I also felt the meat could have been more tender, but overall, it was a solid offering. The cole slaw was very finely grated, and it was tasty and went well with the meat, as I had hoped.

As He Said wrote, the green beans were the star of the plate, nicely salted, tender and tasty. Don’t miss these on your next trip to Shorty’s—especially since green beans at such venues tend to be disappointing.

He Said: The guy at the counter was friendly and efficient. He may have been the cook too as far as I could tell—fortunately there was only one other couple in the place when we got there at the unusual time of mid-afternoon, so he wasn’t terribly busy. It was he who brought the food out to us pretty quickly afterwards. So considering the kind of place this is the service was prompt and satisfactory.

She Said: Yes, I was just thinking of him as the “Shorty,” myself. He was helpful at the counter with our questions and did deliver our orders promptly.

Elapsed Time from Our Arrival to Food Arrival:9 minutes

He Said: It’s possible that Shorty’s has some signature dishes that regulars will rave about. As for me, though, what I had was pretty average. I wouldn’t mind coming back again, if I happen to be carrying enough cash on me (which is rare), but there are other places in town whose barbecue I prefer.

She Said:As the basics of barbecue go, I agree with He Said that my food was fine, but didn’t stand out—except for those beans.

Is Shorty’s Good At What It’s Good For? Shorty’s provides a down-home atmosphere for a good-enough barbecue plate meal.

Top 15 Medieval-themed Films of All Time
Scroll to top