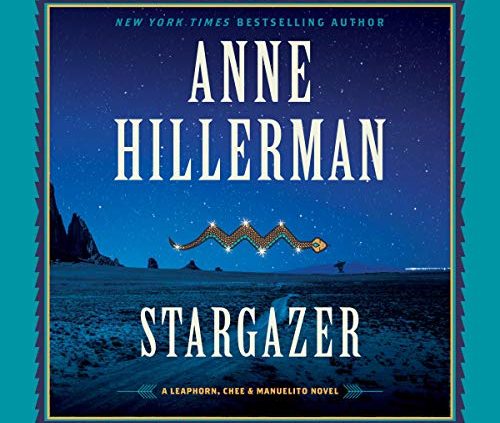 This latest novel in the venerable Leaphorn-Chee-Manuelito mystery series came out on April 13, 2021, and if you’re a fan of the series, you need to get hold of this one—and if you’re not, why not?

Tony Hillerman was an award-winning author of the first 18 novels in this series that introduced not only Navajo police Lieutenant Joe Leaphorn and Sergeant Jim Chee to the reading public, but also filled the New York Times best-selling novels with fascinating details of southwestern Native American culture and religion in books like Talking God and Sacred Clowns. It was a significant loss to the literature of the American west as well as the mystery lover’s world when Hillerman died in 2008.

But to the joy and delight of those readers, Hillerman’s daughter Anne, herself a journalist and writer of travel guides to New Mexico, took up the torch and dared to continue the series under her own name six years later, with Spider Woman’s Daughter in 2014. Stargazer is the sixth book in Anne Hillerman’s continuation of the series.

Understandably, Anne’s contributions to the series have focused more closely on Deputy Bernadette Manuelito, whom Tony had introduced as a love interest for Chee, and whom Chee married in Skeleton Man, Tony Hillerman’s second-to-last Leaphorn-Chee novel. From Anne’s first contribution, in Spider Woman’s Daughter, Leaphorn is disabled by an assassination attempt, and ultimately reduced to an advisory role in future novels. Chee himself gradually takes a back seat, especially in this novel, and by now Bernie’s role is particularly foregrounded.

In Stargazer, an astrophysicist named Steve Jones, who works at New Mexico’s VLA (Very Large Array) institute, is attempting to reunite with his estranged wife, Maya Kelsey, a Navajo woman now working as a teacher. Maya rejects his proposal and presents him, instead, with divorce papers she wants him to sign, at which he loses his temper and threatens her. When the next morning Jones’s body is found dead in his car, shot in the head by his own gun, it appears a likely suicide. But that same morning Bernie gets a call from Maya’s brother Leon reporting her as missing, and Bernie begins a search for the woman, whom we learn was Bernie’s college roommate.

While out of the office, Bernie gets a call from Tara Williams, a detective from Socorro County with whom she is professionally acquainted. She wants to involve the Navajo police in the investigation into Jones’s death since the car was found on the Navajo reservation. Then things become far more difficult: Bernie’s old friend Maya walks into the police station and confesses to murdering her ex-husband. Bernie is absolutely certain Maya is lying about her involvement, but cannot get Maya to withdraw her confession or give any kind of a motive for the murder.

Bernie ends up assisting Tara with the investigation into Jones’s murder, and despite pressure from all sides to close the case and indict Maya for murder, Bernie keeps asking questions, unable to believe Maya is capable of the deed and almost certain that her ex-roommate is lying. But why?

For answers to this last question, Bernie takes advantage of her relationship with her old mentor, Joe Leaphorn, who helps her clarify her suspicions in this area. But Bernie’s quest is also complicated by a number of other issues: She’s involved in another case involving her discovery of an abused woman and a murdered infant in an abandoned house, which has her bucking the FBI. She also has to deal with her husband’s temporary promotion to supervisor of the Shiprock Station, and the friction it causes when he acts as her boss. She has the usual problems with her family, and her mother’s failing memory. And the case of the murdered astronomer in the car takes some unexpected turns when the victim’s co-workers at his lab reveal that Jones had been depressed lately, possibly over professional squabbles with one of his co-researchers. And to top it off, a letter arrives for Jones’s son, purportedly written by his father before his death, explaining his suicide. Bu there are too many holes in the letter to believe in its authenticity. Did the man Bernie suspects of having written the letter also murder Jones?

I’m not going to provide any spoilers here. Let me just say that there is at least one significant red herring in the plot, but it wasn’t enough to keep me from figuring out whodunnit with plenty of time to spare. But there are subplots aplenty involving Chee and Leaphorn as well as Bernie, and there are a number of seeds planted here that will very likely bloom and flourish in subsequent installments in this thriving series.

This particular book—24th overall in the series—is, despite its predecessors, one that would be perfectly fine for a newcomer to the series to read as a first step. You feel the history there, but it does not impede any understanding of the plot. And you get a feel for the future of the characters, as Chee struggles with his responsibilities and possible future as manager of the Ship Rock station, while Bernie looks into the possibility of advancing her own career in a different department—or agency. And in addition to the interest of the mystery itself, this book, like the others before it, provides entertaining and fascinating details of Navajo life and culture, in particular Navajo lore concerning the origins of the stars and the constellations, and human beings’ place in the cosmos. At the same time, you learn a great deal about one of the more remarkable man-made sites in New Mexico, the Very Large Array, and its function in exploring the universe with its radio telescopes for the past fifty years. And finally, we get a real feeling for the great expanse and stark beauty of the Navajo tribal lands. Definitely worth a read!

Walt Whitman’s “Song of Myself,” part I.
Scroll to top