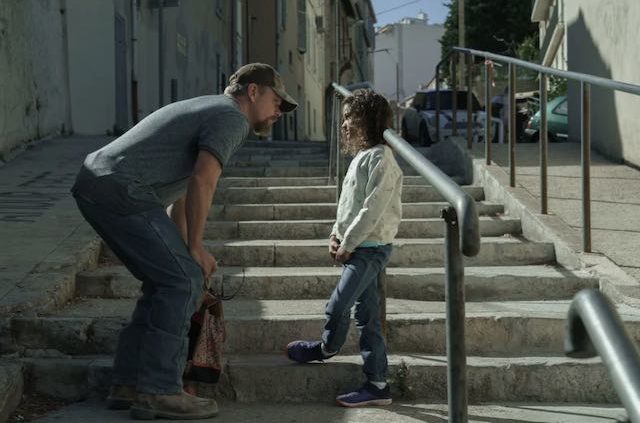 Where to Watch: Only in theaters.

He Said: Tom McCarthy’s last major film, a little thing called Spotlight, didn’t do much other than win an Academy Award as the Best Picture of 2015. His new picture, a Matt Damon vehicle called Stillwater, got glowing reviews and a five-minute standing ovation when it premiered at Cannes last month. But it’s had a little harder going since opening here in America: The film focuses on an American student Allison Baker (played by Little-Miss-Sunshine-no-more Abigail Breslin), who is imprisoned in Marseilles, France, for murdering her roommate—a crime she insists she is not guilty of. If you think this sounds familiar, it’s because it is: Real-life American student Amanda Knox served four years in an Italian prison after being wrongfully convicted of her roommate’s murder. Knox has blasted McCarthy on social media and in The Atlantic for profiting off of “my identity, and my trauma, without my consent.” There seems little doubt that Knox has a point, in that McCarthy has said himself that the Knox case was a starting point for his drama.

But the Knox case aside, knowing that background really doesn’t get us far in appreciating this movie. If it was intended to be a simple “true crime” drama following the events of that case, it would have been one thing. But it’s not that thing. Nor is it what at a few places in the film I expected it to turn into: It is not Liam Neeson in a new iteration of Taken, rampaging through Europe and showing those freedom-hating French liberals what a real American can do to get his daughter justice. Although there are at least a couple of places in the film where Damon’s inner Jason Bourne seems ready to break out.

What we’ve really got in this film is Damon in a remarkably understated role of Bill Baker, an Oklahoma oil rig worker turned unemployed construction laborer, a redneck working class stereotype whose response in most cases is “Yes, ma’am” and who says grace before every meal, who turns out to defy the audience’s—and other characters’—expectations with the depth and complexity of his character. Yes, when his daughter’s French lawyer refuses to follow up on hearsay evidence that Allison believes might prove her innocence, Bill as her father jumps in and, without understanding a word of French, tries to navigate the unfamiliar French-Arab culture and legal system to find the man Allison believes committed the actual murder. But that’s not really what the movie is about. It’s about Bill’s attempt to make up for the lousy father he was to Allison when she was growing up—“I was drinking then” is his chief excuse—and to prove he is not the “screwup” that she is convinced he is. It’s also about his “second chance” family in Marseilles: the French actress Virginie (Camille Cottin from TV’s Call My Agent), who volunteers to help him in his quest, and her 8-year-old daughter Maya (a brilliantly natural Lilou Siauvaud), with whom Bill forms a bond that in some way allows him a “do-over” in the raising of a daughter. The most poignant scene in the film is when Bill brings Allison, allowed a one-day-per-month “parole” from prison, to visit Virginie and Maya, and she sees her father in his new-family environment. She is happy, but secretly warns Virginie not to trust him because, well, he’s such a screw-up.

She Said: This movie was on my radar the second I heard about it because of what I hoped would be the divine mix of Matt Damon, Tom McCarthy and a thoughtfully told crime story. And my hope was that it would be about so much more than Taken was. My hopes were exceeded because this movie uses an extreme situation—inspired by what happened to Knox, but not about her in the final product—to explore its characters’ characters, recalling for me the idea that it’s not that people are unknowable, but rather that they are infinitely knowable. There is always something more to learn about each one of them as their environments and situations change, and the film sensitively and tenderly does so, even if we may not like what we learn.

For me, this movie then really was about love, not liking someone, not affection, not attraction, but love. Love is a deep and profound acceptance of another, even when we do not like their behavior or their beliefs, and even when we don’t understand them. The essence of that love is honoring the humanity we share, not turning away from someone with whom we don’t share commonalities that make relationships easy.

And I’ve been thinking about the title because of all its possible meanings in the context of the story. Bill Baker is from Oklahoma, so Stillwater alludes to the location of our hero. He gives his daughter a necklace from Oklahoma that reads “Stillwater” that figures in the plot, so there’s that. Of course, I thought of Bill Baker as fitting that old saw, “Still waters run deep.” And he does. He’s the strong silent type, but within we find Bill to be infinitely knowable. What do you think of the title, Ruud?

He Said: You’re absolutely right about the title. I think we begin like some of the French people Bill meets, seeing him as a kind of stereotyped American working class redneck who owns two guns and eats at Subway while he’s in France. But as the film develops, there is a depth to him that becomes more and more evident as the film goes on. And what you say about love is really appropriate here, I think. Bill, as it turns out, loves his daughter to the end despite the things he learns about he own deep flaws. He also learns to love Virginie and particularly Maya despite all the things he doesn’t and cannot understand about them.

I did think, however, that the film more or less jumps the shark in the third act. Bill’s actions become outrageous to the extent that he cannot fix his relationships afterwards—at least with his new family. I’m not sure he ever fixes his relationship with the film audience either. This may be just me, though. What did you think about that third act, Jones? I’m planning on giving this movie three Soderberghs—something the Ocean’s 11 star would probably find appropriate.

She Said: Yes, I did think the plot turned in a way my normal suspension of disbelief could not cover for, but for me the real take-away of the movie is the exploration of Bill Baker’s love and commitment, and how we come to know him more deeply throughout the film.

I need to comment on Amanda Knox’s objections to the film, because she has cogent things to say, and the movie has become controversial because of her response. The filmmakers openly talk about the plot being inspired by her ordeal when her roommate Meredith Kercher was murdered in Italy when the two were studying abroad there, and her prosecutor advanced no end of American seductress/temptress theories of the crime in the process of her trial and conviction. Not only was her conviction overturned, an Italian court later completely exonerated her. Knox has spoken out against McCarthy’s use of the storyline the Italian prosecutor wove about her in the globally reported story. I wouldn’t like the movie if I were her, either, and I understand that some may not want to see it because they feel it exploits an already exploited and harmed individual further. On NPR, Knox talked about how she would have liked the filmmakers to talk to her and to make a different movie, more closely resembling her own experience, centering Kercher as the victim and exploring the struggles as Knox herself returns to life in America, a public figure who wants no part of fame and didn’t do anything to get it.

But that’s not how it works. The filmmakers were inspired by her story, but they get to tell the story they want to tell, not the story she would prefer. This story centers Bill and his love for his daughter. It’s worth a watch, but it may make you uncomfortable if you agree with Knox that McCarthy didn’t have a right to wrest her narrative from her to make the film.

I’ll give it three Soderberghs too, with a dose of viewer-be-thoughtful regarding the real-life issues at hand.

We’re Watching it And You Should Too:

Hot Take: The most recent season of Unforgettable, the intricate and thoughtful historic crimes procedural starring Nicola Walker, is now on Prime, with just one episode due to come out before you can stream the whole thing. Do it!