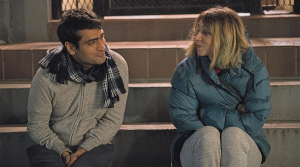 I admit that I really didn’t want to see this movie. For one thing, I thought it had a stupid title. For another thing, I really didn’t want to watch still another movie about a love affair in which some young person is dying of some terrible disease and we get to watch the lovers be all brave and unsentimental and the survivor goes off all devastated but better for the experience. Whatever doesn’t kill you makes you stronger, blah blah blah. Love means never having to say you’re sorry. But I let my awesome wife Stacey Margaret Jones pick the movie this week, and this is the one she picked.

I still think the movie has a really stupid title, but it turns out that was the only thing I was right about. There is a reason it’s the second-best reviewed movie yet this year (Get Out is No. 1 with a 99 percent rating on rottentomatoes.com). But Michael Showalter’s The Big Sick is no maudlin Love Story, but a clever and unusual romantic comedy giving what might be seen as contemporary social commentary, but not in any kind of overt manner.

Essentially, it’s a comedy in the most traditional sense. Romantic comedy as we know it dates as far back as the Greek New Comedy of the fourth century B.C. This comic norm, as described by the literary scholar Northrop Frye, is an archetypal, or universal, literary pattern that appears at all times and places worldwide: a pair of young lovers, representing the new and freer society, are thwarted in their efforts to get together by some obstacle that must be overcome. The obstacle is often something eccentric, trivial or even absurd—the woman declares, for instance, that she can only marry a man whose name is Earnest. The lovers are often also kept apart by some blocking figure—often the girl’s parents, specifically her father, but are ultimately able to overcome the obstacle and circumvent the blocking figure and others who represent the old, more oppressive society, and get together.

In The Big Sick, the blocking figures are the boy’s parents, not the girls, but that’s not too significant a shift from the comic norm. The obstacle, however, is not something trivial or silly: It’s a life-threatening illness that puts the girl in the hospital in a coma for much of the film. And that, of course, threatens to derail the comedy completely. After all, comedy generally deals with the typically human weaknesses like folly or, in the case of darker and more satirical comedy, vice. We usually leave it to tragedy to deal with the true evils of the world, like war or murderous characters like Iago or death-threatening illnesses. But The Big Sick does what the best comedies do: it shows the resiliency of the human spirit to rise above difficulties and obstacles and create a new and freer society, at least for its protagonists.

The film was written by Kumail Nanjiani (of HBS’s Silicon Valley) and his wife Emily V. Gordon, and tells the only-slightly-fictionalized story in which Kumail (playing himself), a stand-up comedian in Chicago, and meets Emily (Zoe Kazan of Ruby Sparks) one night during his act. She’s a grad student in psychology at the University of Chicago. The two hit it off and after what they initially believe is a one-night stand they become more deeply involved amidst a lot of very entertaining and amusing dialogue. Meantime Kumail’s mother (Zenobia Shroff) keeps trying to set him up with nice unmarried Pakistani women, whom she invites to weekly family meals to meet Kumail, saying “Who could that be?” and “Look who just dropped in!” as she introduces them to his son. As the product of a traditional Pakistani Muslim family, Kumail’s parents expect him to marry a Pakistani Muslim whom they choose for him. As his father Azmat (Anumpam Kher of Silver Linings Playbook and Bend It Like Beckham), tells him in a speech that has no doubt been heard by many a second-generation American from an immigrant parent: We made great sacrifices for your sake, and all we ask in return is that you “be a good Muslim and marry a Pakistani girl.”

Things come to a head when Emily wants Kumail to meet her parents, who are visiting from North Carolina, and he makes excuses not to, presumably because he can’t reciprocate. When he tells her that he has to marry a Pakistani bride or will be disowned by his own family. “I can’t lose my family,” he tells her, and she ends the relationship.

Now any traditional romantic comedy worth its salt would at this point have Kumail defy his parents, choose Emily, and go on to marry her and create the New Society, free of the unreasonable barriers and constrictions of the older generation. Of course, he would need to have some motivation for this change of heart. Here, the motivation comes in the form of the forty-megaton “obstacle”: Emily is hospitalized with an unknown and life-threatening disease and must be put into an induced coma to save her life.

Forty megatons is a little heavy for a light comedy, but to its credit the film does not become maudlin or manipulative with sentimentality. It retains a light touch in spite of all. And something truly unexpected occurs: Kumail, who remains a constant presence at the hospital, is forced into a kind of intimacy with Emily’s distraught parents Beth (the always impressive Holly Hunter) and Terry (Ray Romano of Everybody Loves Raymond). In contrast with Kumail’s own parents, Emily’s parents seem to have no problem with their daughter dating a Muslim. What they do resent—what Beth in particular resents—is his rejection of Emily. But Kumail’s relationship with Beth and Terry deepens over the two weeks they are in constant contact in the hospital waiting area and, in one memorable scene, at Kumail’s own standup act, and the film turns out to be just as much about their relationship as it is about Kumail and Emily’s.

I won’t spoil the end for you, but this isn’t a movie you go to for a lot of surprises. It’s not going to dazzle you with its CGI effects or thrill-ride action scenes. You go to it to get a glimpse of a very real relationship among characters with very real emotions and things to say, all of which is done with a comic tone that just makes you leave the theater feeling good, like, say, some classic screwball comedies. Except, of course, those classic comedies would have never had the girl in a coma. For that matter, they wouldn’t have had a Pakistani Muslim romancing a white American graduate student from North Carolina. The film does have the effect of making us see such a relationship as normal.

Kumail is charming and funny playing himself. Kazan is charming and funny playing somebody else, and is a sparkling presence in the film even though she spends half of it in a coma. Both Kumail’s parents are excellent in their roles, though of all the characters in the film they seem the most stereotyped. They don’t get much beyond the “we are Muslim and you have to marry a Muslim” stage. But Hunter is phenomenal as Emily’s mom, making you feel every bit of her terrified concern for her daughter, her anger at Kumail, her frustration with the medical professionals, her outstanding issues with her husband. And Romano is just as likeable as he was in Everybody Loves Raymond, but adds a depth to his character that he could never show in his TV personality. Together they put together that extreme rarity in current American cinema—a film in which people actually talk to each other, and talk in ways that real people actually do.

This is a film you really shouldn’t miss, though it might be under your radar. I’m going to give it four Shakespeares. But I still think it has a stupid title.