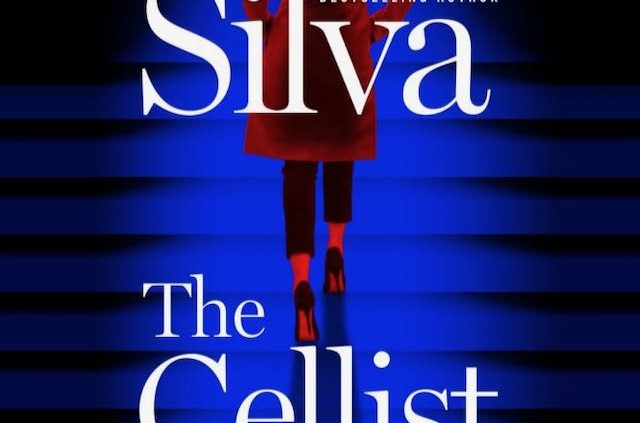 It’s no exaggeration to say that what John le Carré was to novels of Cold War politics, Daniel Silva is to this generation’s political thrillers. For decades, Silva has been producing suspenseful spy-stories dealing with situations involving Muslim extremist attacks on Israel, Nazi crimes concealed by Swiss banks, extremist plots within the Catholic Church, and more recently attacks by the ruling Russian kleptocracy against democratic institutions of the West.

That latter subject is the theme of Silva’s 21st and latest book, the Gabriel Allon spy thriller The Cellist, currently number one on the New York Times Best Seller list. Like most of Silva’s books, this one has its finger directly on the pulse of international events, and his familiarity with facts most of us are only vaguely aware of is, as usual, impressive—fed, no doubt by the expertise of Silva’s wife Jamie Gangel, veteran reporter for CNN.

But I should stress at the outset that this novel is unlike any of Silva’s previous ones in how thinly veiled its fiction is. Earlier installments in the series have talked about “the Prime Minister” or “the President” or “the Pope” or even “the Russian president” in relatively abstract ways: these characters bore some resemblance to politicians currently in those positions, but it was always fairly obvious that in these novels they were being used as fictional characters in stories that reflected some plausible version of global politics. But there is absolutely no question that “the Russian president” in The Cellist is Vladimir Putin and that the actions being depicted in the book may be fictional in their details but are, by Silva and by any reputable Western political analysts, believed to be absolutely accurate in general practice. And more to the point, there is no question that “the President” in this novel is Donald Trump—not a fictional version of him.

Silva has revealed in an interview with his publisher HarperCollins that he had virtually completed work on his new novel by January 6, 2021, when he witnessed with horror the unprecedented attack on democracy staged by the outgoing president’s most ardent supporters. “Nothing could have prepared me for the sight of his supporters rampaging through the halls of Congress,” he is quoted as saying, “breaking windows, stealing documents and computers, defacing art, searching for lawmakers to kidnap or kill.” As a result, Silva scrapped his novel’s planned ending, and several hundred pages of text, and rewrote the novel over the next six weeks, still getting it into his publisher’s hands in time for his July publication date. But by then he had rewritten the ending to include the insurrection in the American capital, and adding a new plot against the incoming president on inauguration day that must be thwarted by Silva’s protagonist, Gabriel Allon, chief of Israeli intelligence.

To be sure, the novel includes the usual disclaimer that the characters in the story are fictional, and that any similarity between them and real people, living or dead, is purely coincidental. But the disclaimer here seems somewhat disingenuous, since it is followed immediately by an afterword in Silva’s own voice in which he makes no bones about his belief that the former president of the United States acted, either ignorantly or deliberately, as an agent of the Russian state, and that that nation’s current czar, having used his unassailable position to make himself the richest man in the world, is behind the misinformation campaigns waged by various troll farms aimed at disrupting American democratic institutions by stoking the fires of American politics so destructively stirred up by Trump’s presence. It should come as no surprise that Silva’s novel has come in for a number of negative reviews from readers who would like to deny what happened on January 6, and have declared on Amazon or on Goodreads that they will never read Silva’s novels again. He seems fairly certain, however, to survive this criticism with little damage to his audience, particularly on the international level.

The Russian president, then, is as much in Silva’s sites in this novel as he is in Gabriel Allon’s. The novel begins with the murder in London of the Russian dissident Viktor Orlov, who had saved Allon’s life in a previous novel. The wealthy newspaper publisher is found dead in his apartment from a toxic nerve gas by former CIA agent, now art dealer, Sarah Bancroft (who first appeared in Silva’s The Messenger), who has found an unknown masterpiece by Artemisia Gentileschi she wants to sell him. There is no mystery as to who is behind the murder, since Orlov was prominent on “the Russian president’s” death list. Gabriel Allon, now in his sixties and head of Israeli intelligence, takes a personal interest in the murder of the man who saved his life, and begins looking into the matter, with the sometimes grudging assistance of British and American intelligence. He is also aided by a mysterious woman who works for the fictional RhineBank of Zurich, where she is a compliance officer whose recommendations are habitually ignored by what is generally regarded as the “dirtiest bank in the world.” Here she works in what is known as the “Russian laundromat,” whose task it is to launder illegal funds coming from Russia.

This woman is Isabel Brenner, who is a classically trained musician—the Cellist of the title—who obtained a degree in finance when she despaired of making her name in music. But she turns out to be more than willing to help Allon ensnare Arkady Akimo, Russian financier, music lover and close friend of the Russian president, through whom Allon hopes to strike at the Russian leader by taking from him his greatest weapon—money. “A nuclear bomb can only be dropped once,” Silva writes, “but money can be wielded every day with no fallout and no threat of mutually assured destruction.” It’s money that funds the trolls ad bots that spew Russian propaganda into the West, and without it those radical social media sources would be crippled.

Is The Cellist Silva’s best novel? No. And it has nothing to do with his political stance, which is nothing more than common sense. The novel has the same kind of breathless international setting and intrigue, the same sophisticated appreciation of art and music, the same suspenseful climax as Allon’s previous adventures. But to be completely honest, financial crimes are just more cerebral and not nearly as exciting as the more visceral crimes we get into in some of the previous novels. Add to that the fact that almost every recent Allon novel has involved some fairly innocent sweet young woman who gets used as bait for some extremely dangerous international criminal and whose life hangs in the balance as a result of Allon’s overconfidence in being able to save her at the crucial moment. For me, that’s getting a little old.

But The Cellist is definitely worth a read, especially if you’re ready for a novel that not only chronicles life in a pandemic-threatened world, but one that deals directly with the violence of the January 6 insurrection. And of course, if you’re a devoted fan of Gabriel Allon, this latest is a must. Three Tennysons for this one.

Emily Dickinson’s “Those Dying Then”
Scroll to top