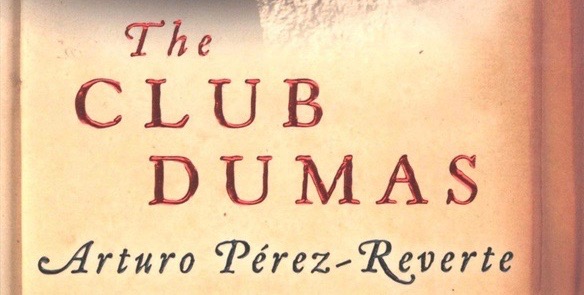 A rare book dealer—of all things—is presented with a job involving the authentication of a manuscript version of a chapter from The Three Musketeers in Alexander Dumas’ own hand, but the search leads him into a more dangerous mystery involving three copies of a proscribed book called De Umbrarum Regni Novem Portis (i.e. “Of the Nine Doors of the Kingdom of Shadows”): books that purportedly contain a secret code that can be used to summon the Devil himself. The adventure, which leads the book dealer to exotic venues like Madrid, Paris, Sintra, and Toledo, reads for all the world like a Dan Brown novel, except for one thing: it’s actually very well written.

And like a Dan Brown novel, this book, by Spanish author Arturo Pérez-Reverte (author of the popular Captain Alatriste series, and other gems) was also made into a movie. Released in 1999, the film was directed by none other than Roman Polansky, who focused mainly on the occult aspects of the novel (a subject he’d been interested in ever since Rosemary’s Baby in the late ’60s). Polansky’s script eliminated the Dumas plot altogether, and so the film was entitled The Nine Gates. Despite a cast that included Johnny Depp, Lena Olin and Frank Langella, the movie was something of a critical and box office failure, particularly in North America. One reason may be the ending of the movie: The first two-thirds of the film follow the book’s plot fairly closely, while the last third departs considerably from the novel’s surprising and intellectually satisfying ending. Still, a few people liked the movie, and read the book afterwards, and as a result were actually disappointed with the end of the novel. Some of these readers have posted reviews of the book based on this experience. I recommend you ignore those reviews.

Pérez-Reverte is a popular, respected but controversial Spanish novelist, a member of the Royal Spanish Academy who has often refused to have his novels translated into any language other than French and who has twice been accused of plagiarism. Eventually, obviously, many of his novels (in particular the Alatriste series) were translated into English, The Club Dumas by Sonia Soto in 1997, when it was promptly nominated for an Anthony Award and a Macavity Award, both for best mystery novel of the year, a World Fantasy Award for best fantasy novel, and an International Dublin Literary Award for best novel.

These accolades are not surprising, since in The Club Dumas Pérez-Reverte has created the kind of post-modern self-reflexive and highly allusive tour de force that book-lovers love to read. Not only is The Three Musketeers a plot device, but Dumas’ novel also provides a blueprint for the plot and characters of the book. Other Dumas works, especially The Count of Monte Cristo, are also important to the novel. Sherlock Holmes, particularly Conan Doyle’s A Study in Scarlet and “A Scandal in Bohemia,” seems to have inspired the detective genre played on in the novel, which also seems to channel Dashiell Hammet’s The Maltese Falcon and other “hard-boiled” detective writers. Pérez-Reverte’s Spanish roots cannot resist allusions to Cervantes’ Don Quixote, but he includes Dante and Milton as well. Dickens, Dostoevsky, Stendhal and Victor Hugo are also part of the wide-ranging tastes of the novel’s characters and narrator, and Melville’s Moby-Dick gets its own group of avid admirers in the book.

Add to these the novel’s detailed discussions of the manner in which Dumas created his huge literary output, including the work of his little-known collaborator Auguste Maquet, who apparently created a good portion of Dumas’ plots, which the master fleshed out—not unlike an apprentice in an artist’s workshop; and details on how a modern forger might fake an antique printed book, including ways to age paper by washing it in tea; and you have a novel that tingles a  book lover’s toes on every page. A significant part of this readerly satisfaction comes in the ending (the part Polansky couldn’t find a way to cinematize): It is no secret that in a good detective novel, the reader vicariously takes on the role of the detective, interpreting every clue and fitting it in to a pattern that, like the detective, the reader builds in his/her mind. An ending that deconstructs that reading process, that explodes the pattern so carefully wrought by both sleuth and reader, revealing how it is the reader who imagines connections where in fact they may not exist at all, is an ending that is likely to enchant, rather than frustrate, the true lover of reading. And that is what happens here.

The story follows a middle-aged book dealer named Lucas Corso, a man described as a “mercenary of the book world,” who is contacted by a book collector and translator named Boris Balkan. Balkan hires Corso to authenticate a manuscript copy of a chapter from Dumas’ Three Musketeers. In Madrid, Corso attempts to contact the manuscript’s previous owner, but he has killed himself, and his beautiful widow, Liana Taillefer, says the manuscript is a fake but wants to take it back from him anyway. When Corso won’t surrender the manuscript, she becomes his enemy, creating a situation that compels Corso to think of her as “Milady de Winter” from Dumas’ novel. The lady’s associate, a dark man with a scar who keeps following Corso and seems to leave a series of bodies in his wake, Corso thinks of as Milady’s evil accomplice “Rochefort” from Dumas’ story.

From Madrid, Corso is called to Toledo by another wealthy collector named Varo Borja, who has come into the possession of a legendary occult volume, Of the Nine Doors of the Kingdom of Shadows, a book reputedly based on an ancient text composed by Lucifer himself, containing secret instructions for calling up the Devil. The book’s Venetian publisher, Aristide Torchia, had been tortured and finally burned at the stake by the Inquisition in 1667, claiming that there was one copy of the text still extant, but hidden away. Trouble is, there are two other copies of the book known to be in existence, so two of the copies must be forgeries. Corso must determine which of the three copies is genuine, and bring it back to Borja, no matter what the cost.

He takes Borja’s copy and travels to Lisbon to confer with eccentric collector Victor Fargas, who owns one of the copies. En route he meets a beautiful young blonde who may actually be a demon (at least that is what she implies) but says she is there to protect him (from what?). She becomes his companion, calling herself “Irene Adler”—the name of Sherlock Holmes’ nemesis in “A Scandal in Bohemia.” When Corso compares his copy of The Nine Doors to Fargas’s, he notices only a few small but suggestive differences in the nine woodcut illustrations in the text. Fargas refuses to sell his copy to Corso, and before Corso can contrive a plan to steal the book, he is attacked by “Rochefort,” whom “Irene” helps him to fight off. But he discovers soon after that Fargas has been killed and his copy of the book burned.

In Paris, Corso seeks out Baroness Ungern, head of a charitable organization with a huge collection of occult texts. When he examines her copy of The Nine Doors, he finds again that there are differences in the woodcuts, and comes to realize that the illustrations contain a key to the entire mystery. But “Irene” calls to warn him that “Rochefort” is once again waiting for him outside the Baroness’s building. Though he escapes “Rochefort’s” malice again through “Irene’s” aid, he learns shortly afterward that the Baroness, too, has been killed, and her library burned.

I won’t spoil the ending, but you’ll be kept on your toes throughout the reading, trying to figure out what Dumas has to do with The Nine Doors, and why all these characters seem to have literary antecedents. Was Dumas’ talent, as we are led to contemplate at one point, the result of a Faustian pact with the Devil? If you are a book nerd, a lover of mysteries and puzzles and hard-boiled detective stories, this is the book for you. Three Tennysons and half a Shakespeare.