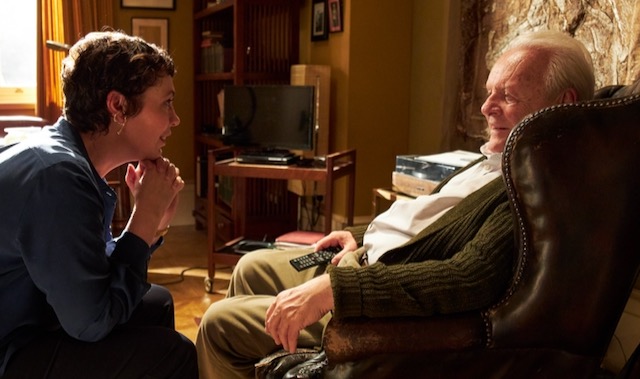 He Said: The experience of watching this film is jarring, disorienting. Less than half an hour into it you are feeling much the same as the protagonist, Anthony (Anthony Hopkins), who suffers from dementia and hardly knows from one minute to the next where he is or who he is with—sometimes it seems like his daughter Anne (Olivia Colman), and sometimes it seems like a stranger, when his daughter Anne is being played by Olivia Williams. As the viewer, you may not be sure which is really her, or whether she’s going to pop up in the next scene being played by Olivia Newton-John. We’re not even sure whether or not she’s married. She seems to have been divorced from somebody named James for five years, but in other scenes she seems to be married to somebody named Paul, who’s either Mark Gatiss (Sherlock) or Rufus Sewell (The Man in the High Castle), neither of whom seems particularly sympathetic to the vulnerable old man—and at least one of whom may have stolen his watch.

Or maybe that was his former nurse, whom he seems to have frightened away. The watch, a chicken, a painting, and the fate of Anthony’s younger daughter Lucy are all motifs that keep reappearing in one form or another throughout the film. And like Anthony himself, we are never quite sure exactly what the truth is concerning any of these things. All we know is we are not leaving our apartment! Or is this our daughter’s apartment? And/or her husband’s? Or is it a nursing home?

I’ve got to think that Chadwick Boseman is the sentimental favorite this year to win a posthumous Oscar for Best Actor, but Hopkins, nominated for the sixth time for this film (he has won once, for Silence of the Lambs), turns in a stellar performance here that would certainly be worthy of the award. If you’re of a certain age, you may well want to cringe every time you see the confusion on his face as a new situation challenges his understanding.

The Father is at last streaming on Amazon Prime and a few other venues, after being available only in theaters since February 26. Now nominated for six Academy Awards, the film can be viewed on your laptop so you don’t have to risk your life in a COVID-infested movie house to see it.  My awesome wife Stacey Margaret Jones said, “This movie must have been a play,” with its limited number of actors and its limited setting in a single apartment—which then becomes another apartment and then a single room. She was, of course, right. Florian Zeller in his directorial debut, adapts his own award-winning French drama Le Père—translated here by Christopher Hampton (Atonement) in an Oscar-nominated adapted screenplay. So let me ask you this, Jones: If you imagine this as the play it originally was, do you think it makes a better movie? And who would you cast in the play?

She Said: Well, I do love the words, “She was, of course, right.” So glad you feel that way! I’m not sure that it makes “a better” either one, for the movie is so very like a play, it feels like they filmed the production in situ. And how could I possibly recast it, except to include Kevin Costner somewhere, because you know I love him, maybe as one of the iterations of the douchey husband?

I think I loved this so much because I almost always love movies that feel like plays, because as a writer, I love to hear actors saying the words of writers. So many movies substitute looks and pointed glances and scenery for dialogue, so it’s a joy to hear people talking to each other, which is how people really do forge, reforge and break their relationships. And I think the limited settings of the movie help to make the viewer feel trapped, as Anthony does, in the maze of his mind. The set doesn’t change, but, for the viewer and for Anthony, the players do, and even when they remain the same, they say different things, or tell him they don’t know what he’s talking about when he mentions something they just told him, like his daughter’s imminent move to France or her bringing home a chicken for supper. I had a stress stomach ache from the switching realities of the film, which I imagine is the point, because that is the reality of Hopkins’ character, which is shifting grasp on what is indeed reality.

As I mentioned while we watched, it reminded me so much of Viggo Mortensen’s interview on the Armchair Expert podcast, in which he spoke at length about his experiences with older family members with dementia. I’m paraphrasing, but he said, “They aren’t confused until you challenge them,” referring to the idea that if your dad says he went to lunch with someone that day who has been dead for 30 years, the confusion and disorientation only come when a carer says, “Bill’s been dead for decades! You didn’t have lunch with him!” Instead, Mortensen said to respond, “What’d you talk about? How is Bill?” After seeing this movie, I feel even more that we correct those with dementia for our own comfort, not for theirs, and we should learn to focus on the feelings and thoughts they have and what they want to express, instead of the facts of their day-to-day life. I certainly hope that’s done for me, after watching the pain Anthony experiences at every disoriented turn in this film.

And I guess that says a lot about the real feeling of the film, that a fictional portrayal could make me take refuge in very real interpersonal strategies. And I think another thing it does very well is that it doesn’t give you an empirical reality. We know where Anthony ends up, but we don’t know the exact reasons why, and that is because Anthony doesn’t either, or he knows them sometimes. It’s a tall order to experience dementia from inside. How do you think the film did in this task, Ruud?

He Said: A douchey Kevin Costner? How could you! You’re right, though, after seeing this, it’s hard to imagine anybody else in the role of Anthony: Hopkins puts on a Master Class in acting in this role. Though it’s interesting to note that when the translated play premiered in London and in New York, Alfred Molina played the part in England, and Frank Langella in America.

But to answer your question, I think when we have seen dementia or Alzheimer’s depicted in film, we have always seen it from the outside looking in, from the point of view of a friend or family member watching a loved one mentally slip away, because of course that is an experience we may recognize and relate to. I think particularly of something like Away from Her, the brilliant Julie Christie performance in a 2006 adaptation of an Alice Munro short story. But Hopkins and Zeller do something here that I don’t think has been done so well before. They actually do put you in Anthony’s shoes. They shake you out of your comfortable role of viewer and drag you into the role of the protagonist to experience everything from his impotent Lear-like raging against the tempest of his confused emotions to the vulnerable childlike pathos of his cries for his mother. It’s a very good thing this movie is only about an hour and a half long. It would be hard to stand it if it were longer. I must present this film with four Hitchcocks, and proclaim it one of the best films of 2020.

She Said: I concur, Ruud. This is a stellar film.

This week’s She Watched It And You Should Too

She Said: The Split
Hot Take: Continuing toward my goal of watching as much of Nicola Walker as possible, I recently binge-watched the two seasons of this British drama that is a coproduction of BBC One and Sundance TV, about a family of family-law solicitors in London that follows their cases at work and their personal lives at home. Walker plays the eldest daughter of three, who has recently left the family law firm to work for a bigger, slicker outfit, right around the time the sisters’ father reappears in their lives after a 30-year absence. No one’s relationships are reliably solid, and every character is infuriating and vulnerable, just like actual people. I loved it, and I can’t wait for Season 3.