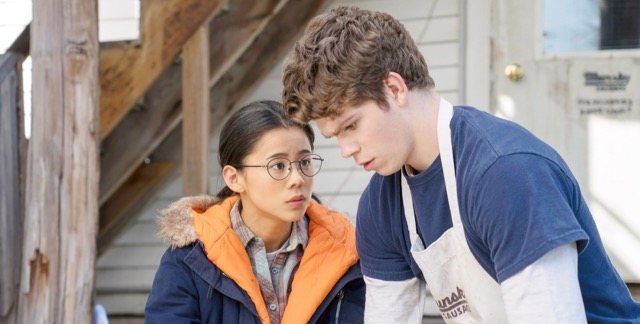 The Half of It

In Plato’s famous dialogue The Symposium, in which a number of guests at a dinner party are asked to discourse upon the nature of love, the character of Aristophanes (the famous comic playwright) relates an old fantastic myth that human beings were originally created as doubled beings, formed back to back, with two heads, four arms, and four legs. Because these proto-humans were very powerful, cartwheeling all over the place, they seemed to present a threat to the gods, and so Zeus decided to split all of them in half. Now some of these double-beings were made up of two males, some of two females, and some of a man and a woman. Thus it is the longing for our lost other half that explains human beings’ searching for love, for that one other person that completes them. It also explains, in anticipation of Alice Wu’s new Netflix movie, why some people look for heterosexual partners, and others for partners of the same sex.

Writer/director Wu, whose only previous film was Saving Face fifteen years ago, opens her new movie with an animated sequence retelling Aristophanes’ myth. It is a suitable introduction to a romantic comedy, especially one involving a same-sex crush at a small town American high school. And it explains right away, in case there was a danger you might miss it, the film’s title: “The half of it” alludes, a viewer is quick to infer, to that other half that true love will direct you to—the missing half of yourself. But as the film progresses, it becomes more and more clear that if that’s where you think this movie is going to take you, well, you just don’t know the half of it.

Wu’s story is set in a fictional small town in the Pacific Northwest called Squahamish, an apparently virtually all-white American town where everybody seems to belong to the same Catholic parish. The screenplay focuses on a seventeen-year-old Chinese-American high school senior named Ellie Chu (Leah Lewis from TV’s Nancy Drew). She lives with her father (Collin Chou of the Matrix movies), who emigrated from China to the U.S. with her mother and toddler Ellie. But her mother has died, and her father, with an engineering Ph.D. from China, has not been able to find suitable work in the United States, handicapped by poor English skills and an inability to move forward after his wife’s death. Ellie is the smartest kid in her class and hence, as we might expect, a kind of pariah. Her intelligence, her poverty and her ethnicity all serve to exclude her from the popular crowd, and her introverted nature doesn’t help. Few of her classmates even know her name (“Hey,” somebody shouts at a party near the end of the film, “the Chinese girl came!”). To make some extra money, though, Ellie writes essays for her more affluent classmates—a fact that her beaten-down English teacher Mrs. Geselschap (Becky Ann Baker of TV’s Girls) is well aware of but ignores because she doesn’t want to have to grade those other students’ awful prose.

It’s that side business that involves Elle with Paul Munsky (Daniel Diemer of TV’s The Man in the High Castle), second-string tight end on Squahamish High School’s football team, which hasn’t scored a touchdown in fifteen years. Paul wants Ellie’s help, not to write an essay for him, but to write a love letter to a girl he is infatuated with, Aster Flores (Alexxis Lemire of TV’s Lab Rats: Elite Force). Ellie knows Aster: she plays piano at the church in which Aster’s father serves as deacon, and since Ellie doesn’t belong to the church, Aster refers to her jokingly as a “heathen.” But there is a hint that the introverted Ellie may feel more than a passing interest in Aster herself, so for this and other reasons Ellie is reluctant to take on the letter-writing task. But she needs $50 to pay her father’s electric bill, and so she swallows her reservations and agrees to write the letter. But just one. Like that’s gonna happen.

If this plot sounds familiar, it’s because Edmond Rostand used it in a little thing he called Cyrano de Bergerac back in 1897. This is not, of course, the first feature film to borrow from Cyrano. Devoted RomCom fans may remember in just the past two years the rather forgettable Sierra Burgess Is a Loser or the clever French film Cyrano, My Love. Two decades ago we were given Whatever It Takes, which was another flop. Perhaps the most successful film in this vein was the 1987 Steve Martin vehicle Roxanne, which gave us the unforgettable line “Earn more sessions by sleeving!” But The Half of It is far and away the most memorable modern adaptation of the Cyrano theme.

If you know Cyrano you know that what’s most likely to happen here is that Aster is bound to be won over by Ellie’s words and mistakenly fall for Paul no matter how obviously he is not the person writing the letters. The original Cyrano only reveals that he is Roxanne’s letter-writing soul mate as he is dying. Here, Aster’s letters back to Ellie reveal that she is not the beautiful airhead one might expect, but a serious literary-minded artist who sparks Ellie’s interest on an intellectual level. For that matter, Paul is not the simple dumb jock that he at first promises to be, but an inventive food entrepreneur who comes up with a brilliant “sausage taco” that, apparently, you have to taste to appreciate, and who also comes to see Ellie as a true friend worth protecting and defending and even, perhaps, loving.

Lemire, Diermer and especially Lewis play their roles with an authenticity worthy of the complex characters they portray. Far from being a typical high school RomCom with characters falling into clichéd categories (jocks, nerds, stoners, mean girls, etc.), Wu’s script explores real issues of identity, including race, class, gender and sexuality, and religion as well. This last is an area that I thought a weakness in the film: The church to which Aster and Paul belong is given a Catholic façade, but its theology seems far more in line with evangelical Protestantism than anything Pope Francis would approve. And a climactic scene that takes place during a church service seems to stretch the willing suspension of disbelief way out of shape. Still, Aster’s (and Paul’s) faith is contrasted with Ellie’ atheism in a way that does not privilege one or the other, but presents both as viable options for the high school-aged explorer of her own identity.

Focusing as it does upon the power of language, this is a surprisingly literary movie, referencing not only Plato and Cyrano but Jean Paul Sartre’s No Exit and Kazuo Ishiguro’s Remains of the Day, and German filmmaker Wim Wenders, whom Aster catches Ellie plagiarizing in her first love letter. We also see clips from classic films like Casablanca, The Philadelphia Story, and His Girl Friday, which Ellie’s father watches to improve his English skills—though this excuse doesn’t work when we see him watching Chaplain’s silent classic City Lights. The film is a feast for audiences who respect the emotive and intellectual power of words and images.

If you do read Plato’s Symposium, you’ll find that Socrates, who has the last word, is not a fan of Aristophanes’ myth of the divided self looking for wholeness. Love, according to Socrates (and, we may infer, Plato), may take many forms, both physical (as in Aristophanes’ depiction of love) and intellectual or spiritual (hence the phrase, Platonic love). In The Half of It, we are presented with Paul’s physical attraction to Aster, Ellie’s friendship for Paul, Paul’s friendship as well as romantic feelings for Ellie, Ellie’s intellectual as well as physical attraction to Aster, Aster’s intellectual attraction to Ellie and their friendship, Ellie’s close familial love of her father, and all other permutations you can think of. In other words, the film takes you beyond the simple mythic opening to Plato’s more complex exploration. There is no simple solution to the question “what is love?”

The Half of It won the Founders Award for Best Narrative Feature at the 2020 Tribeca Film Festival, and premiered on Netflix on May 1. It’s definitely worth your screen time. Three Tennysons and half a Shakespeare for this one. I’d give it four if it weren’t for that screwy scene in the church.