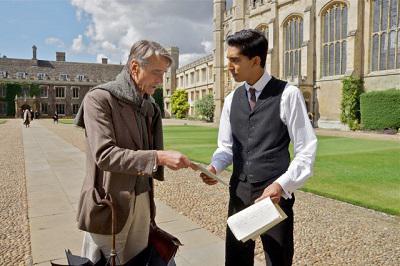 The Man Who Knew Infinity

Unless you are a certified math geek, you are unfamiliar with the story of Srinivasa Ramanujan. Ramanujan was perhaps India’s greatest mathematical genius. Though belonging to the Brahmin caste, he was quite poor growing up, but from an early age was obsessed with mathematics, particularly number theory. Though he won a fellowship to Government College at the age of 17, he never graduated because he neglected his other studies in favor of mathematics. At the age of 22, he married a 9-year-old Brahmin girl, and did obtain a position three years later as a clerk at the Madras Post Trust. He also published a paper called “Some Properties of Bernoulli Numbers” that appeared in the Journal of the Indian Mathematical Society in 1911, and was recognized in Madras as a brilliant mathematician.  In 1914, after writing letters to Cambridge mathematician G. H. Hardy outlining some of his principal theorems, Hardy recognized Ramanujan’s genius and insisted on bringing him to England—a plan vehemently opposed by  Ramanujan’s mother, since Brahmins were expected to eschew foreign travel. In response to a purported vision, however, the mother finally agreed, and Hardy brought Ramanujan to Trinity College, Cambridge in 1914.

At Cambridge, despite his lack of formal training, Ramanujan astounded Hardy and others with his work, which was intuitive and lacked the kind of formal rigor of European mathematics, which Hardy tried to provide. The two had a very productive partnership for five years, and in 1916, Cambridge granted Ramanujan a BS degree “by research” in recognition of his scholarship. But Ramanujan did not really thrive at Cambridge, due in part to an institutionalized prejudice but also due to his poor health. He suffered from what was probably tuberculosis in 1917. In 1918, he was the first Indian elected as a fellow of the Royal Society of London. He returned to India the following year, hoping for a professorship at the University of Madras, but died on April 26, 1920, at the age of 32.

If this doesn’t sound like scintillating material for a feature film, at least it has a human-interest appeal, and Matthew Brown, in his first major film, has written and directed a movie “based on the true story” of Ramanujan’s life. In some ways riding on the coattails of popular and critical successes like The Imitation Game, The Theory of Everything, and A Beautiful Mind, Brown is working with a genre that has become something of a cliché—the brilliant nerdy genius and his difficulties relating to mere mortals in the social sphere. This one does have the added racist challenges of Edwardian Cambridge, and that and the rarified atmosphere of the “poor little genius” genre helps to make math a little bit sexy in this bio-pic.

Of course it doesn’t hurt to have an actor of the caliber of Jeremy Irons playing Hardy, who essentially narrates the story and whose observations frame Ramanujan’s life and give us a familiar Western/British perspective through which to view the protagonist. The Oscar-winning Irons—starring here in a film that has grossed about 1% of what the other film he appeared in this year (Batman vs. Superman) has grossed—is a working actor who can often afford to appear in a relatively low-budget film of much promise because he makes money appearing in, well, other kinds of films. He is impeccable as Hardy, a stiff, cold, very British scholar interested chiefly in math and in things he can prove through logic—and not so interested in relationships, even with someone he has brought from a completely different culture and dropped down in Trinity College without direction. It turns out—as might be predicted—that his relationship with Ramanujan becomes the most important personal relationship of his life.

He is balanced ably by Dev Patel (Slumdog Millionaire) as Ramanujan. Patel, who seems, judging by recent films, to be the only working Indian actor in either the United States or Great Britain, plays a man in many ways the direct opposite of Hardy—one whose mathematical formulae come to him through intuition, not through following the logical steps of proofs, and who sees the abstract concepts with which he works as the expressions of thoughts from the mind of God.

As a kind of choral figure between these extremes, Toby Jones plays John Littlewood, another Cambridge mathematician and collaborator with Hardy on his research into number theory. Jones plays Littlewood as a more balanced scholar, who understands both Hardy and Ramanujan and tries to facilitate their understanding of one another. In a smaller but somewhat showier part, Jeremy Northam plays the philosopher Bertrand Russell, who tends to be much more direct and insightful about Hardy’s failings.

Writer-director Brown based his screenplay on a noteworthy 1991 biography by Robert Kanigel, though in his story Brown exaggerates Ramanujan’s obscurity prior to his coming to Cambridge, ignoring his Indian publication. He also leaves unexplained Ramanujan’s reluctance to leave Madras—though Ramanujan and his wife both mention that they are prohibited from leaving, it is never made clear that this is a Brahmin custom (nor, indeed, that Ramanujan is a Brahmin). Further, Ramanujan’s wife would have been about 12 when he left for Cambridge, but she is portrayed as a young woman in the film.

It is probably also true that Brown found the challenge of making pure mathematics, a completely internal and intellectual experience, into exciting cinema: He shows people getting excited about it (and Patel is especially convincing in this), but we are never actually brought into the private club that would have found these formulae thrilling. Maybe it is impossible to do so on film—although the film’s endnotes, remarking on the significance of Ramanujan’s notebooks from his last year, discovered more than 50 years after his death, note their importance in the study of Black Holes—suggest one approach that might have been taken.

In any case, Brown explores two features of the story that he seems to feel will create more interest. The first of these involves Ramanujan’s difficulties negotiating life in Cambridge: This includes both his attempts to retain his Brahmin faith and lifestyle, including his vegetarianism, in a hostile environment, ultimately to the detriment of his health. More importantly, it also involves the prejudice and downright bigotry not only of the local military thugs who attack him in the street but also of the esteemed professoriate who, with the exception of Hardy, Littlejohn, and Russell, scorn his contributions and deny his election as Trinity College Fellow.  He is, of course, ultimately elected after the Royal Society names him a fellow. This part of the story is sad but not particularly original, and it ends predictably.

Secondly, part of Ramanujan’s disenchantment with Oxford is his absence from his wife, and their relationship forms a contrast with Hardy’s nearly complete lack of human contact. In itself, the relationship between Ramanujan and his wife, and mother, is also a bit clichéd, and seems overemphasized and perhaps sentimentalized in the film as opposed to Brown’s published sources. And of course, in reality remember his wife was 12 when he left Madras. Besides, the film seems to make clear what Littleton says at one point about Ramanujan’s true closest relationship: “Every single positive integer is one of his friends.” In that, at least, he and Hardy are in complete agreement.

This film tells a true story (it does, in fact, stick closer to the facts than, say A Beautiful Mind or The Imitation Game does) that is remarkable and worth knowing, and it does so in an entertaining way that overcomes some of the clichés of the genre, with believable performances by its principle characters, particularly Irons, who is at his very best here. You ought to see it. I’m giving it three Tennysons.