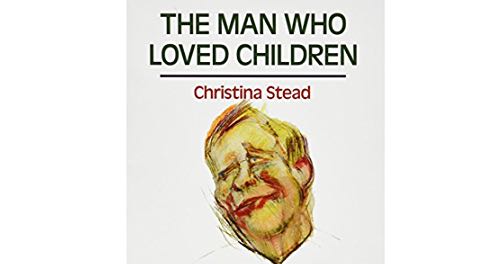 The Man Who Loved Children

In 2005, Time magazine included Christina Stead’s 1940 novel The Man Who Loved Children on their list of the 100 best English language novels since 1923. But this is a novel that continues to be one of the least well-known among that collection of titles. Upon its initial publication, Stead’s book garnered mixed reviews and disappointing sales. It went out of print and seemed destined to be forgotten, but twenty-five years after its initial publication, a new edition was published with an introduction by the respected poet and critic Randall Jarrell, who called it an “Unread Book” and wrote that “no other novel makes so scrupulous, so passionate, and so convincing a study of a family.” On Jarrell’s recommendation the new edition of the book gained it widespread prestige, and ultimately helped put it on Time’sesteemed list.

I’ve seen some reviewers who have called the book “comic.” I’m wondering what book they read. It’s probably true that the eponymous man who loved children, Sam Pollit, is to some extent a comic protagonist, in that he seems to weather every disaster that falls on him with a kind of unquenchable optimism, almost like a modern-day Micawber with the belief that “something will turn up.” But he’s a Dickensian character in the real world, and his naïve idealism has profoundly negative effects on the real people in his real family.

When you begin the book, as I did, without preconceptions, you may find it easy to see Sam as a bit eccentric and impractical, but a likeable sort. He is a naturalist working for the Bureau of Fisheries in the FDR administration in the mid-1930s. Considering himself a disciple of Woodrow Wilson, Franklin Roosevelt, and H.G. Wells, he has dreams of One World under a federal system which also involves a system of eugenics—his Utopia would eliminate the undesirables of the world, it turns out—so that he seems also to be a disciple of Adolph Hitler.

But before we get to see this side of Sam, we see him at home with his children. He has six of them: His oldest daughter, Louise—known variously as “Louie” or “Loo-Loo” is the daughter of his first wife, who died when the child was an infant. Sam married his wife Henny in part to give his young daughter a mother, and with her he has five more children, and wishes he had more. He wants children of every race and color. He is friendly with other children of the neighborhood, who tend to hang out at his house. He insists on meeting Louie’s best friend as if to bring her into the fold. With his children, he has his own quirky language that amounts to so much baby-talk, and with them creates his own family traditions, including Sunday fun-day, which turns out to be no fun at all for the children, who he simply sees as extensions of himself to do whatever he wills them to do. Mainly all he does is talk—he wants to give his children lessons in politics, in botany, in biology, in whatever he seems to think is important at that moment. And about how intelligent he is compared to the rest of the world.

In this oppressive paradise the obvious serpent is the wife Henny. From the first, she is Sam’s antagonist, who does nothing but complain. Mostly she complains about not having enough money. But she also complains about having too many children and about having too much work to do. But she does more than complain: She beats the children and threatens to kill herself and all of the children. She especially despises the adolescent Louie, whom she consistently insults and humiliates, but who just as consistently tries to take care of her stepmother and often takes her side against her own father. Henny beats the children and steals money from them—particularly from her oldest boy Ernie, who is devoted to her and is interested in being a businessman and finds ways to make money for himself. Henny is the spoiled daughter of a wealthy and blue-blooded Baltimore family and never misses a chance to decry how she had married beneath her to this working-class husband. She can’t manage on the money her husband makes, or on what he sends home during the eight months he is away as part of a government scientific team in Malaysia. Her father, though, tends to bail her out when she is in dire straits, until he dies broke. After that, she borrows money everywhere she can and keeps borrowing from new sources to make payments to the old. In short, at least for the first half of the book, Henny seems to be a completely reprehensible character with no redeeming characteristics at all.

Eventually Sam’s faults become more and more manifest. He loses his job with the government (sorry if this is a spoiler, but you can pretty much see it coming from miles off) after having rubbed some people the wrong way in Malaysia, where his friendship with many natives with questionable politics annoy his superiors, and he is the subject of various rumors and insinuations in Washington, the precise nature of which is never revealed, but he refuses to defend himself against these charges, even when they appear in print, because he is above it all. Of course, he loses his job, the family must move and their financial position becomes even more precarious. And there’s a new baby to contend with. At this point Hennie begins to look a little better—well, maybe that’s a stretch. She looks like she may have some maternal instinct after all, but it only emerges occasionally.

Sam, on the other hand, emerges as a true Narcissist, whose relationship with his children is characterized by his bullying them into submission and his ridiculing them whenever they show any signs of individual independent thought. This is especially true in his relationship with Louie, who by the book’s final stages is an adolescent with emerging literary ambitions. Sam has no use for poetry, seeing no practical use for it. But he is completely incapable of understanding Louie, and cannot fathom why she should want an existence independent of his influence. Even when she writes a play for his birthday that unequivocally presents a father whose smothering relationship with his daughter is torture for her, he can’t recognize its relevance to himself.

Ultimately, it is Louie who is the true hero of this novel. Her parents both suffer from personality disorders—her father the narcissist is complemented by her step-mother the histrionic (with her exaggerated emotions and her dramatic threats of suicide). Nobody in this nightmare family actually loves the children—they are too focused on themselves and display no empathy for their children as separate individuals. This is a nightmare family, and if the novel is what Jarrell called a “scrupulous,” “passionate,” and “convincing” depiction of a family, it is so of one of the most dysfunctional families imaginable.

It is interesting to note that Stead, who was Australian, originally set the novel in Sydney, but her American publisher convinced her to make the family American, and set the story in Washington. But Stead was in fact the only daughter from the first marriage of her father, a marine biologist, and had five half-siblings from his second marriage. There are certainly elements of her own life on which the novel is based, which may help make the novel “convincing.”

The experience of reading the novel is excruciating. I frankly could not stand either of the parents and found it difficult to push through to the end, since the novel felt overlong and the plot wandering. I will say that the end is hopeful in its own twisted way, so there is a light at the end of the tunnel. As a depiction of a dysfunctional family with deeply flawed parents, the novel can’t be improved upon. Just know that’s what you’re getting into when you pick it up.

Wendy Cope’s “Not Only Marble, but the Plastic Toys”
Scroll to top