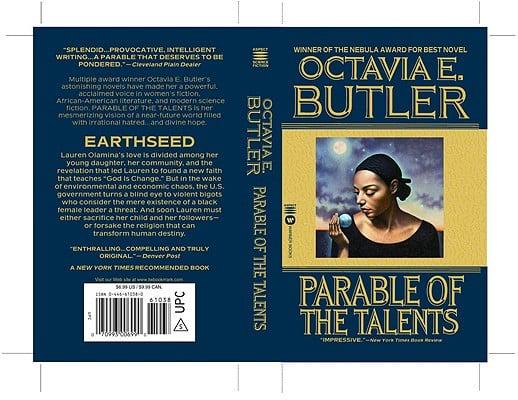 Parable of the Talents

These are the words of Lauren Oya Olamina, the protagonist of Octavia Butler’s Parable of the Talents. Imagine an America in which people get their news in short sound bites that “purport to tell us all we need to know in flashy pictures and quick, witty, verbal one-two punches. Twenty-five or thirty words are supposed to be enough in a news bullet to explain either a war or an unusual set of Christmas lights.” Imagine an America on the verge of ruin as society begins to break own as a result of global warming. Imagine an America in which a narcissistic politician who eschews scientific knowledge is swept into office by Christian evangelical extremists who essentially serve as a front for his violent, misogynist, and racist supporters, who use his election as a front for their own greed or their bigoted agendas. And imagine that this president’s campaign is powered by the slogan “Make America great again.”

Perhaps this is all not very difficult for you to imagine. But Octavia E. Butler imagined it all in the second of her dystopian “Earthseed” novels, published in 1998. After the success of its predecessor, Parable of the Sower, Butler was the first science fiction writer to receive a MacArthur “Genius” fellowship, which she hoped would enable her to write four more books in the Parable series. Parable of the Talents won Butler her second Nebula Award for Best Science Fiction Novel in 1999, but she was never able to complete the third novel, Parable of the Trickster. After several false starts, she found the storyline too depressing, and took a break to write the science fiction vampire novel Fledgling(2005) before dying unexpectedly the following year after a fall outside her Seattle home at the age of 58. But Talents’uncanny similarity to current events is enough to make it worthy of a resurgence in popularity now, more than twenty years after its initial publication. Butler herself thought of the novel as a “cautionary tale,” what she called an “If this goes on…” story. She looked at the news, considered the forces of climate change, gun violence, unbridled capitalism, mass incarceration, and speculated what kind of dystopian future might result from these changes. She also believed that social and political progress were not necessarily inevitably moving forward, and that fear of change could well invite a reversal of progressive advances in society, provoking more openly hostile xenophobia and racism. It was a warning, not a prophecy, she insisted, “although people have told me it was prophecy. All I have to say to that is: I certainly hope not.”

The first Earthseed novel, Parable of the Sower, begins in the year 2024. Seawater is rising because of global warming, and fresh water is a precious commodity. There is mass unemployment and large corporations now own entire cities, “company towns” in which their workers are essentially their own property. Schools are all privatized so that only the rich receive an education, and the police have to be paid to actually protect you. This first Earthseed novel is told in the first person through Lauren Olamina’s journal entries. Growing up in a working class neighborhood in Southern California, walled to keep out roving gangs of homeless marauders, black teenager Lauren has developed her own personal religion, rejecting the faith of her Baptist preacher father. She calls it “Earthseed,” the chief tenets of which are, first, that “God is change,” and that people therefore need to adapt to and to direct that change as best they can. And second, the destiny of human beings is to take root among the stars, on other planets where the human race itself can achieve a kind of immortality. When Lauren’s community is raided and burned to the ground, now orphaned and alone, she leaves the greater Los Angeles area and begins a long walk north on Highway 101 with a stream of other migrant refugees, hoping to reach Oregon or Canada where things are not as bad. It’s a dangerous journey, since the road is full of thieves, murderers and rapists. What makes her journey even more dangerous is her hidden ailment known as “hyperempathy,” a condition (the side effect of her mother’s addiction to a particular popular drug of the time) that forces her to physically experience the pain that those around her are feeling.

Lauren is able to ally herself with other vulnerable refugees, mostly other people of color, racially mixed couples, and other “hyperempaths,” to be safer on the road. Most importantly she gets close to a black doctor named Taylor Franklin Bankole. Ultimately the entire group settles on land that Bankole owns in northern California, and after the 18-year old Lauren marries the middle-aged Bankole, they begin a small agricultural community that they name “Acorn,” all of whose members eventually adopt the new “Earthseed” religion.

In this sequel, Parable of the Talents, we begin four years later, in 2032. In this world, people with enough income have become addicted to high tech virtually reality “dream masks,” in which wearers can take part in fantasies in the form of pre-programed dream narratives. Forced labor has become more common, enforced by high-tech slave collars through which slaves can be controlled with pain (this is technically illegal, but the U.S. Constitution doesn’t seem to be very closely enforced). Women are more blatantly oppressed than ever, with “nags” punished by having their tongues cut out. The novel is told mostly from the point of view of Lauren’s journals from this time period, but these now alternate with entries from her daughter Larkin Olamina, calling herself Asha Vere (the name of a heroine from a popular “dream mask” scenario), who is editing her mother’s journals after her death.

Acorn has become a successful, viable community, which has slowly grown and is on the verge of prospering amid the chaos that is worse than ever in California. Presidential candidate Andrew Steele Jarret, a former preacher and founder of the fundamentalist and fast-growing Church of Christian America, promises to make the country great again by returning to its “Christian origins,” promising to eliminate freedom of religion by getting rid of any non-Christian elements in the nation. (Yes, the Bill of Rights is out the window too). By the time he is elected, violent gangs of his supporters, calling themselves “crusaders” and wearing smocks with crosses sewn on, like an empowered new KKK, roam the country attacking those they call “heathens.”

It doesn’t take long before Acorn, peopled by Earthseed believers, comes to the attention of one of Christian America’s terrorist groups, who attack them at night, put all the residents in slave collars, and turns Acorn into “Camp Christian,” a “re-education” facility designed, ostensibly, to force the residents back to Christianity, while at the same time stealing their property and goods and nightly raping the women. They also take away all of the children in the community and give them to Christian America families to be raised in the faith.

The year and a half the Acorn residents spend in Camp Christian sound eerily like a description of life in a Nazi concentration camp. When Lauren is at last freed by an act of fate, she spends her remaining life successfully building a wide following for Earthseed and unsuccessfully searching for her stolen child. By chance she meets her brother Marc, whom she had long since given up for dead, but who has now become a Christian America pastor. When she seeks his help in tracking down her daughter through the records of the organization he has become a part of, he rejects her story of her baby’s kidnapping, preferring the “alternate facts” that his church would never engage in such a practice.

To say much more about how the story of this novel plays out would be too much of a spoiler, but overall this is not a pleasant or a relaxing read. It is disturbingly contemporary, and far more prophetic than even Butler intended. Butler’s Earthseed books are definitely worth a read. Three Tennysons and half a Shakespeare for this one.