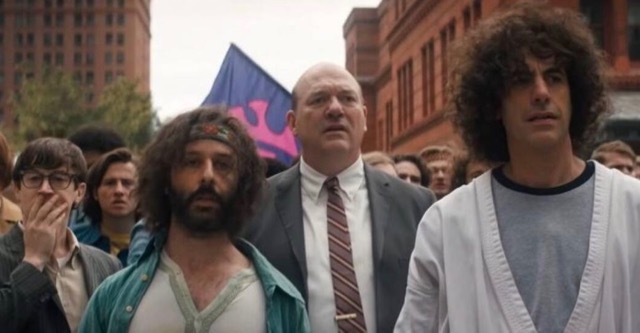 The Trial of the Chicago Seven

Just in case 2020 hasn’t given you enough images of civil disobedience, police brutality, and governmental abuses of power, Aaron Sorkin’s new film takes us back to the good old days of half a century ago, which, in case you’ve forgotten, were filled with civil disobedience, police brutality, and governmental abuses of power. Director and Screenwriter Sorkin, best known for The West Wing, is not going to surprise you as to which side he is on in The Trial of the Chicago Seven. The trial, which initially brought eight defendants into a federal courtroom in Chicago to face charges of conspiracy to incite riots at the 1968 Democratic National Convention, is presented in the film largely for what it was: a politically motivated trial intended to punish the ring leaders of the anti-war protestors whom the newly elected President Nixon had called “bums,” and to demonstrate to his supporters, the “silent majority,” just what a law-and-order administration would do to those who actually exercised their first amendment rights.

Now in reality, things at the convention were not as black and white as Sorkin’s film depicts. There was certainly a good deal of taunting and name-calling of the police on the part of the protestors, and even bricks and other items thrown at them. Some of the protestors did apparently deliberately try to provoke the police. And they did break the law by trying to protest in front of the convention center, which they did not have permission to do (And they didn’t have permission because Mayor Daley wouldn’t grant them permission, since he didn’t want them visible to convention goers). And they broke curfew by not leaving the park they were occupying (though where exactly 10,000 people were supposed to go is questionable). However, the police outnumbered the protestors by several thousand, and were heavily armed, and many of them removed their badges and other identification when they waded into the protestors to crack a lot of heads, sending several hundred protestors to the hospital. When newsman Walter Cronkite called Chicago a “police state,” and when Connecticut Senator Abraham Ribicoff went off script in his nomination speech for George McGovern to say, “And with George McGovern as President of the United States, we wouldn’t have to have Gestapo tactics in the streets of Chicago” (a moment I’d love to have seen included in the montage that begins this film, but which sadly was not), they weren’t kidding.

The justice department under LBJ’s Attorney General Ramsey Clark looked into the riots, but determined—like pretty much everyone who saw the live TV footage of police clubbing protestors willy nilly—that the police were at least as much to blame as the antiwar demonstrators for the rioting. As Sorkin’s film makes clear, it was Nixon’s Attorney General John Mitchell (who was later to do prison time himself) who wanted to send a message that dissent would not be tolerated, who brought charges against the Chicago Eight. There is no evidence that Sorkin’s contention that Mitchell was doing this as a way of getting back at Clark is true. That is one of several inventions in Sorkin’s presentation of history.

After an opening montage, the film begins with Mitchell (John Doman from TV’s Gotham and The Wire) meeting with prosecutor Richard Schultz (Joseph Gordon Levitt of Snowden and Inception), who has no sympathy for the defendants but warns Mitchell that the trial will just give them a public forum. But Mitchell can’t be dissuaded and the trial goes on. It will go on before the bullying and capricious Judge Julius Hoffman (a dominating Frank Langella). We meet the defense attorney William Kunstler (Oscar-winner Mark Rylance from Bridge of Spies), who seems like a voice of reason trying to juggle the conflicting personalities of his clients while carefully presenting his case before the blatantly biased Judge Hoffman. And we meet the defendants: There is Black Panther co-founder Bobby Seale (Emmy-winner Yahya Abdul-Mateen II of Watchmen), who was in Chicago to give a speech and was never anywhere near the convention or the park with the protestors, and who has never met any of the other co-defendants whom he is alleged to have “conspired” with.

There is Abbie Hoffman (a surprisingly effective Sacha Baron Cohen of Borat fame) of the Youth International Party (Yippies) whose antics threaten to turn the court room into a circus, and his Yippie co-founder Jerry Rubin (Emmy-winner Jeremy Strong of Succession), presented here somewhat unfairly as Hoffman’s less amusing sidekick. From the Students for a Democratic Society there is Tom Hayden (Oscar-winner Eddie Redmayne of The Theory of Everything), author of the SDS founding document, the Port Huron Statement, who is presented in the film as one who wants to work within the system rather than bring it down, and who wants to take the trial seriously as a criminal trial rather than a political showcase. The SDS is also represented by Rennie Davis (Alex Sharp of The Hustle), who, again somewhat unfairly, has the role here of playing second fiddle to Hayden, though he seems most determined of all to remember the focus on ending the war, and keeps a journal recording the names of all American soldiers who die during the course of the trial. He also has a big scene when his own skull is bashed in by police.

David Dellinger (John Carroll Lynch of Fargo), at 54 by far the oldest of the defendants, was chairman of the National Mobilization Committee to End the War in Vietnam (Mobe for short) and a committed pacifist since the Second World War. He maintains a pacifist calm during the trial, though Sorkin has him striking a guard who is trying to force him to sit down when he rises to object to one of Judge Hoffman’s irrational rulings (this incident never really happened). The other two defendants—Lee Weiner (Noah Robbins from TV’s Unbreakable Kimmy Schmidt) and John Froines (Danny Flaherty from TV’s The Americans) seem to have been involved only in Mobe’s peaceful demonstrations, and seem to be included in the indictments only, as Hoffman tells them (Abbie, not the Judge) to give the jury someone to acquit so they won’t feel bad about convicting the others. They conclude that the trial is the Academy Awards of Protests, and it is an honor just to be nominated.

Sorkin’s script relies on actual trial transcripts for the scenes in the courtroom, so what occurs there is mainly accurate, most notably Judge Hoffman’s order to have Seale gagged and bound to his chair to prevent him from addressing the court—the judge had refused to delay his trial when his lawyer was hospitalized for gall-bladder surgery, and had refused Seale’s request to represent himself and quashed any attempts he made to cross-examine witnesses who testified against him. The only difference is that in real life, Seale was restrained in this way for days, not simply the one day Sorkin portrays it. Ultimately, Seale is separated from the trial (and was never brought to trial for this charge). Sorkin has prosecuting attorney Schultz recognize the inappropriate treatment by the judge and ask for a mistrial for Seale, but that is not how it actually came about. Other incidents in the courtroom are more or less accurate, except for the crowd-pleasing ending scene, which will make you feel good like a rousing speech from President Josiah Bartlet, but unfortunately it did not actually happen that way.

Sorkin takes more liberties in scenes outside the courtroom, especially in scenes between Hoffman and Hayden, the two rock stars of the trial, who he is at pains to put into conflict. Thus he exaggerates the differences between the two, having Hayden accuse Hoffman of not actually wanting to see the war end, because it would take away his celebrity, while Hoffman declares that if a movement has no money, it needs to draw attention to its cause through publicity stunts. Another of Sorkin’s inventions is Richard Schultz’s uncertainly sympathetic attitude toward the defendants. In reality, Schultz was a vicious attack dog for the government, and had no difficulty going along with all of Judge Hoffman’s peccadillos. As for defense counsel William Kunstler, far from being a voice of calm and reason during the trial, he seems to have done as much as his defendants to make the trial a political demonstration.

In the end, the film is a collection of stirring performances, particularly by Abdul-Mateen as the abused Seale, Langella as the abusive judge, and Cohen as the fiery Hoffman. It’s an embarrassment of acting riches and a feast for Oscar-hungry chops even before the appearance of Michael Keaton as surprise witness Ramsey Clark—who, as portrayed in the film, Judge Hoffman refused to allow to testify before the jury, but who did not in fact give the precise evidence that Sorkin has him give.

As a film, it must be admitted that the overall coherence of the narrative in The Trial of the Chicago Seven is not as strong as might be wished. Sorkin does try to tie it up with the internal Hoffman-Hayden rivalry and his appropriate but imagined ending, but too many things don’t fit very well. The entire Bobby Seale plot, though impossible to ignore, is at least structurally a distraction from Sorkin’s main plot—and perhaps deserves a movie of its own. And the historical inaccuracies are lamentable. But this is too important a movie to ignore. Three Tennysons and half a Shakespeare for this one.