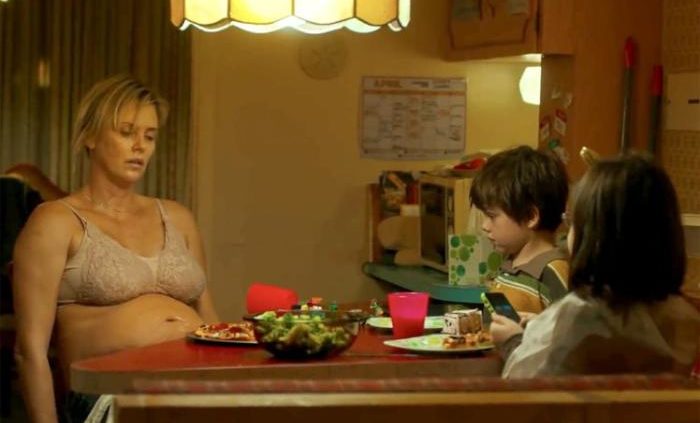 Charlize Theron could have had a comfortable career playing beautiful, graceful, and sexy women. She never would have had to stretch or play anything other than herself and people would have paid her to do it because lots of people would have liked to go see her be beautiful, sexy and graceful. And then she ruined all that, announcing in no uncertain terms by her Academy-Award-wining turn in Monsterthat what she really wanted to do was act. And she subsequently took on more tough roles in North Country(2005), Young Adult (2011),Mad Max:Fury Road(2015), and now Marlo, a mother on the edge of a nervous breakdown, in Jason Reitman’s new film Tully, a role that Theron reportedly put on fifty pounds to play. That’s some hard dedication.

Reitman and screenwriter Diablo Cody have collaborated before, on Juno(2007), for which Cody won the Oscar, and also on Young Adultwith Theron. Juno was a cynically comic look at teenage pregnancy, in which the young mother-to-be decides to have the baby, but struggles with the decision of giving the child up for adoption. In Tully, Reitman and Cody have taken another swing at motherhood, this one even darker and even more unsentimental. Theron’s character Marlo is a mother in her forties, who already has two children and, five years after her last child, finds herself pregnant again with a child who was obviously not planned. Post-partum depression is mild compared to what Marlo experiences.

Marlo’s other two children are a normal if precocious eight-year old daughter Sarah (Lia Frankland) and a five-year old son named Noah (Asher Miles Fallica) who appears to be somewhere on the autism spectrum and who is so disruptive in class—with behavior that his principal calls “quirky” (which, as Marlo says “makes him sound like a ukulele”)—that he is being dismissed from his school to find an education elsewhere. Marlo’s husband, Drew, is played by Ron Livingston, who seems to be just about as excited about his role as husband and father as he was about his job in Office Space. As Marlo describes his evening ritual, Drew“Goes upstairs, puts on a headset, kills zombies, and passes out.” It’s hard to blame Marlo if she is not particularly excited about the birth of her third child.

Marlo does have a brother named Craig (Mark Duplass from Zero Dark Thirtyand TV’s TheLeague), who seems to have more money than he knows what to do with and who is something of a jerk and married to the Perfect Mother (something that’s a lot easier to be with a lot of money) Elyse (Elaine Tan of TV’s Hand of God). Craig does seem to realize what a difficult time Marlo is going to have with another baby, and offers to pay for a Night Nanny to help her out. She initially refuses, not wanting some stranger to come into her house every night, but eventually, after many a sleepless night of baby wrangling (during which Drew plays video games and then sleeps soundly through), Marlo relents and calls in the cavalry. Tully (Mackenzie Davis of The Martianand Blade Runner 2049), a nanny in her early twenties who claims to be “older than I look” arrives, Mary Poppins-like, on Marlo’s doorstep. She is fresh, funny, energetic, and caring—in short everything Marlo needs, and furthermore promises Marlo “I’m here to take care of you.” When Marlo objects that it’s the baby that needs caring for, Tully assures her “Right now, you pretty much arethe baby.”

It doesn’t take long for things to take a sharp turn upward. Not only does Tully take loving care of the new baby, Mia, she even cleans and bakes during the night, and Marlo is soon perked up after nights of glorious rest. Only there are some strange things that begin to surface. Marlo and Tully seem to be getting uncomfortably close. And how does Drew not care enough to even come downstairs to meet the woman who is taking care of his new baby? Turns out things are not as harmonious as they seem, and are building toward a pretty surprising denouement.

Motherhood is something of a sacred cow in the media, a concept so idealized that even to suggest that sometimes the responsibilities can be overwhelming, and that mothers sometimes need relief from their children, is blasphemous to certain segments of society. Those same segments are quick to blame and shame mothers who fail to live up to the perfect ideal. Reitman’s film tries to take a realistic and unsentimental look at the true everyday problems of mothering. And some people may not like it for that reason. But this sort of objection seems unrealistic. Our society glorifies war too, but does that mean the film industry should not make war movies that depict the gruesome realities of the battlefield?

OK, so raising children isn’t a war. Though sometimes it may seem like it. But there are also people on the other side of the spectrum who have criticized the film, even called for a boycott of it, because of its failure to go far enough in clarifying the actual mental difficulties of its main character. Maternal mental health advocates are calling the film irresponsible and misleading, reacting mainly to a surprising twist near the end of the film that I won’t reveal because it’s too much of a spoiler. But according to Diana Spalding, a pediatric nurse and education editor for the online source Motherly,“The reason that people are so excited about ‘Tully’ is because they feel like it is the first time that true motherhood is being portrayed on the big screen — but this is not true motherhood…Motherhood is hard, yes, but it is not this. This is mental illness. Brushing aside her mental illness again refuses to give it the attention it deserves.” The illness depicted is, according to mental health professionals, not common post-partum depression but the rare condition of post-partum psychosis, a disease that can sometimes lead to the death of the child if unidentified.

It does seem misplaced, though, to blame the film for not naming what it presents. We don’t know what will happen to Marlo after the bizarre twist of the end. She is a fictional character, after all, but we can imagine that perhaps after the end of the film she will get the help she needs. But we do not have to worry that women seeing this film will think what ultimately happens to her is normal. They may in fact be curious enough to ask their doctors, or more likely Google, about this condition, and so the film may serve the useful function of raising awareness of the condition. In any case, the film is not an educational movie about post-partum psychosis, it’s a piece of art, and having a final scene in which a doctor explains to Marlo what her condition is and what should be done about it would not exactly be the most aesthetically pleasing way to end the movie.

I have seen a number of online complaints about the movie because it is billed as a comedy, but in fact is not even remotely that. There are a few funny lines (Craig and Elyse’s daughter is in a talent show. “What’s her talent?” Marlo asks. Elyse says “Pilates.”) But there is surely nothing amusing at all about post-partum psychosis. In some ways that makes this film almost more of a horror film than a comedy. It’s extremely well-acted, and Theron and Davis have a remarkable chemistry together, and the hapless Livingston ultimately evokes some sympathy from the audience by the end. But there are a number of things in the film that don’t quite ring true to me. Why would a school toss out a “quirky” child without referring him to another school that may be more equipped to handle an autistic child? Why would that school not diagnose his problem? Why would Marlo not be seeing her own doctor, and why wouldn’t her doctor recognize any danger signals? And really, how could any husband be that checked out from his newborn baby’s life? And why wouldn’t his wife call him on it? Now my own awesome wife says that no, the kid goes to a private school and he own experience working at a private school suggests that they could have done exactly what they did. Nor would Marlo necessarily be connecting with her doctor, especially if she didn’t think there was anything wrong with her. My wife also, less convincingly, argued that a lotof fathers are that checked out. Be that as it may, I’ll leave it to youhow believable you think the ending is. Personally, I found it a difficult stretch.

Still, chiefly on the basis of impressive work by Theron, I’m giving this one three Tennysons. It’s probably worth seeing for most folks.