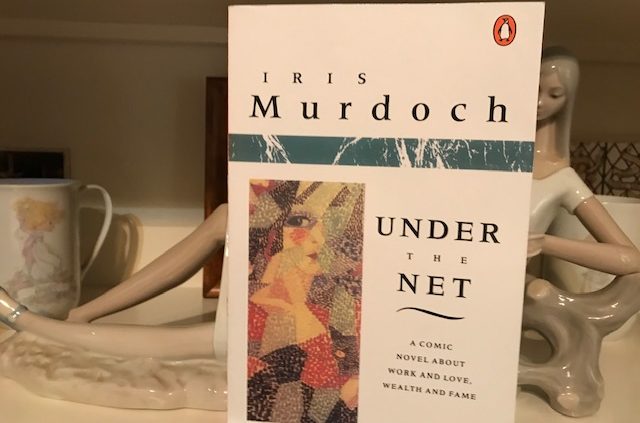 I’m definitely late to the party as an admirer of Iris Murdoch. I’d heard the name but her novels were always a bit off the radar for me and for what I was reading and studying at the time. But in my late-life mania to read important things that I’d missed out on when I was younger, I noted that the first of Murdoch’s 26 novels, Under the Net, was listed in Modern Library’s 1998 list of the greatest English-language Novels of the 20th Century, as well as Time magazine’s 2005 list of the best novels published in English since 1923; furthermore, in 2008 the London Times ranked Murdoch as no. 12 on its list of the “Fifty Greatest British Writers since 1945.” I broke down and bought a copy of Under the Net and gave it a read.

It is no surprise that Murdoch, who took a postgraduate degree in philosophy at Cambridge and later taught philosophy at Oxford, fills the novel with philosophical allusions, but not in a way that makes it difficult or tedious reading. What is surprising is how funny the novel is. I wasn’t quite ready for that.

It’s a picaresque novel in which the protagonist and narrator, the struggling young writer and consummate sponge Jake Donaghue and his faithful sidekick Finn, bounce from scene to scene in a series of almost manic adventures. These begin when Jake’s sometime-girlfriend Madge kicks him and Finn out of the flat they’ve been living in rent-free with her for eighteen months. She’s decided to move on and wants her new boyfriend, the rich bookie Sammy Starfield, to move in. Jake parks his suitcase and his manuscripts with his friend Mrs. Tinckham in her corner shop, though he realizes he’s left his most recent manuscript—a translation of the latest novel from the French hack writer Jean-Pierre Breteuil (whom he’s been making a career out of translating) and tries to figure out who he can hit on to give him free lodgings. He and Finn decide to try their friend Dave Gellman, whom, we are told, is a philosopher—“not the kind that tells you about your horoscope and the number of the beast, but a real one like Kant and Plato, so of course he has no money.”

Dave is in the middle of a political discussion with a well-known socialist politician named Lefty Todd, and can’t really help them out. But he tells Jake he ought to look up Anna Quentin, a singer he was once in love with (and probably still is). Jake has had no contact with Anna for years, but after some effort finds her running an enterprise called the “Riverside Miming Theatre.” She seems happy to see him again, but she can’t help him, and she tells him he ought to find her sister Sadie, who has become a famous film star and is actually looking for someone to house-sit for her.

Jake finds Sadie at her hairdresser, where she is happy to let him stay in her apartment and to help her ward off the unwelcome advances of her boss, the former fireworks manufacturer and now movie studio owner Hugo Belfounder. That name sends Jake’s mind whirling back in time: He had met Hugo years earlier, when both men were voluntary patients in a medical experiment with a group of scientists trying to cure the common cold. The two had become fast friends, and had spent day after day in philosophical discussions which so fascinated Jake that he had turned those conversations into his first novel The Silencer, whose theme is the impossibility of expressing real truth in language: “The whole language,” according to Hugo, “is a machine for making falsehoods.”

Trouble is, Jake never did tell Hugo that his philosophy, or at least Jake’s understanding of it, was the subject of his book. Too ashamed to admit this to Hugo afterward, Jake had unceremoniously cut his friend out of his life, and never contacted Hugo again. The book, it turned out, was a resounding flop, but still—how can he face up to Hugo now? And when, secured in Sadie’s apartment, he takes a phone call from Hugo and reveals his identity to him, his former friend hangs up on him.

Yet soon enough Jake overhears a conversation between Sadie and super-bookie Sammy, in which he discovers that Madge had apparently given Sammy the manuscript of his translation of Breteuil’s recent potboiler, and the two are planning to double-cross Hugo and cut Jake out of the picture as well by proposing the treatment as a film project to a visiting Hollywood bigwig. Jake is furious about being cheated this way, and also plans to reveal the plot to Hugo.

At this point things get even more frenzied, and a string of events including a midnight swim in the Thames, the kidnapping of an Alsatian (German Shepherd) Rin-Tin-Tin-like film star, a riot on a film set, Jake’s taking an actual job as a hospital orderly, a side trip to Paris on Bastille Day and the shock of discovering who just won the prestigious Prix Goncourt unfolds. I won’t give any big spoilers here, but suffice it to say the plot is wildly entertaining.

But behind that plot lurks the philosopher Murdoch. An important question, implied by the title, is what exactly this net is that the title suggests we are going under. Several critics have pointed out that the title actually alludes to a passage in Ludwig Wittgenstein’s Tractatus (6, 341), in which he uses the image of a net as a metaphor for a theory or web of discourse that may describe the universe, but also stands between us and the specifics of that universe. Murdoch alludes to the image in one of the passages from Jake’s book, The Silencer: “All theorizing is flight. We must be ruled by the situation itself and this is unutterably particular here. Indeed it is something to which we can never get close enough, however hard we may try as it were to crawl under the net.”

And much of the book is about Jake’s theorizing. The book moves from one crazy incident to another, linked by Jake’s theorizing about what is going on. And his theories are inevitably mistaken—the words by which he attempts to analyze his experience, and those theories, are what Hugo said language was: a machine for making falsehoods. Jake thinks Anna loves him. He thinks Hugo is angry with him. He thinks Finn will never leave him. He thinks Hugo loves Anna. He’s wrong about pretty much all of it.

And yet Jake is a writer, or wants to be. How do you use language effectively if it’s a net of misleading or just plain false assertions that cannot fail to corrupt truth? Jake is tempted by his film contacts to write for the movies. He’s tempted by socialist Lefty Todd to write for the political left. In the first he would be using language to create dream landscapes. In the second he would be using it to twist truth to a political agenda. In both cases, there is no getting under the net. Anna starts a Mime theater, where without language perhaps one can more truthfully communicate. Is this possible in a novel? What if the novel is like a mime—all action without interpretation, or with interpretation that only reveals its own falsehood, and therefore the demonstration of language’s corruption of truth? Then what you have is…this novel.

Four Shakespeares for this one.

Simon Armitage’s “The Patriarchs: An Elegy”
Scroll to top