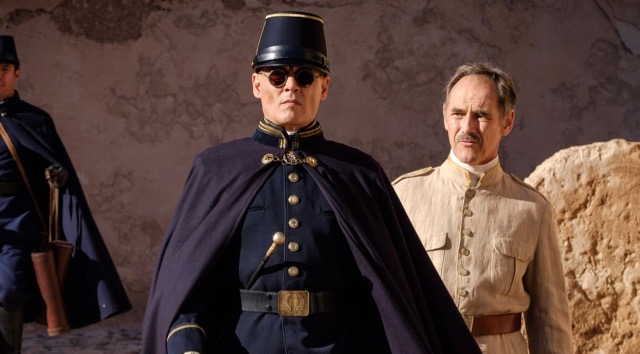 Waiting for the Barbarians
Ciro Guerra (2020)

In the classic 1967 Paul Newman vehicle Cool Hand Luke, the most iconic figure is Boss Godfrey, the “walking boss,” the silent guard who watches the road crew of prisoners armed with a rifle, and so effectively hidden behind his reflecting sunglasses that he becomes known as “the man with no eyes.” Played by Morgan Woodward, Boss Godfrey personifies the brutal penal system that keeps the prison’s convicts subdued in fear, and brings down irresistible torture and pain on inmates, particularly Luke, who show any sign of individual humanity. In the film, he seems an image of an indifferent, unapproachable and arbitrarily cruel god, in control of a wasteland of a world that Luke has determined, Christ-like, to redeem. As a comment on the deepening resistance to the Vietnam War at the time, the man with no eyes seemed the embodiment of Western Imperialism imposing its will on the world’s hapless “others.”

In Ciro Guerra’s new film version of Nobel Laureate J.M. Coetzee’s literary fable Waiting for the Barbarians, Johnny Depp as Colonel Joll takes a page from Boss Godfrey as he saunters into a nameless fort on the frontier of an unnamed empire wearing small round sunglasses, carrying with him all the compelling power of brutal imperialism to bring home to the native barbarian “others” of the region just who is in control here.

The film is Guerra’s first English-language feature. The Colombian director was nominated for an Academy Award for “Best Foreign Film” for his 2015 movie Embrace of the Serpent—a story focused on the sufferings of the indigenous peoples of the Amazon at the hands of colonialists. Cinematographer Chris Menges, who won Oscars for his work on The Mission and The Killing Fields, has a similar pedigree in terms of his association with anti-colonialist films. Their previous efforts are certainly an apt prelude to their current work, the dramatization of Coetzee’s 1980 parable that, at the time, was a thinly-veiled protest against apartheid South Africa, and a condemnation of European imperialism in Coetzee’s native land. Forty years later, the film appears at a moment in time when Black Lives Matter protests have sparked a worldwide awakening to the evils of the White privilege that is the legacy of centuries of colonialism.

Coetzee himself penned the script—his first venture into screenplay writing. So it cannot be said that the film adaptation takes liberties with the book’s plot with which the author would not approve. The novel, in fact, is told in first person from the point of view of “the Magistrate,” the protagonist played in the film by Oscar-, Tony-, and BAFTA-winner Mark Rylance (Bridge of Spies, Wolf Hall). The film necessarily loses much of the internal monologue that characterizes the book, and we have to determine the Magistrate’s motives and reactions the same way we do the other characters, by their words and actions.

In Coetzee’s parable, the story is set in an imperial frontier post in an unnamed country far from the capitol of the unnamed empire. The author intended the fable to be universally applicable to any empire in any frontier at any time. When I read the book, I imagined an outpost of Imperial Rome somewhere in modern-day Germany, a bulwark against Teutonic “barbarians”—Visigoths, Ostrogoths–or Huns maybe. The film opens in a desert, in a fort manned by soldiers in buff-colored uniforms resembling troops of the French Foreign Legion. You could be watching a remake of that imperialist classic, Beau Geste. These scenes were filmed in Morocco, and Menges’ desert vistas are beautiful and stark. But to make sure we don’t get too comfortable in pinning down time and place, the indigenous people of the region are all played by Mongolian actors speaking their own language. The Magistrate, who has been at this frontier post for many years, seems to be on relatively peaceful terms with the locals, speaks their language, understands their written messages, even collects archeological finds from the region.

Into this comfortable setting barges Colonel Joll and his storm troopers, uniformed in black liveries reminiscent of SS uniforms. Joll and his chief lieutenant Mandel (Robert Pattinson of The Lighthouse) are the only major characters in the film who are named (“joll” is Afrikaans slang for playing or having fun; Mandel sounds remarkably like anti-apartheid hero Nelson Mandella—perhaps the only names that can exist in this fable are ironic ones?).

Or perhaps Joll’s “fun” is sadism. Little more than a one dimensional villain (which is I suppose admissible in a fable), Joll is essentially the personification of imperialism. He has come to ferret out rebellion among the indigenous peoples, and by god he’s going to find it. And his methods of interrogation are simple and brutal. As he explains to the Magistrate: “First lies. Then pressure. Then more lies, then more pressure. Then more lies, more pressure, and then comes the break. After the break, more pressure. And then at last, the truth.” “Pressure” is of course the euphemism for “torture,” euphemism being the language of choice for imperial powers, so that, for example, “mass murder of millions” becomes “final solution.” And in case the Magistrate’s benevolent administration had lulled us into a false sense of peace, Joll’s tactics underscore the basic truth of colonialism: Pious platitudes to the contrary, it’s not about “civilizing” or “sharing,” it’s about power, and its concomitant exploitation. Period. And by the time Joll is done with his interrogations, he has fomented the rebellion he is looking for.

The Magistrate is a far more complex character. Once Joll has finished his inquisition and is on his way back to the capital, the Magistrate adopts one of Joll’s victims—a young woman whose father has not survived Joll’s torture, and whose feet have been broken and her eyes blinded during her own interrogation. This woman, known only as “the Girl” (Gana Bayarsaikhan from Wonder Woman), he brings to live in his apartments in the fortress, sparking a good deal of gossip around the outpost. And though the attraction is unmistakably sexual in the novel, here it is more ambiguous. We see the Magistrate wash her feet and care for her injured body with a Christlike tenderness. He asks whether she wants to stay with him, and when she insists she wants to go back to her family, he leads a troop of his guards into the mountains on a dangerous mission to return her to her own people. On his return, he finds that Joll’s men have taken over the fort in his absence, and Mandel, Joll’s sadistic clone, is in charge while Joll is leading troops to make war on the natives. The Magistrate is arrested for deserting his post and consorting with the enemy, and he witnesses Mandel’s cruelties to prisoners as well as his stirring up of the colonists in the fort to participate in the frenzied tormenting of helpless captives, ultimately subjecting himself to Mandel’s tortures, even to the point of a symbolic crucifixion.

But for all this, the Magistrate is truly no Christ-figure, except perhaps in his own mind. Despite his opposition to the worst abuses of the colonial empire, he is still a representative of that government. He has enjoyed his own comfortable life for decades as a part of that system. And if Joll is a personification of the empire, the Girl seems a personification of the indigenous population, whom the Magistrate wants to love him but who only want to be out of his hands. His rule may be benevolent, but it is a benevolent dictatorship, and would not exist without the threat of Joll and his ilk behind it.

I won’t talk about how the film ends to avoid spoiler activity, but suffice it to say that by the time the end comes, we are pretty certain who the barbarians actually are. As Walt Kelly’s Pogo famously said, “We have met the enemy, and he is us.”

Everyone will not love this film. Coetzee’s cerebral narrative does not translate readily into the medium of film, and many will find the movie slow going, especially in the beginning. Depp is memorably menacing in his role, and Rylance is brilliant as the sympathetic and ineffectual Magistrate. And Menges’ camera work is starkly beautiful—particularly striking is his forebodingly chilling final shot. If you aren’t expecting continuous action and superhero powers, here’s a movie that will make you think. Three Tennysons for this one.

W.S. Merwin’s “Plea for a Captive”
Scroll to top