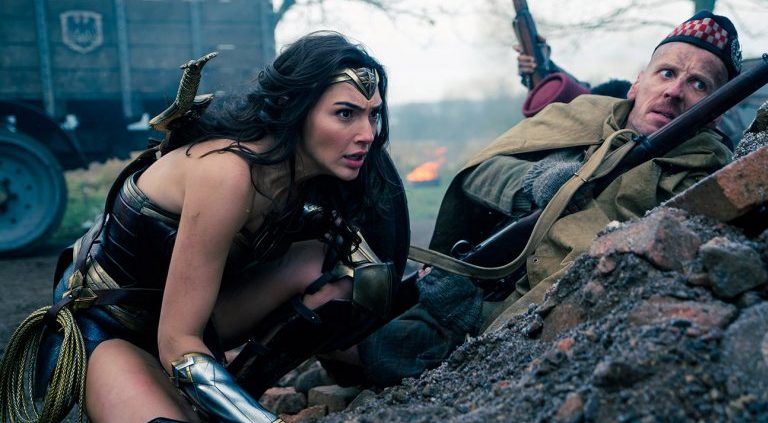 Last week on Fox News, commentator Neil Cavuto and guest Dion Baia spent some time on the significant question of Wonder Woman’s costume in the new film by Patty Jenkins, claiming that the redesigned red, blue, and yellow costume is evidence that, unlike the traditional red, white and blue costume—with the blue field-of-stars shorts or bikini-bottoms traditionally worn by the comic book character—is evidence that the film is an example of Hollywood’s “money trumps patriotism” attitude. Of course, that didn’t stop people from flocking to the film in droves: It grossed $100.5 million in the United States and Canada this weekend, giving it the most successful opening weekend ever for a film made by a female director. And just as interesting, The Hollywood Reporter noted that 52 percent of the audiences for the film’s opening weekend were girls or women, whereas previous superhero films from the Marvel or DC universes typically have drawn audiences with 6o percent or more male majorities.

Of course, putting Wonder Woman in a thinly-disguised American flag would have made absolutely no sense in the context of this film, which the talking Fox heads had obviously not seen before making their comments. Wonder Woman, born Diana, Princess of the Amazons, is the daughter of the Amazonian queen Hippolyta, born and raised on the isolated island of Themyscira—a Paradise island inhabited solely by women, and deliberately hidden away from Ares, the Greek god of war, whom the Amazons have been created to oppose. A chance incursion brings the First World War onto Amazonian soil, and Diana, believing the “war to end all wars” to be the work of Ares himself, leaves her Paradise island to travel to London, then to Flanders Fields to the front lines in Belgium. And as we know from her previous brief appearance in last year’s Batman v. Superman: Dawn of Justice, in the present time, Diana Prince, a.k.a. Wonder Woman, works as an antiquities dealer at the Louvre in Paris. So Fox news…where in this story of an ancient Greek mythical warrior woman turned loose in a war in Europe and ending up in disguise as a French museum employee does Wonder Woman’s Americanism fit in?

To be fair, the original Wonder Woman premiered in DC comics in October 1941, getting her own publication in 1942, in which as secret identity Diana Prince she worked as an American Army nurse and later an Air Force secretary, and, as Wonder Woman, fought against the Axis powers. Her red white and blue costume had a clear symbolism, even if the field-of-stars shorts were not exactly fashion-conscious. But Wonder Woman has been through several reboots over the years, and the character in this movie is light years away from the original conception. Played by Israeli actress Gal Gadot (best-known for appearances in the Fast and Furious films) this Wonder Woman is an innocent eye coming from outside to view civilization’s darkest hour and to judge the human race essentially as an outsider.

Other than the initial contribution, 2013’s Man of Steel, the films in the DC Extended Universe project (until now) have not been critical successes, partly because of their dour, unstintingly somber tone. This tone is to some extent the product of a world view that sees moral ambiguity everywhere. The selection of World War I, with its tangled motives, its introduction of chemical weapons, tanks, aerial bombardments and modern technological warfare, and unheard of numbers of casualties, was the logical selection for a film with this world view, rather than “the good war,” World War II, so much more easily seen as a conflict of good vs. evil. Thus Wonder Woman continues this ambiguous world view: Diana believes that she must destroy Ares, god of war, and leaves her Paradise island on a mission of good vs. evil, but finds that the world outside is much more complex, and that humans themselves can be evil without the help of any supernatural being—but finds that they are also capable of profound acts of goodness.

But what makes Wonder Woman different from, and superior to, the latest DC Extended Universe films is a lighter touch at times, which allows Diana’s human side to emerge. Much of this comes in her relationship with Steve Trevor (Chris Pine of Star Trek), an American spy who crash lands in the sea off Diana’s island, not from the Starship Enterprise but from a WWI biplane in which he is fleeing a German war ship. The princess, who has been learning Amazon fighting techniques from her fierce aunt, the general Antiope (Robin Wright, as implacable a force here as she is as Claire Underwood in House of Cards), winds up saving Steve from drowning, but not before the Germans pursue them onto the island and kill a number of Diana’s Amazonian sisters before being repelled. Later coming upon a bathing Trevor, Diana, who up to this point has never seen a man, wonders whether Steve is a typical specimen of human masculinity. He suggests that he is “above average.”

The film then becomes an archetypal initiation story, in which Diana, in quest of the wicked Ares, whom she has been raised specifically to oppose, leaves her protected home and loses her youthful innocence as she experiences the real human world. Brought to London where Steve must report to his British superiors (it’s never explained why as an American he is assigned to a British commander), Diana’s innocent observations about what she sees tend to be amusingly suggestive of a kind of superior wisdom: She sees a corset in a shop and wonders if this is what passes for women’s armor in this world. When told about the duties of a secretary, she remarks that in her country such people are called “slaves.” It is at moments like these that the film is at its best.

In presenting Diana as a superhero (superheroine?), the film includes one inspired battle scene in which the princess crosses no-man’s land between trenches on the western front, clearing out the German trenches and liberating a small village where trapped civilians have been starving. However, the film does ultimately degenerate into the kind of battle scenes that form the greater portion of most superhero movies, and that are as interchangeable as tube socks. In the process, Diana learns much about the degeneracy, vanity and cruelty of the human race, but also learns to appreciate what is good about humans, particularly the virtues of love, and she displays an “emotional intelligence” that male superheroes seldom manifest.

The film’s greatest asset is its star: Gadot is beautiful and formidable, but passionate and sympathetic like no other DC protagonist before her. This Gadot was worth waiting for. Pine is likeable and believable as the American spy—indeed, the lone American is ultimately the noblest of the film’s male characters (a rather forceful contradiction of Fox news’ contention that the film is anti-American). Elena Anaya, as a German scientist trying to develop a deadly new chemical weapon that will propel Germany to a final victory, is a tantalizing figure but one that the film fails to develop enough to capitalize on. Danny Huston as the evil commander Ludendorff isn’t much more than a stereotype, though David Thewlis (Vargo of TV’s Fargo) is appropriately smarmy as a not-completely-trustworthy British politician.

But perhaps the greatest triumph of this film is finally, that Hollywood rarity, a woman director—and Jenkins has not made a feature film since her acclaimed Monster in 2003—has successfully delivered a big-budget blockbuster action movie, and one that, unlike most superhero films, has a heart. One caveat, though: like almost all of these blockbuster movies, it’s really not worth seeing in 3D. Don’t waste the money.

Three Tennysons and half a Shakespeare for this one. Miss it at your peril.

Chaucer’s Prioress, from “The General Prologue”
Scroll to top