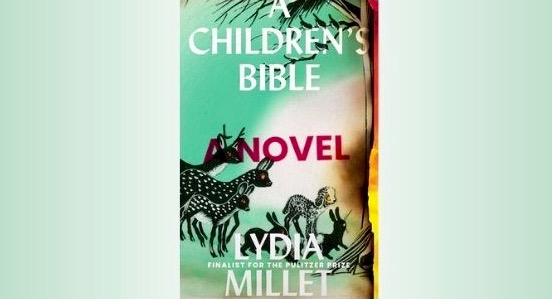 It’s not unusual for a literary text on any level to depict parents as complete idiots whom their children are forced to save through their superior savvy and common sense, and replace those in power with a “new society.” This is almost the universal plot of comedy, from Menander and Plautus through Shakespeare (Merchant ofVenice?) to Back to the Future. But when the older generation’s ignorance or blindness involves denial, self-delusion, and mendacity, we’re no longer in the realm of comedy. We’re beyond even tragedy, which charts the fall of the individual. We’re in the Waste Land.

Lydia Millet’s A Children’s Bible takes us to that land. Named one of the best books of 2020 by the New York Times, the Washington Post, the BBC, NPR, and Time magazine, Millet’s novel begins like one of those comedies I mentioned: We’re in the environs of a large 19th century mansion, rented for the summer by several families with their children, ranging in age from seven or eight to seventeen. The parents spend most of their time drinking and lounging in the house, while the children form their own little world apart from the parents and trying not even to acknowledge them—they even engage in a game in which they try to determine which parents belong to which kid. The parents are a huge embarrassment: “As the evenings wore on, some parents got it into their heads to dance,” the narrator laments. It’s a “Sad spectacle . . . . They were a cautionary tale.”

The book begins with such simple language that it seems itself to be intended for children:

“Once we lived in a summer country. In the woods there were tree houses, and on the lake there were boats.”

But it quickly becomes obvious that this is no nursery tale, and we are led to expect that at least a few of the teenagers will be hooking up in this loose environment.

The narrator and protagonist of the novel, a teenaged girl named Evie, has a younger brother named Jack who is obsessed with studying animals and who receives from one of the less hedonistic mothers a Children’s Bible, which (unfamiliar with any organized religious tradition) he reads with some interest, trying to figure out the point of these stories. Meanwhile the children, eager to put some distance between themselves and the pointless fecklessness with which the parents squander their days, row some boats a few miles downstream to a beach where they intend to camp out for the night. On the beach they meet some fellow teenagers whose parents are parked offshore in yachts. These one-percenters bring in the first real hint of truly dark clouds on the horizon (at least metaphorically) when they discuss the well-stocked bunkers their parents have outfitted, just in case they need to survive a coming environmental apocalypse.

When actual dark clouds move toward shore from the ocean, the kids hurry back to their parents in the great house, which is battered by a violent hurricane. The electricity goes out, flood waters surround the property, but the parents, unconcerned that anything bad is really going to happen, spend the night doing drugs and swapping spouses. The kids, giving up on their parents completely, decide to take matters into their own hands. They take one of the roomier cars and set off in an attempt to reach the ten-room house one of their families owns in New York’s Westchester county. But the storm has wreaked havoc all the way to New York and Boston, and the children, unable to make it further, wind up on a farm in Pennsylvania, near Bethlehem.

If that particular detail isn’t enough to clue you in, let me belabor the obvious. This is a novel full of biblical allusions, including, of course, an Eve who is forced to leave her Eden; a Noah in the form of Jack, who traps animals in the woods to save them from the flood; a Moses figure who leads the children to a promised land, goes up a hill to use his cell phone to call the absentee owner of that promised land and comes down with a set of “rules”; a Cain and Abel pair; a birth in a barn; a crucifixion; and a host of other examples, not the least of which is the disaster itself, framed as the beginning of a climate-change-induced apocalypse. And it is Jack, reading his Children’s Bible, who sees a number of parallels. Jack, with no prior religious education, tries to make sense of what he is reading in the light of what he is experiencing, and puts forward a new interpretation of the scriptures: When the authors of the book talk about “God,” Jack decides, it’s actually a “code word” for nature. “Jesus,” moreover, is the authors’ code for science:

As for the Holy Spirit, Jack finally reveals in the last pages of the book that this refers to the things we make—technology, perhaps, or one might say art (this may owe something to Dante, who called Nature the child of God, and Art the child of Nature—but that’s a whole new essay). This may be Millet’s subtle condemnation of contemporary “literary” novelists (as opposed to science fiction writers, perhaps) who have failed to address the climate crisis—the most important problem of our age because of its existential implications—and have, like the parents in this novel, brushed it off as something human ingenuity would solve or, worse, been led politicians and their sycophantic religious followers who advise us not to “believe” in science.

No such charge could be made against Millet’s fiction. She holds a Master’s degree in environmental policy from the Nicholas School of the Environment at Duke University and spent two years working for the Natural Resources Defense Council before taking a job as editor and staff writer for the Center for Biological Diversity, where she has been since 1999. Much of her fiction has focused on human beings and their shaky relationship with their environment: Her story collection Love in Infant Monkeys, a collection of comic vignettes featuring celebrities’ encounters with other species, was a finalist for the 2010 Pulitzer Prize. Her 2012 novel Magnificence showcases a taxidermy museum uncomfortably comprising extinct animals. But nowhere before has she so blatantly featured the coming mass extinction, an extinction possibly including the species that caused it: humankind.

This is what the children in the book get and the parents do not. Early on Eve says of the definitively un-woke parents:

“They aimed their conversation like a dull gray beam . . . What they said was so boring it filled us with frustration, and after more minutes, rage. Didn’t they know there were urgent subjects? Questions that needed to be asked?”

Chief among those questions is what to do about the climate crisis, which the parents and their government representatives have ignored and still do nothing, even at this late date. But the children know. They are embodied in Greta Thunberg chastising the adult leaders of the world for ignoring the real problem. At one point two of the book’s yacht kids, talking about their end-of-the-world bunkers, mention what would have been the parents’ old bugaboo, nuclear holocaust:

“The nuclear threat. So quaint.”

“The climate deal makes nukes look kind of sweet. Like being scared of cannons.”

The biblical allusions to Jack’s Children’s Bible are, like the sense of tragedy, meaningless here, since to have any meaning we must ultimately be in a world made meaningful by human beings’ acceptance of God’s biblical injunction to act as stewards of the world. To do that, as Jack insists, we would have to believe in science. Despite its title, the book is not intended for children. Like Lord of the Flies, to which it has been compared, it’s aimed at parents. The kids already know. Maybe, just maybe it’s not too late for the parents.