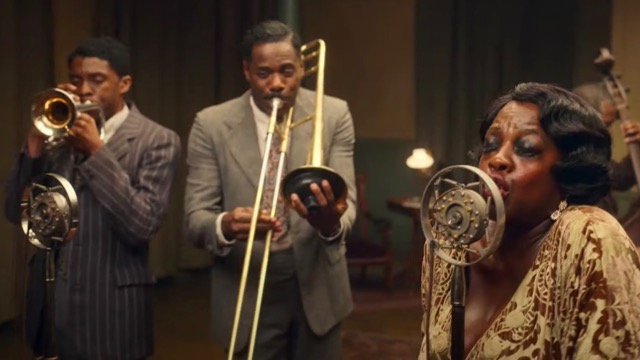 He Said: August Wilson’s “Pittsburgh Cycle,” sometimes called the “American Cycle,” is one of the great achievements of American theater. A series of ten plays, each set in a different decade of the 20th century, is intended to chronicle the African American experience over the course of the last century. All but one of these dramas was nominated for the Tony Award for “Best Play” the year it premiered on Broadway, and that neglected play, Jitney, ended up winning the Tony when it was revived in 2017. Fences, the other play to win the Best Play Tony, also received the Pulitzer Prize in 1985, and Wilson’s The Piano Lesson won the Pulitzer as well in 1987. Ma Rainey’s Black Bottom was the first of Wilson’s plays to be nominated for the Tony, and is the second of the Pittsburgh Cycle (after 2016’s Fences) to be made into a major film through the efforts of Denzel Washington, who has expressed his intent to see all of the cycle on film.

Ma Rainey is the cycle play set in the 1920s. Specifically, it takes place during a recording session in a Chicago studio in 1927 (the only play of the cycle not set in Pittsburgh), and focuses on Ma Rainey, the legendary “Mother of the Blues,” and her thorny relationship with her white manager and producer. Determined to control her own music, the crotchety and domineering Rainey cows everyone and bends them to her will—everyone except the young cornet player in her band, Levee, who has his own ideas about how to perform “Ma Rainey’s Black Bottom,” and is composing his own songs, which he hopes to sell to Ma’s producer. Meanwhile, he has his eye on Ma’s girlfriend Dussie Mae, and the other three band members, grizzled veterans all, poke fun at Levee’s ambitions.

Viola Davis is glorious as the formidable Ma Rainey. An Oscar winner for her role in Wilson’s Fences, she’s probably a lock for another nomination with this performance. But the film really belongs to Chadwick Boseman as Levee. In his final role before his tragic premature death from cancer earlier this year, Boseman lights up the screen with brazen charisma, youthful charm, and raw talent. Having already given an iconic performance earlier in 2020 in Spike Lee’s Da Five Bloods, Boseman has to be the sentimental favorite for a posthumous Oscar this year.

She Said: I didn’t realize the Pittsburgh Cycle included a play for each decade. My sequential and structured psyche just LOVES that.

While I respect and admire August Wilson and his work, I didn’t have a lot of affection for Fences when we saw it in the theater (remember movie theaters? Sigh…). I think it is because I found the style of discourse and dialogue distracting. Wilson has a definite style, and his characters “hold forth” a great deal, which for me creates distance between me and their individual humanity. That connection is what I love about movies, so it’s harder for me to engage with material that has such a strong stamp by its creator—which is why I often don’t love Aaron Sorkin’s work: Every character sounds like the same person, just with different viewpoints and biographical details.

But I did find this movie engaging because the performances were so stellar, just as I did for Fences. I can’t remember anyone Viola Davis was even in a scene with because when she was on screen, my eyes were riveted on her. Wow! So much energy, perfectly unleashed and restrained in turn. Boseman also lit every shot he was in from within with the verve and ambition of his character. I did respond to the conflict in this movie between an older generation with its experience and accomplishments and the young crew with its confidence and accomplishments ahead.

He Said: Do you think your negative reaction to the “holding forth” of the characters might have something to do with the difficulties of adapting for the screen a script intended for the stage? The film is certainly “talkier” than the conventional Hollywood film—and, though there are attempts to set a few scenes out on the streets of Chicago, the setting is essentially all in the recording studio, often in the band’s claustrophobic rehearsal space. The fact is that the director of the film, George C Wolfe, is a highly successful Broadway director, having won a Tony for directing the musical Jelly’s Last Jam (about jazz musician Jelly Roll Morton) and moving on the following year to direct Tony Kushner’s Angels in America: Milennium Approaches, for which he won another Tony in 1993. He directed the second part of Kushner’s classic, then directed Patrick Stewart in his famous production of The Tempest, and won another Tony for directing Bring in Da Noise, Bring in Da Funk in 1996. This is an incredible resume, but doesn’t involve a lot of film work.

Also, the screenplay adaptation was done by veteran stage and screen actor Ruben Santiago-Hudson, who appeared under Wolfe’s direction in Jelly’s Last Jam on Broadway, and won a Tony for his role in Wilson’s Seven Guitars in 1996. Santiago-Hudson’s writing credits are limited to his own play, Lackawanna Blues, which he also adapted for the screen in 2006. The point is both the director and screenwriter for this movie are coming from background in the “legitimate theater.” Is the film more stagey than screeny?

She Said: I don’t know about it being the problem with stage-to-screen adaptations. I loved Carnage, which was based on the Yasmina Reza play. I thought Ma Rainey was filmed really beautifully; the sets were lush and enveloping, so it wasn’t that I felt I was watching a play that was filmed. I think the way Wilson has characters talk to each other in lengthier speeches isn’t personally super enjoyable to me, but beyond my own idiosyncrasies, I found nothing to fault in this film. Personally, I think I’d enjoy the cycle of plays more if I could view them in chronological order. And that’s another idiosyncrasy of being She Said.

He Said: Well, of course they weren’t written in chronological order, and each does stand by itself, but I see your point. Anyway, overall, I was strongly moved by his film, especially because of the power of the performances, and in that light I want to mention one more performance—that of venerable character actor Glynn Thurman as Toledo, the band’s oldest member. Recently seen as Doctor Senator in the 2020 iteration of TV’s Fargo, Thurman plays a similar role here as the voice of wisdom, experience, and gentle stoicism, a kind of foil or mocking counterpart to Boseman’s adrenalin-charged aggressiveness. The sudden and shocking climax of the film involving him and Boseman is foreshadowed but still manages to be stunning. In the end, I’m giving this film four Hitchcocks.

She Said: I won’t fight you on this. The movie is an excellent adaptation, I am sure, and it is very, very good at what it’s good for.

This Week’s We Watched It and You Should Too:
She Said: Unforgotten (series)

Hot Take: I am gobbling up this British crime drama that I’m streaming on Prime via an add-on for British shows. The first season aired in 2015 on ITV and the series stars Nicola Walker and Sanjeev Bhaskar as London detectives solving cold cases when the bodies are suddenly found. The emotional pain is almost unbearable as the lives of the people involved in one way or another is explored as the police close in on the killer decades later. But it’s lovely to see police force in which the boss praises her staff and shows compassion for those around her.

A Children’s Bible
Scroll to top