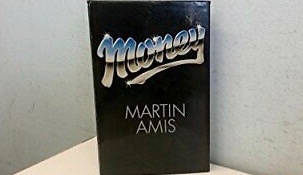 Martin Amis, son of another acclaimed British novelist, Kingsley Amis (LuckyJim), is, I’m quite certain, better known in England than in the United States, having been ranked as  No. 19 on the London Times’ famous 2008 list of the “50 Greatest British Writers Since 1945” (his dad came in at No. 9). But this particular novel, Money: A Suicide Note, made enough of a splash in the States to have been named to Time magazine’s 2005 list of the “100 Best English-language novels published since 1923.” Since I have a secret goal of reading through all of those novels before I shuffle off this mortal coil, I picked this one up, not quite sure what I was going to get.

Amis himself has said that the book “is essentially a plotless novel. It is what I would call a voice novel,” adding that “If the voice doesn’t work you’re screwed.” I would take issue with his contention that the novel is plotless—episodic, yes, but there is a plot structure that I’ll get to later. As for the voice, the protagonist/narrator John Self, a director of commercials seeking to make his first feature film, has a voice as distinctive as Holden Caulfield, or Augie March, or Humbert Humbert, but a good deal less likeable—even than Humbert, and that’s going some. Nabokov and Bellow are two of Amis’s chief inspirations for the novel, along with Heller’s Catch-22 and that prototypical English novelist, Dickens.

The names in the novel are Dickensian. If you want a protagonist who’s a fat egoist addicted to excess, how can you give him a better name than “Self”? His money-grubbing unfaithful live-in girlfriend, Selina Street, seems one step above streetwalking, while his slick-talking producer is named Fielding Goodney, and he’s all about feeling good. And then there’s the venerable American actor booked to star in Self’s film, Lorne Guyland, a name that, if you happen to be British, you can’t pronounce without it sounding like the way certain New Yorkers pronounce “Long Island,” which is where the guy lives. Even Self’s car has an appropriate name: He drives a purple Fiasco.

In a nutshell, the book is Self’s confession of the ups and downs of his attempt to put together a film based on a story idea he has involving a father and son both romancing—to use a euphemism—the same young woman. The projected title of the film is Good Money, though that evolves instead into Bad Money as the project progresses. Self is a highly successful 35-year-old director of TV commercials for “smoking, drinking, junk food and nude magazines,” who spends most of the book wallowing in his own addictions to smoking, drinking, junk food and nude magazines, not to mention other forms of pornography. He also fills up his nights with drugs, gambling, hitting women, and obsessing about the getting and spending of money. He already has a lot of money, and there are a number of people who owe him money (none of whom ever repays him), but essentially he is a fat, overindulgent degenerate wanker who skates relatively unscathed through life because he has, you know it: money.

This is, of course, the ’80s, that decade of Ronald Reagan, of Margaret Thatcher, and of unbridled corporate greed, of Gordon Gekko’s iconic “Greed is Good” speech in Wall Street. Reviewers of Amis’s book have called it representative of the overriding spirit of its age, the kind of time capsule, perhaps that Bellow’s Augie March was to the ’50s, or Heller’s Catch-22 to the ’60s (despite its setting two decades earlier).

It’s when Self meets the American producer Goodney by chance on an airplane, the producer convinces him to meet with potential “big money” people to get the film financed, and then the idea for the film takes off. Self, himself half-British and half-American, shuffles back and forth between his home in London and his hedonistic home away from home in New York, meeting with the four principle stars of the film, each of whom is a pampered celebrity with a long list of demands that conflict with each other and with the projected details of the film. There is ageing star Lorne Guyland (supposedly based loosely on Kirk Douglas, as the entire book is inspired by Amis’s experiences as script writer for the ill-fated Douglas vehicle Saturn 3): Guyland wants to be able to beat up the younger guy in the film’s fight scene, and wants lots of nude sex scenes with both women. The young female lead, Butch Beausoleil, is a bit of a “dumb blonde” but not nearly as dumb as her young romantic co-star with the regrettable name of “Spunk” Davis (a name he sees no reason to change), who believes that “halibut” rhymes with “Malibu,” and as a born-again Christian won’t have sex on screen or play the drug dealer he’s cast as. And then there is big-name veteran actress Caduta Massi, who refuses any love scene with Guyland and wants at least five children in the film.

Meantime Self has to deal with harassing phone calls from “Frank the Phone,” who seems to be jealous of Self’s success and blames him for his own failure, and threatens to beat him up; and if that’s not enough, Self learns that his own father, Barry Self (who also owes him money) has a contract out on him to be beaten up. Things are not improved when the screenplay for Good Money (penned by a woman he tried to Harvey Goldstein) comes in and makes none of the actors happy. Self gets a London writer named, self-referentially enough, Martin Amis, whom he met in a pub, to rewrite the script, ultimately making everybody happy with scenes that Self plans to cut in the editing room.

You may wonder why any reader should care at all what happens to this fat hedonistic slob. Well, the fact is that Self is self-aware enough to engage in a deal of self-loathing, and is continually vowing to clean up his act—to quit smoking, to quit drinking, to quit his fast food and pornography addictions, to quit beating up women, again and again backsliding on his vows, though to his credit he does keep the one about hitting women except for one lapse, but it must be said he was mightily provoked. So at least he knows what a scum bag he is. What he never considers is dropping that dependence on money, the love of which is the root of all his evil.

For it isn’t true that Money is plotless. I won’t say anything specific that might act as a spoiler to anyone reading the novel, but The New York Times, in its review of the book, stated:

“The plot of Money is in a basic, grand tradition. A guy gets totalled.”

That grand tradition is the tradition of tragedy. If you remember from your Aristotle, the tragic hero is someone in some way superior to the average person (usually in power, status, or virtue, but in the case of John Self, in the possession of disposable wealth). He falls from this high position into ruin and/or death through some hamartia, variously interpreted as an “error of judgment” (Self errs by placing his trust in the wrong people—Goodney, Selina, his father Barry) or as a “tragic flaw” (Self’s hedonistic lifestyle). The hero suffers a shocking reversal or peripeteia, in a twist I certainly will not reveal here, and loses everything, but the suffering ends up having some kind of meaning, anagnorisis. In this case, it is Self’s realization after his fall: “With money, double-dazzle New York is a crystal conservatory. Take money away, and you’re naked and shielding your Johnson in a cataract of breaking glass.”

What keeps Money from being a true tragedy is the darkly comic, sardonic tone, similar to that of Catch-22, that permeates the book. True tragedy, born of an impulse to explain the presence of suffering in a moral universe, must presuppose a universe with meaning. But this world? At one point Self asks the rhetorical question “What is the point of me?” and here, as in much postmodern fiction, the point may be that there isn’t any point. This world is governed not by a god but by the blind force of capitalism, whose sole purpose is to make money by exploiting people’s basest natural impulses, hence the focus on alcohol, drugs, fast food, pornography. In a world that has no meaning but this, tragedy can’t exist. Only a regrettable fall off the money train. And that has no real effect beyond the Self.

This is a major novel. Four Shakespeares.