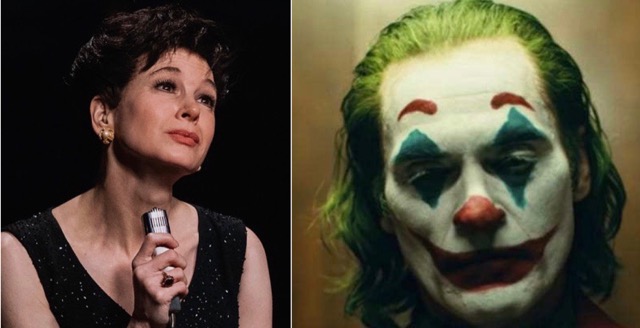 If you want to come out of the cinema with a smile on your lips and a song in your heart, you might want to avoid the way I spent last Saturday afternoon, going to back-to-back screenings of Rupert Goold’s new biopic of Judy Garland, starring Renee Zellweger as one of the premiere entertainers of the last century, and Todd Phillips’ dark “origin movie” of the Joker, starring Joaquin Phoenix as Gotham City’s “Clown Prince of Crime.” They make an odd couple, but aside from their devastating stories, the two films have this in common: Though we are really not yet into the late-in-the year Oscar-contender season, critics are already touting Zellweger’s performance as almost certain to garner her fourth Oscar nomination, while Phoenix’s sympathetic homicidal maniac has generated Oscar buzz for him as well, in a film that, though it has received mixed reviews here, won the Golden Lion (top prize) at the Venice film festival earlier this year. Like Zellweger, it would be Phoenix’s fourth nomination. Unlike her, he has not won before.

Another thing the movies have in common is how much their stories owe to the pharmaceutical industry. Teenaged Judy Garland, viewed as nothing but a commodity both by her studio and her blindly ambitious stage mother, was fed amphetamines every morning to give her energy for the day, and barbiturates every night to send her to sleep. It was a pill habit that she continued for the remainder of her life, climaxing in death by barbiturate overdose at the age of 47. As for Arthur Fleck, AKA the Joker, his problem is the opposite of Garland’s: An invisible man, alternatively scorned and ignored by the rest of society, Flick suffers from mental illness, in part apparently inherited from his once institutionalized mother, in part the result of brain damage inflicted in an abusive home. He is on seven different (unspecified) medications. But when city budget cuts lead to the shutting down of the clinic he visits weekly, and it becomes clear to him that society doesn’t really care about people like him, the off-his-meds Arthur becomes, well, a rather significant danger to that society.

The third and most important feature both movies share is the disturbing suggestion that our lives are determined in Darwinian fashion by our heredity and environment, shackles that we forever struggle to free ourselves of. Judy Garland, daughter of a mother who pushes her mercilessly into stardom, and born with a burning desire to be adored by an audience (she tells us of performing at the age of two, and having to be dragged off the stage), is conditioned to need pills morning and night, which she eventually enhances with alcohol. She’s also conditioned to be taken care of and told what to do by the Men in Charge, the Louis B. Mayers of her world, who eventually become her revolving door of husbands. As for poor Arthur Fleck, he is the child of an ill mother whose boyfriend ends up abusing him, sending him to the hospital with brain damage.  He grows up in poverty with little chance to better himself, with no one to take enough of an interest in him to help his situation, taking care of a sick mother who gives him no encouragement, and being denied by an indifferent society the one thing—his medications—that would allow him to break out of the prison of his determined personality. In both films we are in situations where, in the words of W.H. Auden, “each in the cell of himself is almost convinced of his freedom.”

This is a takeaway particularly from Joker. Phillips, best known as a director for his three Hangover films, takes a turn down a dark road in this one, for which he also wrote the screenplay along with Scott Silver (Oscar-nominated for 2010’s The Fighter). The script owes a great deal to Martin Scorsese’s films depicting dangerous social misfits, Taxi Driver and The King of Comedy. Scorsese veteran taxi driver Robert De Niro even appears in the film in a king of comedy role as a late night talk show host idolized by Arthur Fleck. The story focuses on a street clown with mental problems whose dream is to be a stand-up comedian, but as his unsympathetic mother unhelpfully says to him, “Don’t you have to actually be funny for that?” Sadly, Arthur is not. One of the symptoms of his mental illness, though, is a tendency to pathological laughter at inappropriate times: When we first see him, in fact, he is laughing hysterically in a meeting with his counselor, but we cannot be certain whether we are witnessing laughing or crying. And Arthur does not seem to be able to tell the difference. He also has some trouble with reality, being prone to fantasies about his neighbor Sophie (Zazie Beetz of TV’s Atlanta). Arthur has no actual girlfriend, or friend of any kind. He endures physical abuse, bullying at his job (which he eventually loses), the loss of public help in providing his meds, and extreme public humiliation, until he finally snaps, striking back at the system.

And the personification of that system? It is young Bruce Wayne’s billionaire father, Thomas Wayne (Brett Cullen of TV’s True Detective), an unapologetic oligarch, born on third base and bragging about scoring, who is running for Gotham’s mayor and scorns the less fortunate as a bunch of “clowns.” And when Arthur snaps, he snaps big time, ultimately becoming a kind of folk hero for all of the have-nots in Gotham, who don clown masks and riot in the streets, ready to tear the whole system down. The path from Arthur to Joker seems inevitable. Arthur finally seems not to have the capacity to make another choice. It is society itself that could have chosen a different path, and elected not to.

There is a note of inevitability, too, in Judy, as screenwriter Tom Edge (in a script based largely on Peter Quilter’s play End of the Rainbow) places most of the blame for Garland’s drug addiction and eating disorder squarely at the feet of Hollywood, and particularly of Louis B. Mayer (Richard Cordery of TV’s Dickensian), who is depicted in flashback scenes with the teenaged Judy (Darci Shaw of TV’s The Bay) as controlling her diet and private life, and undermining her self-confidence. But the bulk of the film focuses on one major event late in Garland’s life: a five-week engagement at the “Talk of the Town” supper club in London, where she performed about six months before her death in 1969. Like many recent biopics, Judy follows the pattern set by Spielberg and Tony Kushner in Lincoln of concentrating on a single important event to encapsulate the life of the subject, and so avoiding the pitfall of the disjointed plot so easy to fall into with a whole-life-story.

Here, we meet Judy being tossed out of her hotel home with her children Lorna and Joey Luft because of her failure to pay her rent and so forced to let the children stay with ex-husband Sid Luft (Rufus Sewell of TV’s Man in the High Castle). Faced thus with losing custody of her children and broke through the mishandling of her money (mainly by agents and ex-husbands), and virtually unemployable because of her own undependability with her emotional and drug problems, Garland takes the only offer she has: a London engagement for producer Bernard Delfont (Michael Gambon of the Harry Potter films). Delfont’s assistant Rosalyn Wilder (Jessie Buckley from TV’s Chernobyl) is given the daunting, and ultimately impossible, task of keeping the fading but feisty star in line. For a time, her efforts are assisted by the young huckster/promoter Mickey Deans (Finn Wittrock from The Last Black Man in San Francisco), who becomes Judy’s last husband and, in the film, her final disappointment (in real life, he was with her till the end and was the one who discovered her body).

In the end, unlike Joker,Rupert Goold (known chiefly as a major theater director in the UK) and Zellweger manage to create a story that is ultimately hopeful. Garland brings a lot of her disasters on herself through her own bad decisions, but also is able, when not strung out on pills and booze, to shine. Zellweger, remember, sang herself to an Oscar nomination in Chicago, and does her own singing here. She ain’t Judy, it’s true, but her renditions of songs like “For Once in My Life” and “Come Rain or Come Shine” are moving, and memorable. Garland’s resilience and optimism (you have to be optimistic to marry that many husbands) do come through here, and one charming (and totally fictitious) scene in which Judy has an impromptu dinner in the apartment of a gay couple who are longtime fans (played brilliantly by Andy Nyman of Ghost Storiesand Daniel Cerqueira from The Woman in Black) gives us a glimpse of the real Judy, free of the pressures of stardom and the anxieties of her personal demons. In the end, there’s something more here than a victim.

Both films have their issues: Some critics have worried that Joker may exacerbate the anti-social feeling of society’s disenfranchised who, like the clowns in the film, may simply want to tear the system down. I don’t share that fear, for, if I may quote W.H. Auden again, “poetry makes nothing happen.” The violently inclined don’t need a movie as an excuse. And just FYI, if you plan to see it, remember that R rating is truly earned by this film. As for Judy, it definitely plays fast and loose with the facts of Garland’s last hurrah in London, but it manages to portray the truth of her character.

In the end, Joker is a dark tale well told, mainly through Phoenix’s remarkable performance. But Zellweger’s Judy provides a ray of hope amid the detritus of a broken life. Three Tennyson’s for Joker, and half a Shakespeare besides for Judy and its glimpse of sunshine.