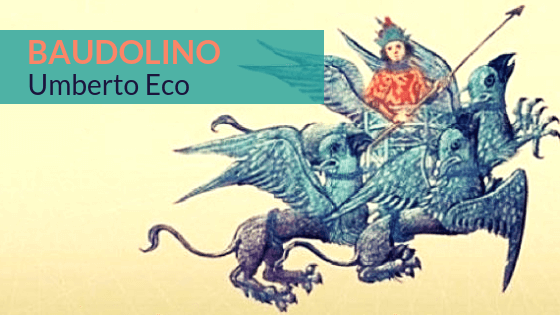 The historical Baudolino was an early eighth-century saint who lived in the Piedmont area of northwestern Italy. A hermit reputed to have prophetic powers, Baudolino eventually became the patron saint of the nearby town of Alessandria, his relics having been removed to the city after its founding some four centuries later. The title character of Umberto Eco’s sprawling 2000 novel is named for the patron saint of his native city—that same city in which Eco himself was born, making this perhaps the most personal of all Eco’s novels.

The city of Alessandria was founded the year 1168, and was originally built as a fortified city by the Lombard League, a confederation of northern Italian cities for the purpose of defending their traditional rights against the forces of Holy Roman Emperor Fredrick Barbarossa. Accordingly, its inhabitants named the city for Frederick’s great enemy, the Pope Alexander III. There is further a statue in the cathedral of modern-day Alessandria honoring a legendary peasant by the name of Gagliaudo, who according to local lore saved the city from a siege by the emperor Frederick when he gorged his cow with all the last remaining grain in the city and led it out so that he could be captured with it by imperial troops, who killed the cow and found its stomach stuffed with grain. Gagliaudo was able to convince them that the city was so full of grain they had no room to store it all, and so were giving it to their beasts. The ruse purportedly convinced the emperor to give up the siege and withdraw from Lombardy. Eco includes the legend in his book, and even makes peasant Gagliaudo the biological father of his protagonist, Baudolino.

But that doesn’t begin to introduce this wildly freewheeling book made up of loosely disparate episodes ranging across the known world of the twelfth and thirteenth centuries. Baudolino bounces from Italy to Germany to Paris to Constantinople to mythical lands east of India, and manages to combine a young man’s rise from obscurity to university life and the intrigues of an imperial court with crusading adventures and a quest for the Holy Grail and manages to throw in tall travelers’ tales and a locked-room murder mystery. Eco was a scholar in medieval studies as well as semiotics, and combined both interests in his widely popular and acclaimed first novel, The Name of the Rose. But critics and scholars were on much firmer ground with that novel: they could understand what it was—a realistic historical murder mystery with a unified plot and finite set of characters, set in a medieval monastery, with a Holmes-like detective steeped in the scientific method of Roger Bacon and the nominalism of William of Ockham. What’s not to like?

What has most perplexed readers of this book is their inability to fit it into any conventional notion of genre or form. By turns a Bildungsroman (reminiscent of Goethe’s Wilhelm Meister’s Apprenticeship), a historical mystery (like The Name of the Rose itself), a philosophical fable (at times recalling Voltaire’s Candide or Johnson’s Rasselas), a fantastic traveler’s tale (like the popular medieval Travels of Sir John Mandeville), but chiefly it falls under the broad heading of a picaresque comedy, and so has elements in common with everything from Don Quixote to such more recent exercises in fabulation as John Barth’s The Sot-Weed Factor.

Accepting Eco’s form as its own organic construct is the first step toward a true appreciation of this book. The second is accepting the slippery protagonist as the prince of fabulators. Baudolino, a self-confessed inveterate liar, relates his life story to the Byzantine historian Niketas Choniates—real-life author of a twenty-one book History of the Eastern Roman Empire covering the period 1118 through 1207, a text including a description of the sack of Constantinople during the infamous Fourth Crusade. It’s during this sack that Baudolino relates his life story to Niketas in a number of individual narratives over a period of several days. Like Niketas, we are regaled with the story of Baudolino’s adoption by Emperor Frederick and his unrequited love for Frederick’s wife Beatrice of Burgundy, his education at the University of Paris, his role in defending his home town against the Emperor’s forces, his marriage to and loss of his 15-year old girl bride.

Added to these episodes, which may be true, are his many fictions, beginning with his own poems that are passed off as the compositions of one of his friends, and his forging of relics—including nails of the True Cross, relics of the Magi for the Cathedral at Cologne, six preserved heads of John the Baptist, and the Holy Grail itself, which is in reality a wooden bowl used by his father Gagliaudo. Ultimately he forges letters from the legendary Prester John, mythical ruler of a fabulous Christian kingdom in the extreme East, and then leads a group of friends, with a forged map, to find Prester John—who must exist because they have letters from him. He and his companions, passing themselves off as the twelve biblical Wise Men, meet fantastical giants and pygmies, uniped “Skiapods” and creatures Othello described as “men whose heads do grow beneath their shoulders,” great floppy-eared Panotti, and half-virgin, half-goat Hypatias (female versions of Satyrs), all straight out of Pliny the Elder and Mandeville’s fantastic travels, and all seeing no difference between themselves and the other creatures other than their bitter differences in theology. At least that’s what Baudolino tells Niketas.

Meantime Baudolino’s companions form a motley crew of 12th-century philosophers, courtiers and scholars, including a rabbi named Solomon who wants to come along to the kingdom of Prester John in hopes of finding the ten lost tribes of Israel; a poet who turns out to be the famous historical Archpoet, most famous of the Goliards—writers of student verse in Latin; another romantic poet in love with a woman he has never seen and can only envision (paralleling remarkably the legendary biography of the famous Provencal troubadour Jaufre Rudel), the mythical Kyot (purported to be the source for Wolfram von Eschenbach’s Parzifal, a romance of the Grail); Robert de Boron, real-life author of the French romances of Joseph of Arimathea and Merlin; and a shady Byzantine priest named Zosimos who is even more of a trickster than Baudolino himself.

And so the book is a comic post-modern romp of intertextuality that really should delight the medievalists who read it. Beyond that it is an exploration of the ability of the human mind to create stories that ultimately shape the real world. Baudolino’s imaginary inventions, forgeries, and outright lies ultimately shape the external world even as they shape his own conception of his world: he believes in the Grail even though he created the relic himself. He believes in the kingdom of Pester John even though he bases his belief largely on his own forged letters purported to come from that kingdom. He even seems to believe in the clearly mythical beasts he claims to have seen in the far east, particularly the Hypatias, one of whom he seems to be in love with. In a book filled with theological debates as well, his experiences seem to give credence to the argument that God must exist if human beings have the ability to imagine Him. And ultimately, of course, the book underscores the role of the writer, the fabulist, like Baudolino and like Eco himself, in the construction of reality for their contemporaries. At the end of the novel, the historian makes the conscious decision not to include any of Baudolino’s revelations in his history—even though that omission is itself a falsification. But we are assured that one day, an even greater liar will come along and restore the tale. Which the lying author Eco has done.

On its first appearance, Baudolino was less well received than most of Eco’s previous books had been. It was too little like more conventional novels to be popular. In our current environment, as we deal with fabrications, mendacities and downright lies every day at the highest levels of our society and see how reality is daily shaped for us to a high degree, it is sobering to see what Eco portrayed as a philosophical proposition materializing in the real world in highly unpleasant ways. In Eco’s book, it is a splash of cold reality, revealing to Baudolino his own culpability in a way that he must, in the face of the facts, accept as true, that snaps him out of his imagined world. Perhaps Eco is showing us our own future through this imagined past.

I do like this book much more than its first reviewers did. Three Tennysons and half a Shakespeare for this one.

The latest Merlin Mystery from Jay Ruud, THE KNIGHT OF THE CART, will be available September 15, but you can preorder your copy today! To learn more about this and other Merlin Mysteries, visit https://encirclepub.com/product-tag/ruud/