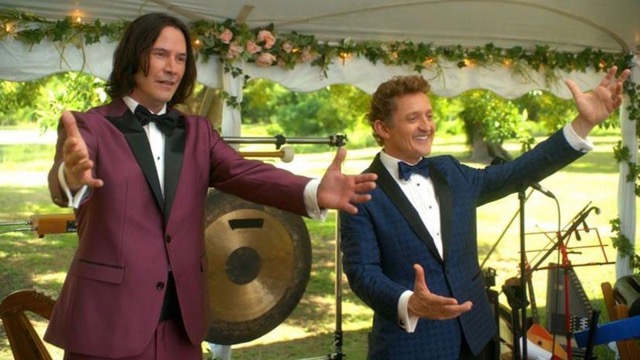 The cosmic quest of Bill & Ted Face the Music—the duo’s need to put together and perform a piece of music that will keep the entire cosmos from disintegrating and thereby save reality as we know it—is pretty much about as far from the pair’s initial quest in their 1989 premier (passing their history final) as it is possible to get. But if it seems unprecedented or a claim far beyond the power of so inconsequential a thing as music, think again. For thousands of years, the “music of the spheres” was a seriously held tenet of faith: the notion that the divinely conceived universe literally demonstrated the harmony of its design in a music that played forth as the heavens moved. Chaucer or Dante would have understood it. So it follows logically that, if that universe were coming apart, the way to save it would be to return it to that very literal harmony. Cue Wyld Stallyns.

The current film is not billed as a “reboot” but as the third installment of the Bill and Ted series, initiated with Bill & Ted’s Excellent Adventure in 1989 and followed by Bill & Ted’s Bogus Journey in 1991. If it seems unusual to have a gap of 29 years between installments of a movie franchise, that’s because it is. Chris Matheson and Ed Solomon, who originated the Bill and Ted adventures, had conceived of a third film by 2010 (which would have been just a 20-year gap), and both Alex Winter (who’s been devoting himself to making documentaries in the interim) and Keanu Reeves (who’s been doing a couple of little things like The Matrix and John Wick series) were on board to reprise their roles, but there was some difficulty in finding backers for the film, and while it remained in conversation and the principals kept saying it was going to happen, it stayed on the shelf until a distributor was found and the movie was greenlighted in May 2018, with production finally beginning in the summer of 2019. As with most films, COVID-19 has messed with distribution plans for Bill & Ted, but the film was finally released, simultaneously both in theaters and on demand, on August 28. It’ll cost you as much to stream it on Amazon Prime as it will to go to the theater, but of course you’ll be a lot safer that way.

Directed by Dean Parisot, who directed Galaxy Quest and Fun With Dick and Jane and was hired to direct this film back in 2012, the movie makes it clear that thirty years have gone by in the cinematic world of Bill and Ted just as in the real world: Their marriages to medieval princesses Elizabeth and Joanna—played here by Erinn Hayes (of TV’s Kevin Can Wait) and Jayma Mays (from TV’s Glee)—are in trouble, owing mainly to the lameness of Bill’s and Ted’s ability to adult. And they don’t understand why it’s not a good idea to go to couple’s therapy as a foursome, to the frustration of therapist Dr. Taylor (Jillian Bell of Brittany Runs a Marathon). Meanwhile their daughters Theodora “Thea” Preston (Samara Weaving of Three Billboards Outside Ebbing, Missouri—and the niece of Reeves’ Matrix co-star Hugo Weaving) and Wilhelmina “Billie” Logan (Brigette Lundy-Paine from Bombshell) are chips off the old blocks and show every indication of following in their inept fathers’ footsteps. Worst of all, the middle-aged Bill and Ted, having once been huge stars of the rock music scene, have now been reduced to playing at the Elks Lodge in front of 40 people who are there not to see them but because it’s two-dollar taco night. They have still never achieved that one great song—the song that would unite the world—which Rufus, their contact from the civilization of the future, had told them was their destiny.

Rufus, of course was famously played by comedian George Carlin in the first two films. Carlin died in 2008, and there was no move to recast the part: Instead, the filmmakers decided to pay tribute to the deceased “dean of counterculture comedians” by using old footage from the first film to create a holograph of Rufus, welcoming people to the palace of the future’s Great Leader.

Thus it is Rufus’s daughter Kelly (Kristen Schaal of TV’s Gravity Falls) who travels back in time in this film to bring Bill and Ted back to the future. (The character is essentially a tribute to Carlin, whose own daughter is named Kelly—and in fact Kelly Carlin appears in a cameo in this film as one of the character Kelly’s entourage in the future).

In a mid-life crisis of sorts, Ted tells Bill that he is no longer confident that they will ever successfully write the song that brings the world together. At this point Kelly arrives from the future and brings the pair back to meet with the future’s Great Leader (Holland Taylor of TV’s Two and a Half Men), Rufus’s widow and now the most powerful being in the world of the future. She tells Bill and Ted that they must complete the prophesied song and sing it with their entire band in a venue known as “MP 46,” in order to “save reality as we know it by uniting humanity across time.” And by the way, they have exactly 77 minutes and 25 seconds (i.e., the remaining length of the movie) to get this done.

Bill and Ted reason, probably wisely, that since they haven’t been able to come up with this world-changing song after thirty years of trying, they are not likely to do it now in less than two hours. So they begin a quest through time to track down various versions of their future selves in order to steal the song that they must have created from their older selves. Meanwhile, the Great Leader has lost faith in them, and believing that Rufus had interpreted historical data incorrectly, concludes that an alternative conclusion from the data is that Bill and Ted must be assassinated in order to save reality, and she sends a killer robot—an insecure “terminator” by the name of Dennis Caleb McCoy (Anthony Carrigan from TV’s Gotham)—to track them through time and kill them.

Appalled by her mother’s decision, Kelly travels back to the present to warn Bill and Ted, but finds them gone and meets Billie and Thea instead. The two daughters, gung-ho to help their fathers save the world, go on their own time quest that parallels their fathers’, but the girls go into the past rather than the future to put together the greatest group of musicians ever assembled: They track down Jimi Hendrix in 1967 and a young Louis Armstrong in 1922, then travel to the 18th century to collect Mozart, and the third millennium BCE to collect the legendary Ling Lun, supposed creator of music in ancient China. And if that is not enough, they speed back to the stone age to collect a drum-beating cavewoman named Grom who, for purposes of the film, seems to have been the first musical human. Rapper Kid Cudi even shows up for the band, playing himself and spouting a whole lot of theoretical physics jargon.

To describe how this all comes together in 77 minutes and 25 seconds would be to engage in way too many spoilers. It would probably not surprise you, though, to learn that all these forces meet up in the end for the great world-saving concert, in which Bill and Ted are joined by their old band-mate Death (William Sadler) from Bogus Journey, bringing along his electric bass.

I must admit that there are holes in this plot large enough to drive a semi through. In a situation where you have access to a time machine, how can it matter that you have exactly 77 minutes and 25 seconds to solve a problem? You have all the time in the world. And what sense does it make if you are Bill and Ted to travel forward in time, to find out what you did in the past (which is still your future)? If you go past the point in time when reality was going to go blooey, and you find yourselves still alive in the future, then things must have turned out fine, right?

But why worry about such details in a Bill and Ted film? As Chaucer said, there’s no point in making earnest of game. The movie is a lark. Its chief purpose is to give their fans another look at air-headed slackers in their later years—and as they travel into the future, in their later and later years. The confrontations with their future selves (who get steadily worse until the death-bed Stallyns) are absurdly comic, though they tend to turn out badly (as Bill tells Ted: “Your future you is a very pretentious dickwad”). But I found the daughters’ roundup of the super band of all time more interesting. The fact is, despite its premise, Bill & Ted Face the Music is not going to change the world. But it will probably make you laugh, and distract you from your pandemic blues. Two Jacquelyn Susanns and half a Tennyson for this one.