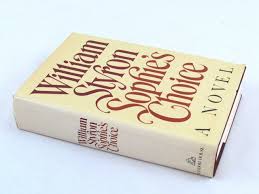 I’ve deliberately avoided this book for forty years. Sure, it was  a huge bestseller in 1979 and won the National Book Award for Fiction in 1980, and yes, it was honored with a spot on Modern Library’s famous “100 Greatest English Language Novels of the 20thCentury,” but I could not bring myself to read it. And the reason for that was pretty straightforward: I knew what Sophie’s Choice was and, having my own 5-year-old daughter and 2-year-old son at the time the book came out, I just did not need that image in my head.

The book, however, has sat on my bookshelf for those forty years, just staring back at me whenever I looked in its direction (third shelf from the bottom in the kitchen lounge bookcases, fifth book in). And my kids are in their forties now, so I figured I might be up to it. And what better way to entertain oneself during a pandemic than reading a good Holocaust novel?

Imagine my surprise when I started the book and found it not at all gloom and doom from beginning to end, but rather light and humorous as its narrator, “Stingo,” a 22-year-old aspiring novelist from Virginia come to New York in 1947 to seek his fortune, goes on about his difficulties in the editorial department of McGraw-Hill and his adventures in finding affordable housing in the city. The latter he accomplishes in Brooklyn, at a huge boarding house run by Yetta Zimmerman that is painted top to bottom in Army-surplus pink. Apparently pink was a color of which the army had a lot left over.

Stingo quits his job and tries to live frugally on what his indulgent father sends him while he works on his Thomas Wolfe-inspired first novel, but he has trouble working, or sleeping, at night because there is a couple in the apartment directly above him who make a great deal of noise with their rather athletic lovemaking. He soon meets them: a Jewish research biologist working at Pfizer named Nathan Landau, and Sophie Zawistowska, a Polish Catholic woman whose numerical tattoo on her arm marks her as a survivor of Auschwitz. After an initial encounter with an irate Nathan who is shouting at Sophie and belittles Stingo for his southern heritage, the young writer eventually befriends the couple and the three become inseparable friends.

To a large extent Stingo is a chorus figure, and a kind of buffer between the extreme characters of Sophie, the often depressive Auschwitz survivor, and Nathan, the often manic jealous lover who saved the anemic Sophie when she had fainted in the Brooklyn public library and nursed her back to life and to a reason for living: himself. For although many critics have suggested that the Virginian Styron is working within the tradition of the southern Gothic—characterized by grotesque and angst-ridden characters, and the presence of madness and horror, I suggest that the novel falls into the more universal category of tragedy. The novel is a tragedy both of Nathan, who carries his tragic flaw within his own psyche, and of Sophie, who bears both a family curse (her father was an outspoken anti-Semite and Nazi sympathizer) and the curse of her own choices. And Greek tragedy needs a chorus.

This chorus is the undisguisedly autobiographical young southern writer working on a book that sounds remarkably like Styron’s own first novel, Lie Down in Darkness. Stingo, writing their story decades after his friendship with Sophie and Nathan, even muses upon his book about Nat Turner’s rebellion and the criticism it evoked—charges of racism, appropriation, and historical inaccuracy—just like Styron’s own Pulitzer-prize winning Confessions of Nat Turner, his last book before Sophie’s Choice. It’s as if Styron anticipates more critical blowback about Sophie, and gets right out in front of it in his own person.

For Styron’s book is certainly not a typical Holocaust narrative. In the first place, Sophie is a Polish Catholic, not a Jew. It’s not that Styron minimizes the Nazis’ genocidal extermination of six million Jews, but is reminding history that the German death camps also included hundreds of thousands of non-Jews, including Romany people, homosexuals, the physically and mentally disabled, Jehovah’s Witnesses, and as the war progressed political enemies like communists and many Slavs, especially Poles, Serbs, and Russians. The first victims of Cyclon-B gas were Russian prisoners of war. And there were many who complained about this emphasis in the book. It is, after all, a little bit like the people who answer the “Black Lives Matter” assertion with the evasion “All Lives Matter,” and hence refuse to see the point. Yes, Styron is right in his depiction of Sophie’s suffering, but oppression of Poles was a political expedient for the Nazis, and not a carefully calculated deliberate genocide, as it was for the Jews (and the Romany). Styron’s characterization of Auschwitz as essentially a brutal slave-labor camp rather than an extermination camp is also flawed: It was both, and for Jews it was primarily the latter.

But none of this detracts from the effectiveness of the novel itself as an exemplum of human evil and its consequences. The real core of the book occurs in Sophie’s gradually more detailed, and increasingly more disturbing, revelations concerning her past. She first claims that her father was arrested and killed by the Nazis for being a fervent defender of Jews. But she ultimately reveals that he and his closest disciple, her husband, were actually virulent anti-Semites, though they were rounded up indiscriminately with other university professors when the Nazis conquered Poland. They were, after all, just lowly Slavs—to the Germans, they were vermin themselves. Sophie’s “Aryan” features and her knowledge of German get her chosen to be a clerical assistant to Auschwitz commandant Rudolph Höss. And she further reveals to Stingo her attempts to get her son accepted into the “Lebensborn” program, which would allow him to be adopted by a German family and raised as a German. She tries to seduce Höss with her sex appeal and with her legacy as the child of a famous anti-Semite, but none of this works. Finally, toward the end of novel, when she and Stingo are fleeing Nathan’s irrational rage, she reveals what happened to her daughter Eva.

The book’s title is suggestive in a number of ways. If you don’t actually know the climax ahead of time, you are probably assuming through the book that her choice is going to be a choice between Nathan, who saved her but threatens to destroy her, and Stingo, who is hopelessly in love with her from the moment he sees her. It might also apply to her choice at the very end of the book, a choice between life and death. But the choice everyone will remember is the choice she is forced to make between her children when she first arrives in Auschwitz. The choice will devastate you as a reader. Even when you know it’s coming. I thought, once I had finally read the novel, that I could now bring myself to watch Meryl Streep’s legendary Oscar-winning performance in the movie. But even after having just read the book, the scene was devastating.

There’s much more to the book than Sophie’s single choice. The omnipresence of human evil and guilt is underscored, for example, even in Stingo, whose sojourn in New York is being funded by a family inheritance that came ultimately from the sale of a family slave “down the river” in the ante-bellum south. No one’s hands are clean in this novel. Even Sophie’s. But what makes for tragedy is that the consequences for the tragic protagonist are far more severe than seems just. Sophie’s consequences are beyond the pale. Four Shakespeares for this one.