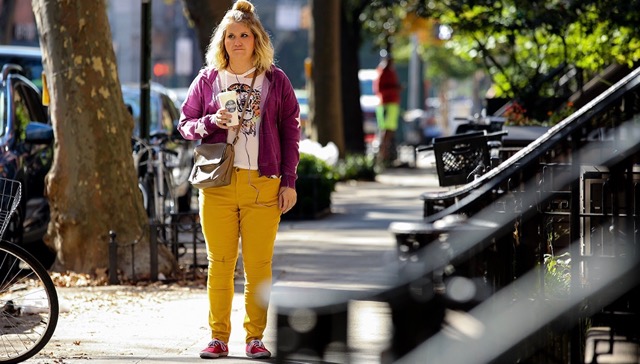 Running a marathon is one of the most difficult achievements in the field of sports. Not because it takes remarkable athleticism, like hitting a 100 mph fastball, or throwing a touchdown pass against an NFL defense, or lasting a round with a heavyweight boxing champ. The thing about running a marathon is that almost anybody who is not disabled can do it. No, you’re not going to run like a Kenyan if you weren’t born with the physical gifts to do so, but you can finish a marathon if you work hard enough and your body holds up to the pounding. You can start, as my wife did, by running a single block, then a mile, then a 5K, a 10K, a half marathon, and then the 26.2 miles that make up the distance of a marathon. No one who hasn’t done it or strained themselves trying understands the grueling daily grind and determination that make up the quest. But everyone who has done so will appreciate Paul Downs Colaizzo’s new film, Brittany Runs a Marathon.

Colaizzo, who wrote and directed the film, is a successful playwright (he authored the critically acclaimed play Really, Really), but this is his first venture into filmmaking. So far this venture seems pretty successful, having won the Audience Award at the 2019 Sundance Film Festival. Critics and audiences alike are liking this quirky film, and it’s not difficult to see why. Colaizzo based the story on the experience of his own close friend and former roommate—whose name is, well, Brittany (you get to see pictures of her in the credits)—and so hits on real-life humor and hardships that real people in the audience will recognize as genuine.

Brittany Forgler is played by Jillian Bell, already recognized as a skilled comic actress with impeccable timing and delivery, demonstrated in films like 22 Jump Street and Office Christmas Party. This time she is asked to carry a movie, playing a New Yorker who’s pushing 30 but still wants to spend all night partying and can barely make her rent. Visiting a Yelp-recommended doctor from whom she hopes to score a prescription for Adderall, she gets smacked with a bitter dose of reality instead, being told that her weight, blood pressure, and body mass index are all in the unhealthy zone. And she must face the unpleasant truth that unless she makes some lifestyle changes, she’s heading for serious health issues down the road. Bell is funny but also touching in her realization of this crisis in her life, and she is successful in making her quest for a healthier life one that we care about with her. Bell was committed enough to the role to have lost a good deal of weight herself in the making of the film to better present, and understand, what her character was going through.

But there is far more to the film than Brittany’s successful diet-and-exercise program that gets her into shape to run a marathon, difficult as that regimen can be. Brittany’s unhealthy body is merely a symptom of an overall unhealthy lifestyle that includes alcohol and drug abuse, sex with strange men in the bathrooms of sleazy bars, an abandoned career in advertising, and a general overall problem with self-esteem—the latter in part the cause and in part the effect of those other issues.

Much of this is reflected in, and exacerbated by, her relationship with her roommate and “best friend” Gretchen (Alice Lee from TV’s Take Two), who is a thin, beautiful and narcissistic wannabe Instagram “influencer,” and to whom she plays the self-described “fat, funny sidekick.” It’s a familiar character dating back at least as far as Sancho Panza. In most movies, it would in fact be Gretchen who was the lead, and Brittany a minor character there to provide comic relief and to be a foil to the protagonist. But Colaizzo has said that in this film he intended to “take a stock character from big American comedies, the ‘fat sidekick,’ and turn the camera squarely in her direction,” and that’s what he’s done.

Turns out that in this case, the “sidekick” role was a protective shell for Brittany, who striking off on her own and doing things for herself instead of following Gretchen’s lead, finds that her relationship with her girlfriend was never real and always depended on her repressing her own desires and needs in favor of Gretchen’s. But at the same time she is realizing this, she is resisting anybody else who might be more sincerely interested in her friendship. Turns out that, like Groucho Marx, she doesn’t want to belong to a club that would have anybody like her as a member.

This includes her upstairs neighbor Catherine (Michaela Watkins of TV’s Casual and Robot Chickens), whom she and Gretchen see jogging every day and whom they have nicknamed “Moneybags Martha,” because they know she has a family and an apartment in Manhattan but uses her flat in Brittany’s building as a studio for her art. Brittany resents any fitness help Catherine wants to give her, believing (quite wrongly as it turns out) that in-shape Catherine has a perfect life and could never understand Brittany’s real problems. It also includes Jern (Utkarsh Ambudkar from Blindspotting), who looks and acts like a kind of snarky Indian Jeff Goldblum. Jern is supposed to share the dog- and house-sitting job Brittany takes to make money for a gym membership, and turns out to have moved into the house he’s supposed to be watching. She resists him for a long time, believing he can’t possibly have her interests at heart.

This resistence to real relationships comes to a head in a devastating scene at a birthday party for her brother-in-law and substitute father Demetrius (Lil Rey Howery of Get Out), where after several drinks she lashes out with unprovoked venom at an overweight woman guest who has come to the party with a fit-looking male companion. It is an extremely painful scene in which Brittany spews forth all of her own self-loathing at a victim with whom she identifies. There is nothing simple about Brittany’s character, and Bell and Coraizzo are determined that we see her truthfully and see her whole.

One exception to this misanthropic side of Brittany’s character is her relationship with Seth (Micah Stock from TV’s Bonding), a fellow novice runner who has resolved to get himself into shape after he embarrassed his son by becoming winded in a sack race at the boy’s preschool.  She bonds with Seth as they bring up the rear their first day of running with Catherine’s running club, and, swayed by veteran runner Catherine’s extolling of the New York Marathon as a kind of Holy Grail for which to quest, the three of them make a pact to train for the event. But Brittany ultimately splits with Seth as well as Catherine when she thinks they are showing her pity. Can’t explain more without throwing in spoilers.

Suffice it to say that there are significant challenges and a roller coaster of ups and downs as Brittany makes her way toward her goals both in running and in human relationships, not to mention in self-image. The movie isn’t perfect—it would be nice to understand Brittany’s relationship with Seth better to understand why she doesn’t blow him off as she does everyone else. It would be nice to know a little more of Jern’s backstory to understand better why he is the way he is. But these are quibbles. Bell and Coraizzo have managed to create a character and  story that will resonate with anyone who’s ever tried to get into shape or tried to develop a more positive self-image. In other words, pretty much everybody. Except you Kenyans out there.