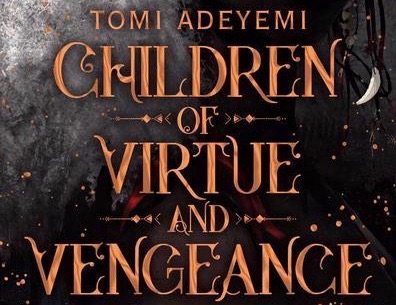 Children of Virtue and Vengeance

Harvard-educated Tomi Adeyemi was 23 years old when her debut novel, Children of Blood and Bone (2018) not only found a publisher but also garnered her a seven-figure advance, certainly one of the largest advances ever for a debut YA novel. Even before its publication the book (and projected trilogy) was bought by Disney/Fox 2000. The first book spent 90 weeks on the New York Times bestseller list, including a stint as number one among YA titles.

The Nigerian/American Adeyemi started writing stories as a youngster and says that she originally wrote realistic stories until she read her first Harry Potter book, after which she focused her attention on the creation of a complete and self-contained fantasy world, a la J.K. Rowling. Adeyemi created her world out of West African myth and legend and aspects of the Yoruba culture and Nigerian gods. These come together to form Orïsha, the fantasy kingdom of her novels.

In Children of Virtue and Vengeance, this sequel to her original blockbuster, Adeyeme takes up the story from where Blood and Bone left off. And like that first book, the story of Virtue and Vengeance is told alternatively by three different point-of-view characters: Zélie, the hero whose efforts successfully brought magic back to Orïsha in the previous novel, is now a maji Reaper; Princess Amari, the only surviving member of the royal family, or so she thinks, believes it is her duty to claim the throne and restore peace to the kingdom; and yes, Prince Inan—it shouldn’t be too much of a spoiler to mention that he is still alive, though badly wounded, after being brutally stabbed by his own father, the malignant King Saran, at the end of the previous novel.

A large part of the appeal of Adeyeme’s first book was its thinly disguised critique of racial prejudice in contemporary America—she has spoken openly of how appalled she was by police shootings of unarmed black victims in American cities, and one might easily suggest that one of the underlying themes of the Orïsha novels is “maji lives matter.” That first novel explored the conflict between the maji culture and the oppressive dictatorship that kept them in submission. In this one, the maji have gained power through the reinstatement of magic in Orïsha, but the ruling ethnic group has gained magical powers too, and of course they still hate the maji. Turns out it wasn’t fear of magic after all that fueled the oppressors’ bigotry, but hatred of the “other” represented by the maji, and a desire to keep their own power at whatever cost. That probably should come as no surprise to readers with any experience of reality.

What may be something of a surprise is that the Queen Mother, Nehanda, not only survived the great catastrophe that ended the first novel, but also gained super magical powers as a result, and now rules the kingdom in the name of Inan, who becomes king pretty much in name only. Turns out Nehanda was essentially the power behind the throne even during her husband King Saran’s reign, and her hatred of the maji fueled the former king’s oppressive dictatorship. Nothing will satisfy her now but genocide.

At the risk of offending a significant number of readers who may have received book two of the Orïsha trilogy as a Christmas present, I have to say that for me, this sequel was a major disappointment. The freshness and originality that characterized Blood and Bone seem largely absent in Virtue and Vengeance. Indeed, what plot there is consists of one battle after another, each one built up to seem as if it will be the climactic battle of the novel, but turning out to be only the prelude to the next battle, which again is built up to be climactic but then turns out to be just another prelude. I lost track of just how many battles there are in this book, but in spite of all the build ups to all the battles, none of them turns out to be decisive after all. And I don’t think that will be a spoiler since you will have figured that out yourself before you get to the last one. All of the battles actually become monotonous after awhile.

I wish there were more space given to character development. But most of that development took place in the first novel, and what time is given to it here is actually, I’m sorry to say, usually annoying. That is because the three point-of-view characters are all given to second-guessing each other and making disastrously wrong assumptions about one another’s motives, most of which misinterpretations could be fairly easily avoided if they’d simply talk to each other instead of making assumptions. But none of them bothers to do that, and whatever trust in each other they built up in the first book is abandoned in this one. I know that these are teenagers and that young people may be particularly apt to jump to conclusions, but their consistently misinformed jumps in this book stretch the limits of plausibility.

It may be that Adeyemi has a strong vision of a powerful ending for her trilogy, and was simply counting on this second book to be a bridge between the story’s engaging opening act and its memorable denouement. I can’t help looking at this second novel as a kind of misstep. It’s no Empire Strikes Back. No Two Towers either. It’s more in the realm of Indiana Jones and the Temple of Doom. But we can hope for a home run in the future. You may find, though, that getting through this middle book is something of a slog.